This Economic Note was prepared by Krystle Wittevrongel, Senior Policy Analyst and Alberta Project Lead at the MEI, and Emmanuelle B. Faubert, Economist at the MEI. The MEI’s Health Policy Series aims to examine the extent to which freedom of choice and entrepreneurship lead to improvements in the quality and efficiency of health care services for all patients.

Elder care in Quebec, and across Canada, is nearing a crisis. Seniors are having trouble accessing services, and the aging population will put immense pressure on the system. Moreover, while seniors overwhelmingly prefer to age at home, the care system in place has resulted in many being prematurely institutionalized.(1)

With a well-developed home care system, more seniors could receive care in their homes, reducing the dependence on institutionalization. One way to shift the focus from institutionalization to home care is through continuing-care policies and models that give patients a much larger say in what services they receive, and more importantly, where they receive them. “Cash-for-care” models, common across Europe, emphasize choice, consumer direction, the development of care markets, and market mechanisms.(2) Studies suggest that these models reduce the reliance on residential or institutional care.(3)

Cash-for-care (CFC) models give purchasing power to long-term care (LTC) recipients through direct public transfers to support care at home. In contrast, LTC in Canada is mainly funded and organized from the perspective of care providers, and most users have very little control over where and how they receive services.(4)

While CFC models vary from country to country, they generally involve monetary transfers that give individual users a choice in how to spend that budget, either by purchasing professional services or by compensating informal caregivers.(5) These transfers can take various forms: direct payments, care allowances, personal budgets, self-directed care, attendance allowances, or individual budgets.(6) In some countries where CFC is well developed, such as Germany and the Netherlands, there is relatively higher spending on home care, in contrast with Canada’s heavy institutional spending (see Figure 1). 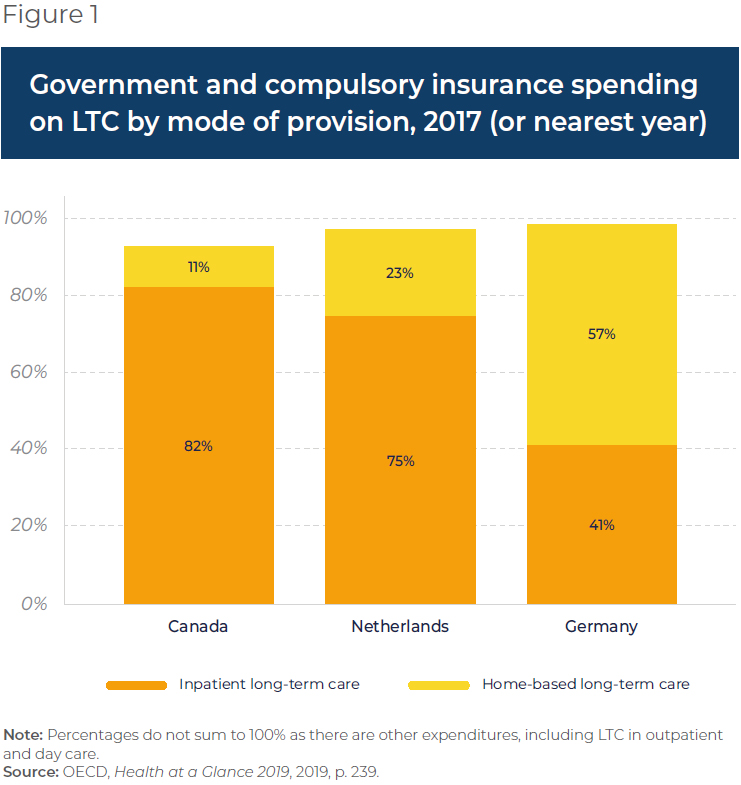 Despite differences in policy details, CFC models across Europe aim to facilitate both formal and informal home care through patient choice and competition between providers.(7)

One of the main principles of cash-for-care models is “free choice,” meaning that recipients can choose both the provider and the type of care. The choice of how, where, when, and by whom care is provided can be either explicit or implicit. In both Germany and the Netherlands, seniors can choose between in-kind services or cash to spend on the purchase of market services for their own care arrangements, including the compensation of informal caregivers.(8) However, there are regulatory distinctions regarding the use of the benefit that have had differing impacts in the two countries.(9)

In the German long-term care insurance system,(10) cash benefits can be transferred directly to seniors who then manage (with care coordinators) the organization of the care that best meets their needs.(11) Individuals who prefer the cash option, though, will receive a smaller subsidy than if they were to receive services, or care, in kind.(12) Research shows positive welfare effects for seniors following the introduction of this system in Germany, stemming from their added autonomy and greater self-determination.(13) In turn, greater self-determination leads to more independence, better health, and better adjustment to increased care needs.(14)

In contrast, the Netherlands requires a formal employment contract between recipient and caregiver.(15) This has contributed to a smaller proportion of recipients opting for cash payments compared to Germany,(16) likely leading to more restrained growth in informal markets for care. This may also explain why the proportion of overall spending on home care is higher in Germany. At the same time, though, as benefits in the Netherlands are quite generous,(17) most eligible seniors use less subsidized LTC than they are entitled to, regardless of supply.(18) As the system is well tailored to the needs of users, Dutch seniors’ needs are more likely to be taken care of at home unless institutionalization is a necessity.(19)

This contrasts with the situation in Quebec and across Canada, where there is little choice over the basket of services available,(20) and where home care support is lacking, leading to the over-institutionalization of the elderly. Indeed, it is estimated that relatives informally provide between 70% and 75% of the care required at home Canada-wide,(21) and a third of those providing informal care report being distressed.(22) According to Tracy Johnson, Director of Health System Analysis and Emerging Issues at the Canadian Institute for Health Information, “By improving home care services and community supports, caregivers could be better equipped to provide the proper care for those who wish to stay at home, and be less likely to be distressed.”(23) The ability to pay informal caregivers could help to alleviate some of their burden, encouraging them to continue providing care and thus avoiding unnecessary institutionalization.(24)

Empowering seniors through choice not only enhances their autonomy; it also promotes and fosters competition within the care-giving sector itself, thus facilitating the expansion of care networks. In fact, one outcome of the CFC model is increased competition among care providers resulting from consumer-directed care.(25)

One goal of Germany’s LTC insurance system was to reduce the barriers to entry faced by for-profit home care providers, thus opening the market and allowing them to compete with the previously dominant non-profit LTC providers.(26) As services for both institutional and home care can be offered by a range of public, for‐profit, and non-profit providers, recipients can choose where and who will provide these benefits, which has led to competition for users.(27) As care providers can practise their profession in both the private and public sectors, receive formal training, and are paid directly by the state,(28) these formal markets have developed in both the Netherlands and Germany. In Germany in particular, there has been a significant rise in home care options and provider capacity since the inception of the LTC insurance system, especially from the for-profit private sector, the non-profit sector remaining relatively stable and the public sector remaining quite small(29) (see Figure 2). 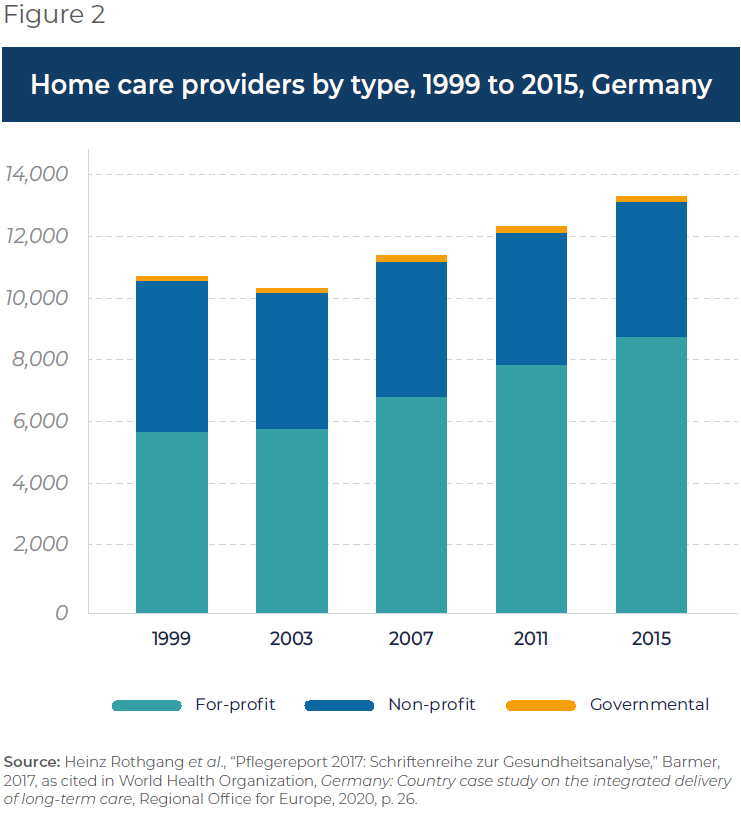 Cash benefits, on the other hand, are often associated with informal and grey(30) markets that arise with the payment of informal caregivers. As mentioned, in the Netherlands, a formal contract must be signed by the informal caregivers, as well as a justification by the user about the use of benefits.(31) In contrast, the German market is much less regulated, and users are not required to justify their use of benefits, nor are there any systemic controls on their use.(32) However, while informal German caregivers can be paid by the recipient, the amounts are generally not enough to constitute their main source of income. This has led to the creation of a private care market outside the control of social and labour regulations (that is, a grey market) employing low-wage workers, often immigrants.(33)

Despite differences in their structures, the CFC models in both the German and Dutch systems provide choice to those receiving benefits. This has resulted in the opening of care markets and the creation of new forms of employment, and ultimately impacted the organization of care work.(34)

In Quebec, although a majority want to age at home, there are concerns about accessibility.(35) By allowing Quebec seniors to choose the care that best meets their needs, these models could improve access to care by increasing the number of options and providers. In Germany, substantial growth in the sector after the barriers to entry for private for-profit providers were reduced has increased access, adding over 250,000 new jobs to the care market.(36)

Risks to Consider and Mitigate

The German and the Dutch cases show that continuing-care policies and models, such as cash-for-care, give users flexibility, and a voice in how and where they receive care. They also indicate, however, that there are potential risks to increasing the proportion of home care in Canada using such models, related to quality control and the containment of public expenditures.

First, in unregulated markets such as Germany’s, the use of unqualified workers can lead to poor care quality, which can have significant impacts on the health of the recipients.(37) However, there are safeguards which can be implemented, even in an unregulated system, such as a training program for informal caregivers, covered by health insurance funds,(38) and the periodic visiting of care recipients to ensure their overall situation at home is adequate.(39) In the Dutch system, quality is enforced by requiring that caregivers be officially hired in order to be able to receive any sort of compensation and employment-related social rights.

Second, while containing costs is an implicit aim for many of the cash-for-care models in Europe,(40) the issue of expenditure growth with increased access and uptake cannot be ignored. The CFC models in both the Netherlands and Germany were implemented in response to aging populations and to prior policies that were both costly and unresponsive.(41) Countries with better-developed home care do have the tendency to experience lower public expenditures in the long run. Indeed, evidence from multiple jurisdictions shows a decline in spending and long-term cost savings following the expansion of home and community care, since home care is generally more cost-effective than institutional care.(42)

However, evidence on the short-term impact of CFC models on public expenditures is mixed.(43) There might be short-term increases in spending due to the implementation of a CFC model.(44)

For example, when the Netherlands first adopted its CFC system in the 1990s, the basket of goods was very broad in scope and in entitlements, leading to a sharp increase in public costs for CFC benefits. Multiple reforms were needed in order to reel in expenditures.(45) This resulted in the provision of institutional care to those who need it most versus those who can age at home, and there was an 86% decrease in seniors requiring low levels of care in institutions between 2015 and 2019.(46)

By having more defined “basic needs,” Germany has been better able to keep a lid on expenditures. Special attention should thus be paid to the definition and scope of CFC benefits during the implementation phase.

Through the intentional focus on enhancing choice, developing care markets, and market mechanisms,(47) cash-for-care models can foster the development of home care and reduce the reliance on residential or institutional care.(48) While not all CFC models are created equal, there is no need to reinvent the wheel. Public authorities in Quebec and elsewhere in Canada should look at how such models work in countries such Germany or the Netherlands, in order to allow more seniors to age at home.