Make your voice heard! Send a message to Quebec’s Minister of Finance

Please copy & paste this message in your email and send it to: ministre@finances.gouv.qc.ca

I am writing to let you know about my deep concern regarding the state of Quebec’s public finances. As you know, the public sector debt has now reached over 300 billion dollars. This is the equivalent of $137,999 of debt per family of four, or $44,420 per taxpayer.

The Quebec government has to stop continually increasing the debt. Since the tax burden is already very high, the solution must involve a reduction in government expenditures so that we can eliminate the deficit and then start paying down the debt.

Thank you in advance for your time and attention.

Watch our short video “The Story of Quebec’s Debt”

We released this video in 2011. Updated data are available on this page. 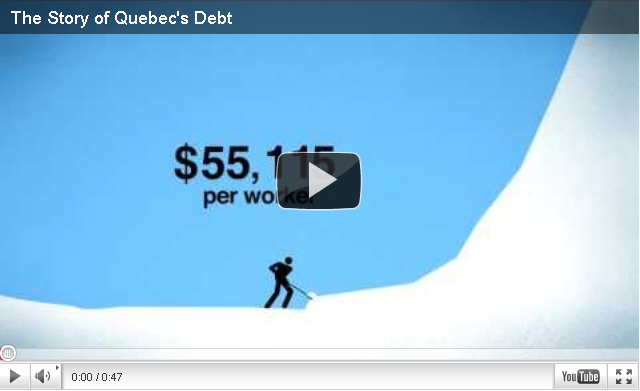 Based on data provided by the Quebec Department of Finance in its December 08 2022 budget update (which does not take into account Quebec’s share of the federal debt), we estimate that the debt will increase by $4.8 billion by March 31 2023, the equivalent of $42.8 million per day, $29,721 per minute, or $495 per second.