On Tuesday, March 22, the Quebec government tabled its 2022-2023 provincial budget. In this publication, we note the significant growth in portfolio spending in recent decades, taking into account the newly-released numbers, and we use different scenarios to illustrate the magnitude of this increase.

This Economic Note was prepared by Miguel Ouellette, Director of Operations and Economist at the MEI, in collaboration with Georgia Assy Hillel, Public Policy Analyst at the MEI. The MEI’s Taxation Series aims to shine a light on the fiscal policies of governments and to study their effect on economic growth and the standard of living of citizens.

On Tuesday, March 22, the Quebec government tabled its 2022-2023 provincial budget. In this publication, we note the significant growth in portfolio spending in recent decades, taking into account the newly-released numbers, and we use different scenarios to illustrate the magnitude of this increase. In fact, given the average annual growth rate of portfolio expenditures of close to 5.4% between 2000 and 2021, which is 0.7 percentage points higher than the increase in government revenues, we conclude that this path is unsustainable in the long term. Moreover, we conclude with a brief analysis of the debt burden on Quebecers.

Quebec Needs to Rein in the Growth of Its Portfolio Spending

Since 2000, the Quebec government’s yearly portfolio expenditures increased in constant 2021 dollars by close to $61 billion, with a nearly $43-billion hike just between 2009 and 2021. Every year, we spend an average of 5.4% more than the year before. This is not sustainable, especially when government revenues are not following suit, growing 4.68% on average.(1) Yearly hikes in spending and slower increases in revenues call into question the sustainability of Quebec’s spending habits.

When we compare the actual increase in expenditures to alternative scenarios, the difference is dramatic. We compared what the government actually spent with three counterfactual scenarios: if spending had 1) simply grown at the inflation rate, 2) mapped the inflation rate plus population growth, and 3) grown an extra 2% above the inflation rate plus population growth. According to the 2020-2021 public accounts, Quebec spent almost double what it would have if spending had grown at the inflation rate plus population growth since 2000 (see Figure 1). An average difference of $18.4 billion a year, or $404.3 billion over the past 22 years, could have gone toward reducing taxes and decreasing provincial debt under this scenario. Even adding another 2% of spending growth, Quebec would still have saved an average of $4.9 billion a year, or $107.5 billion over the 22-year period (see Table 1). To put this into perspective, depending on the chosen scenario, these savings are worth between 4 and 15 years of education spending in 2020-2021, or between 2 and 7 years of the sums devoted to health care for the same year.(2) 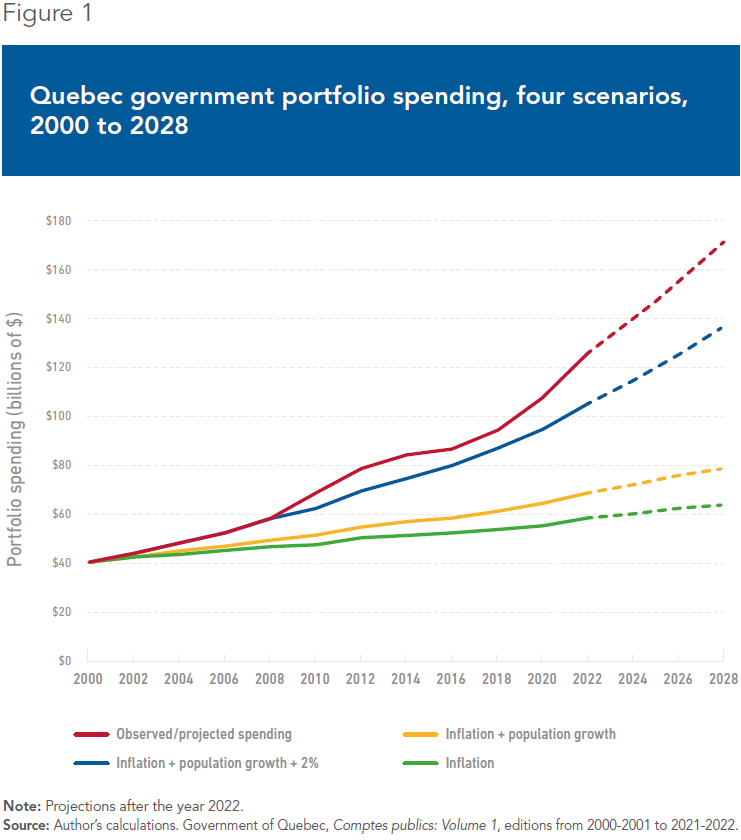 The latest budget tabled confirms the trend of recent decades. This year, excluding support measures related to COVID, the Quebec government spent around $127.8 billion on portfolio expenditures, meaning 4.9% more than last year.(3) As the population ages,(4) we’ll have fewer working-age adults and an increase in certain public costs, like health care expenditures, thereby increasing the necessary individual contribution to government revenues. At what point will we admit that there simply is not enough money coming in to keep this up?

Projections for the next half decade indicate that the gap between actual and alternative spending scenarios only widens. If the recent trend continues, in 2028, Quebec will be spending $171.9 billion on portfolio expenditures.(5) If the government had made an effort to keep spending growth to inflation plus population growth, we would have saved $961.6 billion between 2000 and 2028, or $308.3 billion even in the scenario with an extra 2% spending growth.

Raising government tax revenues would not be the best solution, though, as Quebecers are already among the most taxed in Canada.(6) In fact, if Quebec were a country, its tax burden would rank 9th highest among the 39 members of the OECD.(7) However, raising revenues by attracting new private investments is definitely part of the solution, a complement to lowering public spending growth.

In short, Quebec must slow down the growth of its spending to a more sustainable rate, by following inflation and population growth.

What We Get for Our Money

Not only is the growth in spending not sustainable in the long run, but the results are not what we would expect in terms of the size of the budget, and there seems to be no concrete justification. When we look at education and health care, for example, are we really getting our money’s worth? We often hear of the high dropout rate among young professionals in the education sector,(8) with some dropping out even before entering the workforce.(9) Even teachers with more experience are denouncing the increasingly difficult working conditions and the continued lack of support from the government.(10)

The quality of education also does not reflect what one could expect from the increased spending. Between 2006 and 2016, while the Quebec public education system experienced a 3.6% decrease in the number of students, the rate of spending per student increased by 18.4%.(11) Despite this greater spending on education, Quebec’s high school graduation rates remain the worst in Canada, about 20% lower than Ontario’s.(12)

Similar criticisms can be made about the provincial health care system, where just over 20% of the population does not have a regular health care provider, placing Quebec at the bottom of the list nationally in 2019.(13) As family medicine becomes less attractive to new graduates, not all physicians who retire are replaced,(14) leaving gaps in the system and wait lists stagnating. In 2021, the average wait time across the province was 599 days.(15) Nurses are also in short supply, and the ones we do have are forced to work compulsory overtime.(16) This already difficult situation was certainly not improved by the COVID-19 pandemic, during which the health care system was so strained there were discussions about an official policy of decreased quality of care.(17)

Economically, it does not look like Quebec is performing as well as one would expect relative to the size of its spending either. While Quebec’s GDP grew at an average annual rate of 1.43% between 2000 and 2020, the rest of Canada performed better overall, with an average annual growth rate of 1.64%.(18)

Spending more is definitely not the solution. Resources must be allocated in a more efficient way, including having more entrepreneurs providing services, while lowering spending growth.

The 2022-2023 budget also raises the issue of debt servicing costs. Portfolio expenditures went from representing around 84.4% of yearly revenue in 2000 to 97.2% in 2021,(19) meaning less and less of Quebec’s revenue is going towards paying back the provincial debt. In 2021, Quebec paid $7.69 billion in debt servicing costs. This represents 6.27% of total revenues for 2021; in other words, for every dollar of revenue, 6 cents went toward paying interest on the debt. While this might not seem like a lot, it represents more than a quarter of what was spent on education, and it would certainly have made a difference if invested in other programs, or simply not spent at all.

In the coming years, the cost of debt servicing will increase, notably following a potential rise of interest rates by the Bank of Canada. Indeed, after the decades-high inflation rates seen in early 2022,(20) the Bank has already started to increase their policy rate,(21) which is the reference rate on the market.

There is also the issue of intergenerational equity. A baby born today will inherit a debt of $34,032. As for a family of four, it now carries a debt of $136,128.(22) It is therefore important for Quebec to take action to lower the debt, and to lower the growth of its public expenditures.

The portfolio spending numbers released in Quebec’s 2022-2023 provincial budget are high, and the current trend needs to be reversed. The never-ending excessive growth in public spending since 2000 represents a significant amount that could have gone toward more efficient policy-making and decreased taxes for the population, as shown by our scenarios.

This growth is unsustainable, seeing as revenues have not grown proportionally, and even more so as the quality and conditions of public services, such as education and health care, do not reflect the magnitude of Quebec’s spending. As for debt servicing, costs should hit $8.8 billion,(23) and are expected to grow in the coming years given rising interest rates. By slowing down the growth of portfolio spending and dedicating more of its revenues to reimbursing its debt, Quebec could have a more realistic budget, and Quebecers’ taxes could come down to a more reasonable level.