Quebec’s robust economic growth in recent years has allowed the government to record a surplus each of the past five budgets. Between the 2014-2015 and 2018-2019 fiscal years, Quebec accumulated budget surpluses totalling $21.3 billion, a strong argument for a personal income tax cut, shows this MEI publication.

This Viewpoint was prepared by Daniel Dufort, Senior Director of External Relations, Communications and Development at the MEI. The MEI’s Taxation Series aims to shine a light on the fiscal policies of governments and to study their effect on economic growth and the standard of living of citizens.

Quebec is currently enjoying some of the strongest economic growth in the country. In 2018, the province was ranked second in Canada with 2.4% GDP growth, behind only Prince Edward Island. Halfway through 2019, the trend seemed to be continuing, with the province’s economy having grown by nearly 3% compared to the same time the year before.(1)

Thanks to this growth, the government has recorded a budget surplus each year since the 2014-2015 fiscal year. Quebec should seize this opportunity to stimulate productivity in the province by lowering the personal income tax rate.

Surpluses Due to Revenues

For the fiscal years from 2014-2015 to 2018-2019, Quebec’s cumulative budget surpluses totalled $21.3 billion. The Finance Department expects this to increase by another $10 billion over the next three years (see Figure 1). If the past is any indication, this projection could end up seriously underestimating the reality.(2) 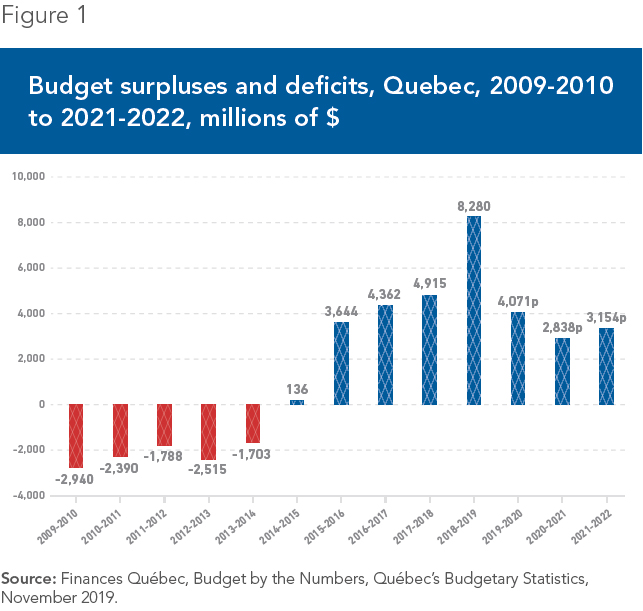 The government has used a large portion of these surpluses of the past five years, namely $10.5 billion, to make payments to the Generations Fund, destined to the reimbursement of the debt, a responsible decision for the management of public finances in the medium and long term. The net surplus for the period was therefore $10.8 billion.(3) The government did not plan to collect these sums; it had not budgeted for them, and it did not use them to cover its expenditures or to provide services to the population.

These surpluses were not achieved by reducing public services. Since Quebec’s public finances moved out of the red, in 2015, government expenditures have increased each year. In total, over the past five years, they have grown by 12.1%.(4)

Even if we accepted the premise that every one of the government’s expenditures is indispensable and is carried out optimally, and that their increase must necessarily follow inflation and demographic growth (which also assumes that no efficiency gains or economies of scale are possible), then the increase would have been 13.0%.(5) In comparison, government revenues increased by nearly 23%.(6) The surpluses are therefore almost entirely due to a greater and faster increase in revenues, and not to a reduction in spending, even a relative one.

What to Do with the Surpluses?

Before answering the question of what must be done with the budget surpluses, we must keep in mind that taxpayers’ money belongs to them, not to the government. Surpluses are no more and no less than the overtaxation of Quebecers. From this perspective, an income tax cut is as much a moral imperative as it is sound economic policy.

Admittedly, the previous government did reduce the tax burden somewhat, lowering the rate for the first income tax bracket from 16% to 15% and eliminating the health contribution, for a total of around $1.7 billion.(7) The current government has carried out a school tax standardization, an $800-million value.(8)

Compared to the nearly $120 billion of consolidated revenues that the government expects to collect in the next fiscal year,(9) however, these reductions remain minimal, and Quebec taxpayers are still heavily taxed in a North American context. The tax burden was 38.6% of GDP in Quebec in 2018, whereas the average for the rest of Canada was 32.2%.(10) Such a high tax burden reduces individuals’ purchasing power. Unsurprisingly, at $28,455, the disposable income of Quebecers was the lowest in the country in 2017, whereas it was in the middle of the pack 30 years ago.(11)

Allocating the budget surpluses to the reduction of the income tax burden for individuals could have a significant impact on their financial situation. In 2018-2019, the government surplus was $8.3 billion, or over one-quarter of the total tax collected on personal income ($31.8 billion). This means, for instance, that the government could have reduced personal income taxes for each taxpayer by an average of 10% and still generated a surplus, even after the payment to the Generations Fund.(12)

As there is talk these days of Quebec catching up economically, it is important to consider the role that taxation can play in this equation. Studies carried out by the OECD, among others, have shown that economies whose governments intervene and spend the most are generally the least dynamic, which is to say those that have the lowest growth rates.(13)

Quebec is experiencing a period of robust economic growth. The government should take advantage of these good times to reduce the personal income tax rate. Indeed, the Premier made the prosperity of Quebecers one of the key issues in the last election campaign.(14) At the latest economic update, the government also noted that improving Quebecers’ living standards requires productivity gains.(15)

Allowing people to keep a larger share of the fruits of their labour is an excellent way to stimulate productivity and raise their living standards. The very favourable budget situation is an opportunity for the government to give a break to taxpayers, who have made substantial contributions to the accumulation of the current surpluses.