Economic Note showing that such taxes have serious negative effects on the economy, and have been abandoned by most countries that have tried them

The idea of a Canadian wealth tax continues to inspire certain politicians and activists. Less than two weeks ago, the Parliamentary Budget Officer again responded to a request from a member of the House of Commons regarding the cost of such a tax. As recently as July 13, 2020, the media reported that heiress Abigail Disney and others of the “super rich” were calling for the introduction of a wealth tax to finance COVID-19 assistance measures. This publication highlights the inefficiency of this kind of tax, and the fact that it is less well-off taxpayers who pay for it in the end.

This Economic Note was prepared by Gaël Campan, Senior Economist at the MEI. The MEI’s Taxation Series aims to shine a light on the fiscal policies of governments and to study their effect on economic growth and the standard of living of citizen.

The idea of a wealth tax is still considered a viable option by many, despite clear warnings and the crippling economic consequences that have resulted from every real-life experiment with it. Its appeal may rely on its simplicity: “Let us take the money where it is! The rich can afford it.” Following this facile logic, government goes after the wealthiest with little political risk, as they represent a tiny fraction of voters.(1)

As proof of the appeal of such a measure, the Parliamentary Budget Officer responded again on July 8, 2020 to an NDP MP request regarding its costs.(2) As recently as July 13, 2020, the media reported on the public appeal of 83 of the “super rich,” including heiress Abigail Disney, in favour of the introduction of a wealth tax to finance COVID-19 assistance measures.(3) Indeed, the substantial sums spent by governments following strict, generalized lockdown in 2020 is leading some to call once again for a wealth tax, including Canada’s Broadbent Institute.(4)

However, the class struggle rhetoric underlying wealth tax initiatives is misguided. The evidence shows that the wealthy are significantly harmed by this tax. Their impaired capacity to invest—and ultimately their exodus—has serious negative effects on the economy as a whole, and therefore on every member of society.

Moreover, wealth taxes prove ultimately ineffective at increasing government revenues, so if government wishes to maintain its spending level, less well-off taxpayers end up picking up the bill after the rich have shielded themselves from it. Also, in a society like Canada—with a good measure of social mobility—a substantial portion of today’s “poor” are destined to become tomorrow’s “rich,”(5) and sooner than later, will have to deal with the direct effects of the wealth tax.

The Rich Are Affected by a Wealth Tax

To understand the impact of a wealth tax on rich households, it is important to appreciate the difference between incomes and assets. A wealth tax is calculated on the estimated value of an asset portfolio, even when these assets do not generate direct monetary income (such as owner-occupied homes, for example). If people do not have enough income to pay these taxes, they might have to sell some assets to meet their fiscal obligations. Often, these assets are not liquid, forcing distressed sales at below-market values. As a matter of fact, the OECD has identified lack of cash as a common impediment to wealth tax payments.(6)

Wealth taxes have a deceptively large impact on incomes. When a retired household worth $10 million and generating an average investment income of 6% is already taxed at 50% (or more in Canada) on its income, an additional 3% annual wealth tax would effectively cut their disposable income to zero. Living expenses would then have to be partially covered by the sale of some assets, which is to say, by decreased savings. In subsequent years, the eroding portfolio will produce less taxable income than it did in the previous year, forcing the household to sell more and more of its assets to maintain its lifestyle.

Naturally, many wealth owners will reshuffle their portfolios or move themselves and their assets out of the country in order to mitigate their exposure. The wealth tax will also alter their relative inclination to save and consume. If invested savings are taxed more, their preferences will shift toward early consumption and donations, thereby accelerating the shrinking of their invested assets. New ventures—the main source of new job creation—will find themselves starved of liquidity as wealthy investors are compelled to favour more mature, income generating assets at the expense of less mature, cash demanding investments.

Although governments initially downplay the importance of capital flight, failed experiments speak volumes. While 12 European countries still implemented a wealth tax in 1990, 8 had repealed it completely by 2017 (see Figure 1).(7) The countries that kept it had to compensate by either abolishing inheritance taxes (like Switzerland in 2004 and Norway in 2014), not having taxes on individual capital gains in the first place (like Switzerland), or delegating this tax levy to their regions (like Spain, with Madrid setting its current wealth tax at zero).(8) 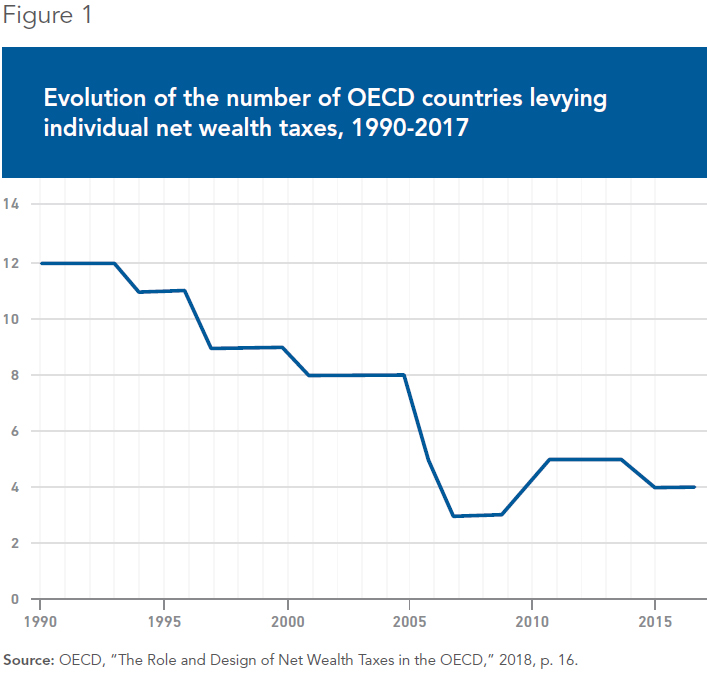 The Wealth Tax Is Counterproductive

Wealth taxes are also harder to collect than other taxes. When Austria repealed its wealth tax in 1994, it acknowledged a “high administrative cost that accrued in the data collection process.”(9) The value of shares in non-listed businesses, for example, are notoriously difficult to evaluate. Assessing the value of some possessions—like art pieces, jewellery, or rare furniture—is also tedious when it does not have a readily available market price. Their evaluation requires expensive expertise and the assessment exercise often remains subjective and easily prone to manipulation and fraud.

Retired and educated wealthy households with plenty of time on their hands can afford lawyers, accountants, and experts to fight back against what they could perceive as arbitrary claims from the tax collector. Bureaucratic costs in terms of human and financial resources related to the levy are likely the highest per taxed dollar—all the more so given that the actual revenue collected from wealth taxes is never up to expectations.(10)

Wealth taxes in Europe raised about 0.2% of GDP on average, with a maximum of 1% of GDP for Switzerland (see Figure 2).(11) With higher costs and lower outcomes, the ineffectiveness of the tax is clear. But it is compounded by the additional indirect loss of taxes due to capital flight. 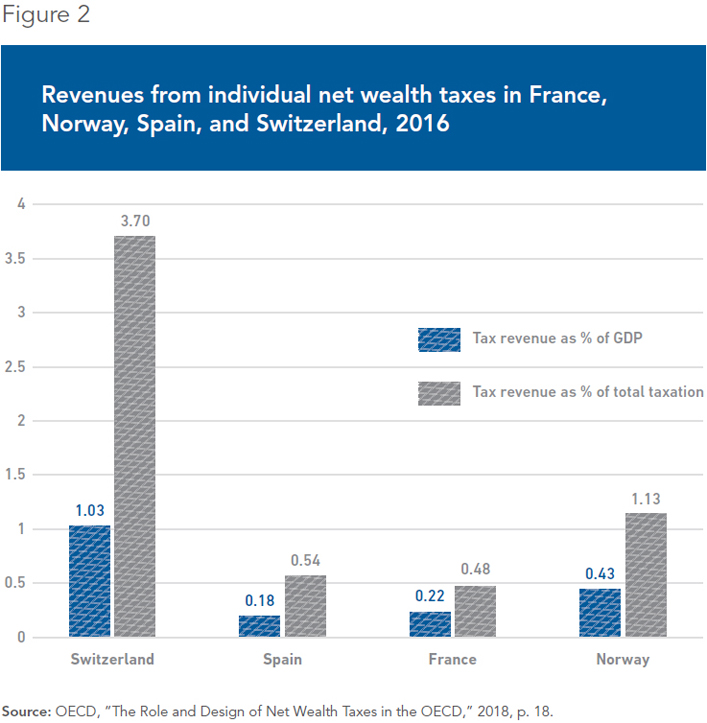 The French case is notorious because of the duration of its wealth tax experiment and because of the several impact assessment studies which have been conducted, both independently and by the government itself. With an average of 510 wealthy households leaving the country every year for 33 years, the migration of capital was estimated to be between €143 billion and €200 billion in 2015 inflation-adjusted euros.(12) This constitutes a significant loss of investment opportunity, job creation, and related taxes for France—and a corresponding blessing for the countries which welcomed the migrants.

As the tax base is eroding, the remaining taxpayers have to compensate for the overall reduction of tax revenues caused by the flight of capital. From an inequality reduction perspective, a wealth tax turns out to be counterproductive because once the most mobile among the rich are gone, new taxes must be raised to bridge the gap created by the exodus, and these new taxes will have to be paid by a larger base of taxpayers who are less wealthy and less mobile.

It’s Not Just a Problem for the Rich

Dividing citizens into broad categories—the rich and the poor—as if their interests could not overlap is misguided in more ways than one. The convergence of interests is considerable in an open, democratic society. Going after wealthy people as a group undermines one’s potential success as a budding entrepreneur, or conversely, one’s employment opportunities as a job seeker.

Wealth is the primary source of new job creation. If you are not an entrepreneur in a position to create a business which will generate enough income to cover your needs, then you are a job holder, and entrepreneurs provide jobs for you. The quantity and quality of jobs available depend on the extent to which entrepreneurs are free to thrive. This implies, although indirectly, that the wealth tax is also largely being paid by workers earning lower wages, and by the unemployed deprived of a private income.

Moreover, we live in a society where upward mobility is very real. A mobility study in Canada showed that 87% of the bottom 20% in 1990 had climbed the social ladder and belonged to higher quintiles by 2009. Even better, 40% of them had reached the top two quintiles over the same 20‑year period.(13) If you combine the constant lowering of the bar to belong to the 1% (due to rich household exodus) with the many people climbing the social ladder, chances are that many of the formerly “poor” end up belonging to the “rich” club faster than expected.

Indeed, wealth is mainly created, not inherited.(14) Most of us are not born with a silver spoon in the mouth, and entrepreneurship is one way to get ahead. Entrepreneurs on the rise today could become part of the top 1% in as little as five or ten years. A wealth tax is as much a deterrent to self-made wealth and social mobility as it is a penalty on inherited wealth. In the long run, it would hurt today’s non-rich more than today’s very wealthy who, in spite of the appearance of social justice that a wealth tax may create, are the most likely to be able to shield themselves from its effects.

Finally, people tend to underestimate their own wealth.(15) The number of Canadians potentially eligible to pay the wealth tax today or tomorrow could be much larger than what one would imagine. Consider retired federal public servants who enjoy at least 20+ years of life expectancy with a few million dollars of wealth in actualized pension payments. They probably would not consider themselves eligible to pay a wealth tax, but they could, depending on where the threshold is set.(16) The same goes for hockey players and popular artists whose wealth could be assessed on the basis of their contracts and their future royalties. Public servants might not be very mobile, but athletes and artists can easily relocate to tax-friendly jurisdictions at the expense of their local teams and fans.

The idea that we can easily tax rich people with impunity is flawed. Since most of their wealth is invested in firms, the wealth tax may dwarf their cash flow and force them to divest. As they limit their exposure, up to and including possible exodus, the other taxes they pay directly and induce indirectly with their job-creating investments become scarcer, and poorer taxpayers therefore have to bear a larger burden.

Experience has shown that wealth taxes bring little revenue despite their higher administrative cost of collection, thereby proving both ineffective and counterproductive when it comes to reducing inequalities. Consequently, they have been abandoned or emptied of substance by most countries that have tried to implement them. We should learn from their experience without having to go through the pain of it ourselves.

Finally, targeting the rich today would certainly hinder the conditions through which up-and-coming entrepreneurs can elevate themselves in society tomorrow. And as the most mobile among the rich depart and the threshold for belonging to the rich club gets lower, the constant skimming of the wealthiest would catch up with the rest of us sooner rather than later.