With federal elections reportedly around the corner, Canadian politicians will be putting forward policy proposals that they deem popular with the public. Left-leaning politicians have been promoting the idea of a one-time wealth tax in order to fund spending sprees. This publication takes a hard look at the one-time wealth tax recently analyzed by the Parliamentary Budget Officer.

This Viewpoint was prepared by Maria Lily Shaw, Economist at the MEI. The MEI’s Taxation Series aims to shine a light on the fiscal policies of governments and to study their effect on economic growth and the standard of living of citizens.

With vaccination rates high and COVID-19 case counts low, talk of an upcoming election has been building. Rumours have been fuelled by the Prime Minister’s public appearances across the country, promised funding for a variety of causes,(1) and now-evident discontent with leading a minority government(2) – which together paint a picture of a government in campaign mode. And so, while the federal government has remained silent on the matter to date, a fall election announcement is likely imminent.

One of the biggest challenges facing Canada’s politicians is the crippling amount of debt our government has accumulated in recent years – or more specifically, how they intend to deal with it. Confronted by the fiscal costs of the COVID-19 pandemic, there has been a resurgence of interest in wealth taxes as a way to redress the state of our public finances. Just two weeks ago, the Parliamentary Budget Officer (PBO) issued a report estimating the potential revenues that would result from implementing a one-time tax on “extreme wealth.”(3)

The proposed measure includes a tax rate of 3% on net wealth over $10 million and 5% on net wealth over $20 million to be paid over a period of five years.(4) Considering this threshold, such a tax would affect as many as 87,000 Canadian families, and raise up to $82.5 billion in revenue over five years(5) – in the best-case scenario. But the likelihood of collecting that amount of money from the wealthy is very low, because it assumes the affected families will not engage in tax avoiding behaviour. As such, the most realistic estimate reported by the PBO was a net revenue of $60.7 billion over five years, collected from more than 68,000 Canadian families.(6)

Where Would the Money Go?

If implemented, the government intends to use these funds to “offset the costs of the pandemic and climate-change measures, or to pay for part of the government’s work on Indigenous reconciliation.”(7) However, even in the best-case scenario, the proposed wealth tax does not come close to paying for the $240 billion(8) in COVID-19-related spending that was dished out in just eight months in 2020, let alone the $100 billion stimulus package contained in the latest budget.(9) In fact, even if we add up all of the new revenue-increasing measures presented in the budget, and then add the PBO’s estimate of the maximum revenue that could be collected from the one-time wealth tax (see Figure 1), the government’s spending would still burn through a full fiscal year’s worth of such revenue in just under sixteen days.(10) Put bluntly, the revenue-increasing measures are expected to generate an average income of $18.7 billion a year whereas the government intends to spend over one billion dollars a day in 2022. 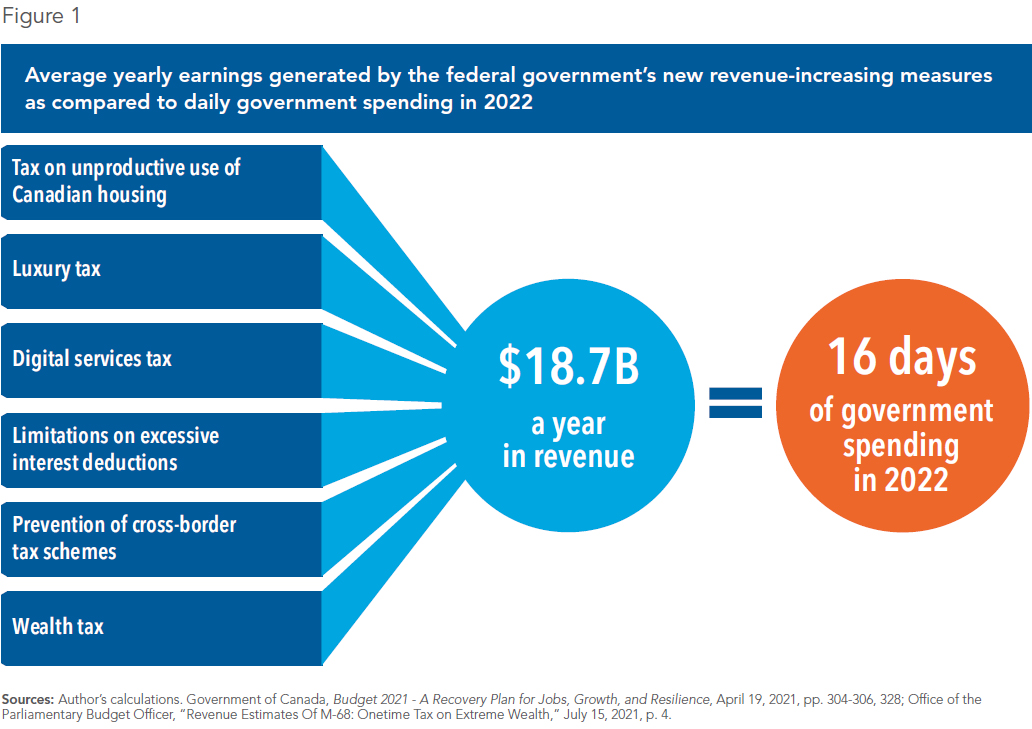 Those who support the idea of a one-time wealth tax also believe such a measure could partly address concerns regarding “rising extreme wealth inequality and generational fairness.”(11) But much of what they propose to spend that money on – such as the cost of past COVID-19 measures and climate change policies – would do little to improve living standards of people at the bottom of the distribution, or to make it easier for people to climb up the income ladder. It’s akin to losing weight by lopping off body parts – it achieves a numeric objective but is counterproductive for the underlying goal.

Let’s control spending rather than wealth

A good rule of thumb is that more often than not, we get less of something when we tax it. Introducing a wealth tax, no matter its form, sends a signal to a country’s inhabitants that wealth accumulation is discouraged. Yet, more wealth is beneficial to the population as it ultimately gets reinvested in the economy – in new businesses, in modernized factories, or in research and development.(12)

While it might be tempting to imagine that large accumulations of personal wealth just sit in a vault somewhere, that image is entirely inaccurate. In fact, there are opportunity costs associated with sitting on money in the form of cash, so the savings of the rich are quite active. More often than not, their wealth is tied up in illiquid assets, such as real estate or businesses with substantial operational costs.(13) As such, Canadian-owned companies may be pressured to sell to foreign investors by a wealth tax that the PBO readily admits raises issues of liquidity for those who cannot pay the penalty without selling a few assets to cover the cost.(14) The Canadian economy should not have to shoulder the burden of losing out on the wealthiest families’ investments, which serve as fuel for long-term projects, risk-taking entrepreneurship, job creation, and the development of untappedd potential. That is not to mention the charitable foundations funded by the fruits of their labour.

Long before the pandemic, the federal government has had its foot on the gas pedal, increasing its per capita spending to unprecedented heights. Instead of slowing down in the aftermath of COVID-19, the government has promised multiple new permanent spending programs in the years to come, such as a national childcare program and increased transfers to the elderly. These spending habits have contributed to substantially extending the timeline for when Canada may return to any semblance of balance. In fact, according to the PBO’s Fiscal Sustainability Report, if Ottawa maintains its current fiscal plans, red ink will run for almost 70 more years, with public debt not being eliminated until 2090.(15)

Overspending has become the norm, but that does not mean it is too late to turn a corner. Instead of grasping at straws to find new ways of increasing revenue, the government should invest just as much energy and creativity in finding ways to control spending.