Economic Note explaining the underestimated benefits of pharmaceutical innovation, and the key role that pricing plays in encouraging it

This Economic Note was prepared by Peter St. Onge, Senior Economist at the MEI, with the collaboration of Germain Belzile, Senior Fellow at the MEI. The MEI’s Health Policy Series aims to examine the extent to which freedom of choice and entrepreneurship lead to improvements in the quality and efficiency of health care services for all patients.

The federal government currently has the prices of drugs in its sights. It has made changes to the calculation method used by the Patented Medicine Prices Review Board (PMPRB) in order to lower the price ceilings imposed on prescription drugs.(1)

The same rationale also partly explains politicians’ proposals to impose government-run pharmaceutical insurance from coast to coast, replacing the provinces’ mixed plans.(2) These ill-advised public policies are based on a misunderstanding of the market for drugs, their underestimated benefits, and the key role that pricing plays in encouraging the arrival of new treatments.

Pharmaceutical Innovation Pays for Itself

The contribution of pharmaceutical innovation to health and well-being in the modern world is substantial. Between 1995 and 2012, life expectancy at birth in Canada rose by 3.6 years, from 78.0 to 81.6, while hospital use, measured in discharges per capita, decreased by 25%, largely thanks to new drugs.(3) A study of 30 countries covering the period 2000-2009 found that pharmaceutical innovation is responsible for fully 73% of the increase in life expectancy during this period, or a gain of 1.27 years in just a decade.(4)

These benefits are much cheaper than other interventions such as surgery, with a cost per life-year gained thanks to pharmaceutical innovation of as low as US$2,730.(5) This compares with an average of US$61,000 or more per year of dialysis, a cost benchmark across medicine.(6)

There is a growing literature on these offset effects. One US study estimated that if a 15-year-old drug is replaced by a 5.5-year-old drug, non-pharmaceutical spending falls by US$72 per capita on average, four times greater than the US$18 per capita the new drug actually costs.(7) Thus greater drug spending actually reduces total health spending compared to what it would have been given other reasons like the aging of the population. However, the price of the drug is more visible, and becomes an easy target for bureaucrats or politicians.

This offset effect is present across medicines and across conditions, ranging from twice the cost of the drugs in hospital care alone, up to eight times the cost of the drugs once all health system offsets are accounted for.(8) Additional benefits accrue from fewer seniors in nursing homes, fewer workers forced to rely on disability insurance, and other savings.(9)

Further research has documented these offset effects. One Canadian study found new drugs save an average of 4.7 times their cost in reduced medical expenditures.(10) Even in the US, where drugs are significantly more expensive, a government study estimated that a 1% increase in the number of annual prescriptions actually translates into a 0.2% decrease in annual heath care costs, working out to US$94 saved per prescription.(11)

One study covering seven OECD countries found that offset effect savings actually increase with time, so that each new drug provides US$5.90 in net benefits for every person in the United States, with those benefits doubling to US$11.40 in the long run.(12)

Beyond reducing costs, offset effects can also help compensate for doctor shortages. One Dutch study concluded that ten new drugs introduced from 1995 to 2007 to treat three categories of diseases saved so much in reduced health care use alone that they were equivalent to hiring 720 full-time health care professionals for each new drug introduced.(13)

The consistent pattern is that pharmaceutical innovation, in addition to its health benefits in lives saved and quality of life improvements, more than pays for itself in savings elsewhere, both in terms of health care and outside benefits.

This puts rising pharmaceutical costs in an entirely different light, suggesting we should use more, not less, drugs to replace other treatments. In particular, we should be looking to eliminate all obstacles to increasing pharmaceutical R&D in order to benefit as much as possible from these offset effects. ​

The High Cost of Research

Despite their substantial benefits, the rising use of drugs has led politicians to think of them as a drain on public funds and to target the industry that produces them for its allegedly unconscionable profits.(14) In reality, the industry itself is not as profitable as many imagine.

Total net income—profit per dollar of revenue—for the US pharmaceutical industry is, at 15%, higher than the average across all US industries, but remains lower than margins in similarly high-risk industries such as general real estate (16%) and videogames (16.6%).(15)

One reason for this more modest level of profitability is the high cost of research and development. The R&D-to-sales ratio is 18.7% for the pharmaceutical industry in the US, compared to an average R&D ratio of just 2.9% among all US industries.(16)

This six-fold ratio is driven by enormous and increasing R&D costs per drug—themselves largely the result of ill-advised government policies. According to a 2016 study, the cost of bringing a new drug to market has risen to nearly US$3 billion. The process takes 15 years on average, with another US$300 million in post-approval R&D. Over the past 20 years these costs have soared at an average rate of 8.5% per year, faster than drug prices, and far faster than the economy at large.(17)

Pharmaceutical R&D has become so expensive in part because many drugs tested never make it to market. The same 2016 study found that of all drugs that enter clinical testing, 40% fail Phase I, 64% of the remaining drugs fail Phase II, 38% of those survivors fail Phase III, and another 10% fail to make it through regulatory review to final approval. The overall probability of clinical success through all these steps comes out to just under 12% (see Figure 1).(18) 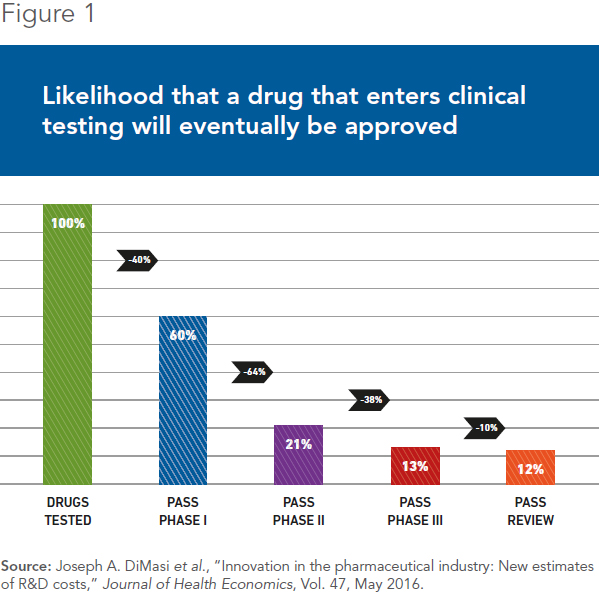 If seven out of eight drugs don’t make it to market, of course, those seven failures must be paid for by the profits of the single drug that does make it. This creates an obvious target as alleged price-gouging, but the fact of the matter is that many drugs are highly valuable for patients, and payers are willing to pay for them.

The Threat to Tomorrow’s R&D

In countries with substantial government intervention in the drug market, politicians have methodically forced prices down below total costs. This leaves one country, the United States, footing the bill for the rest.

To illustrate, the prices Canada mandates for pharmaceuticals would, if applied in the US, not only end R&D, but actually bankrupt the industry. Pharmaceutical R&D is particularly sensitive to lower prices. One recent study estimates a $100 drop in revenue is associated with a $58 drop in R&D spending.(19)

Given that R&D makes up 18.7% of pharmaceutical revenue, such a relationship suggests that pushing prices down just 16% could halve pharmaceutical R&D, while a one-third reduction in prices could, conceivably, wipe out pharmaceutical R&D. Of course, the industry would respond dynamically along the way to such a decrease, walking away from the most ambitious new products and focusing on the cheapest or least innovative drugs.

At present, Canadian prices for patented medicines are actually 70% lower than US prices. This gap has worsened dramatically, dropping from 57 cents on the dollar in 2008 to 30 cents just nine years later.(20) Recent changes to the PMPRB will artificially reduce drug prices in Canada even further.(21)

Europe is no better. In the UK, for example, they pay 28 cents on the dollar compared to Americans. In Germany and Switzerland, they only manage 33 cents, and just 22 cents in France (see Figure 2).(22) 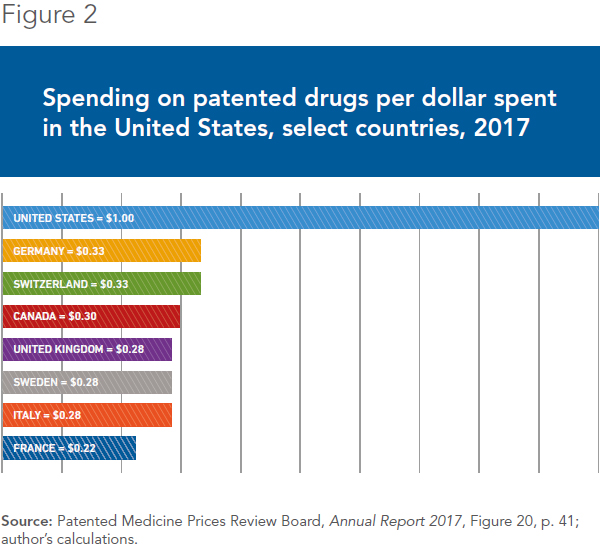 By tempting Americans to copy its seeming “free lunch,” Canada risks undermining the one market that actually sustains pharmaceutical R&D as we know it.

Pharmaceutical innovation has improved our lives tremendously, curing diseases and helping us manage symptoms in ways that would have astounded our ancestors. It has accomplished this progress, moreover, while generating savings elsewhere in the health care system that more than offset the cost.

But the need for innovative drugs, and for better versions of existing drugs, has not disappeared. Heart disease, cancer, diabetes, and many other conditions still rob people of years of life and health even in the richest countries. Meanwhile, research and development is risky and expensive, leaving access to new and better drugs vulnerable to government interference.

What would move Canada most toward sustainable pharmaceutical pricing would be to simply let private insurers negotiate market rates with drug manufacturers, allowing them to weigh the trade-offs of prices vs. benefits of new drugs while competing for subscribers. Then Canada could set its own reference prices as some average of those private insurers’ rates to ensure they are getting a fair price. The prices paid for drugs would then tend to represent sufficient profits for insurers to continue to make new drugs available to Canadians in a timely fashion, which would encourage research and benefit us and our children in the future.

As for reducing drug prices, a better way to do so would be to scale back the overregulation that needlessly inflates costs for drug manufacturers. With lower costs, sustainable R&D could occur at prices perhaps dramatically lower even than today. At the very least, the government should refrain from making things worse by nationalizing drug insurance and further constraining Canadian prices from reflecting the reality of this market that is so important to everyone’s well-being.