True to form, Oxfam released its annual report on global inequality the day before the opening of the Davos Economic Forum. This year again, their observation is the same: The wealthiest have too much of the world’s wealth.

First of all, it’s difficult to take the organization’s report seriously because of its methodology, which has been repeatedly criticized by economists of all stripes. Indeed, the new report repeats the same errors as previous editions. And in addition to these mistakes, which underpin Oxfam’s public relations campaign, the organization once again overlooks the undeniable fact that the global situation is improving.

The main indicators of the well-being of the population show this clearly.

Take life expectancy, for example. It has increased impressively in recent decades, so much so that the overall average today (72.6 years) is higher than the life expectancy of the top-ranked country in 1950 (72.3 years). The reasons for such improvement? In large part, it’s due to the enormous decline in infant mortality, but there has also been a general increase in life expectancy at all ages.

Another example is food. In 1920, the rate of death due to famine was 82.1 out of 100,000 people. A century later, the rate has fallen to 0.5, a spectacular decrease of 99.4%! And this great improvement took place despite the fact that the world’s population grew from 2 billion to over 7 billion. This means that more food is produced than before, for more people, and that supply is more stable.

Finally, Oxfam needs to be reminded that global poverty fell by three-quarters between 1981 and 2015. This reduction in the number of people experiencing extreme poverty has accelerated over the past decade, and the proportion is now below 10%.

The simple fact is that despite alarmist talk, things are constantly improving, thanks to economic growth and free trade. We forget this at our own peril. 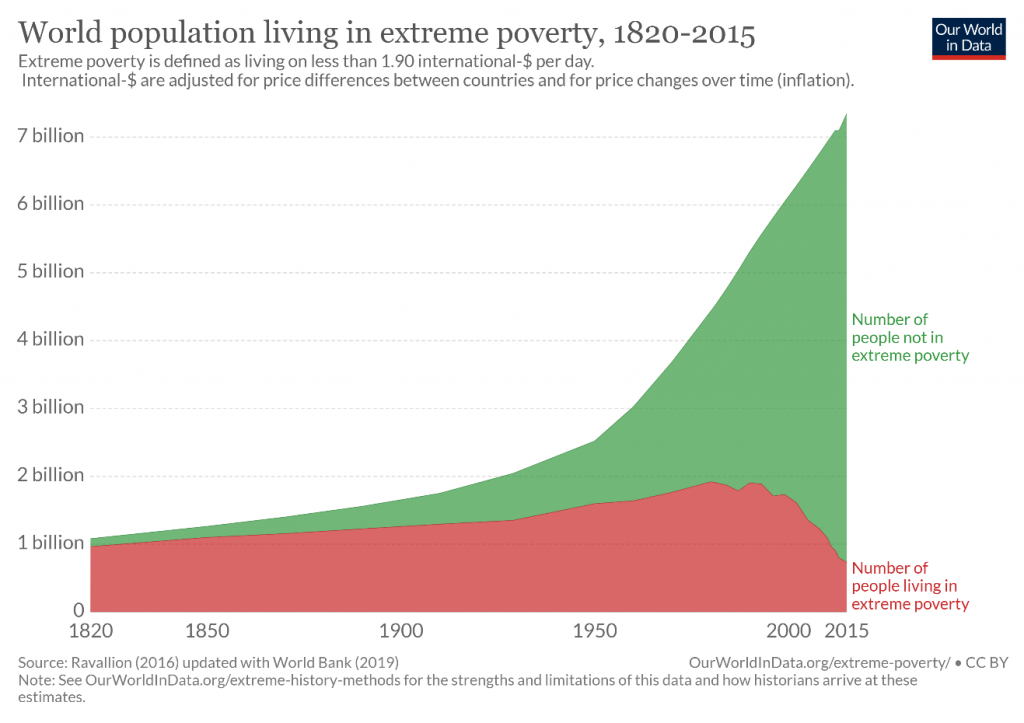