With the different levels of government intensifying their efforts to promote the use of the French language, an analysis of the economic history of Quebec identifies the real winning conditions for favouring the vitality of French. This publication shows the strong connection between the prosperity of francophones and the attractiveness of French in the province.

This Economic Note was prepared by Vincent Geloso, Associate Researcher at the MEI and Assistant Professor of Economics at George Mason University. The MEI’s Regulation Series aims to examine the often unintended consequences for individuals and businesses of various laws and rules, in contrast with their stated goals.

In the past decade, there has been a resurgence of debate regarding the vitality of the French language in Quebec.(1) Stemming from this, numerous proposals have been put forward to protect the French language and encourage its use.(2) Most of these are for direct policy measures to require the use of French at the expense of English, and so tend to privilege the stick over the carrot.

The ability to speak a language is a form of human capital which, just like formal education, increases a person’s potential earnings.(3) Studies looking at immigrants to Canada show that the size of these returns is significant. All else being equal, immigrants who cannot conduct a conversation in either official language have earnings 10% to 12% lower than immigrants who can. The effect is larger (12% to 14%) for those who completed their schooling before immigrating.(4) Moreover, there is a rich body of evidence suggesting that people are sensitive to the returns from speaking a language in ways that explain rates of multilingualism.(5)

The two main economic determinants of the returns to learning a given language are i) the size of the group speaking the language and ii) the attributes of the members of that group. Simply put, if the members of a large linguistic group are all highly educated, the economic returns to the human capital embodied in the mastery of that group’s language are greater than if the group is smaller and its members less educated.

If the goal is to see rising rates of French usage in Quebec, one should find ways to increase the returns of speaking French relative to other languages. The size of the francophone community is difficult to affect directly through policy. However, the attributes of the members of the francophone community can be affected by public policy (in ways that can then later augment the size of the community, which would in turn further increase the attractiveness of the language). The economic history of Quebec illustrates the power of such policies.

The History of Language and Wages in Quebec

Until the 1940s, francophones in Quebec had distinctly lower levels of human capital than anglophones in the province.(6) This had three consequences. First, one must understand that there is a complementary relationship between human capital and other forms of capital: A piece of equipment is more productive in the hands of a skilled worker.(7) The high level of human capital embodied in anglophone workers attracted other forms of capital to be matched with them. This complementary relationship meant that anglophones had greater returns from education (in the form of higher earnings) than francophones.

The second consequence was that when immigrants arrived in Quebec, English was the more attractive language to learn. As a result, while roughly a third of immigrants spoke both French and English, the vast majority adopted English first and used it more extensively.(8)

However, in the 1940s, there was an important reversal following a series of educational reforms that compelled staying in school longer. This caused a rapid increase in educational achievement in the province. Whereas Quebec had been losing ground relative to the rest of Canada from 1911 to 1941, it subsequently started bouncing back and had closed a substantial portion of the gap by 1961.(10) Importantly, most of the post-1941 educational convergence was driven by rising levels of educational achievement among Quebec francophones.

The rise of a more educated and highly skilled francophone workforce made it more attractive to match them with complementary forms of physical capital. As this happened, the rate of return on human capital for francophones gradually converged with the rate of return for anglophones. This is best observed by considering birth cohorts to capture the effect of the educational reforms of the 1940s. For those born just before the reforms, the francophone cohort had a rate of return on education of 11.9%, as opposed to 19.3% for anglophones. The francophone cohorts most affected by the reforms saw their rates of return increase to 18.5%, compared to 18.7% for their anglophone peers.(11)

There are other signs of greater matching of physical capital with francophones. Consider, for example, the case of business ownership. During the first half of the 20th century, rates of francophone ownership of firms declined gradually, and they stood at 47% by 1961.(12) However, this trend was reversed during the 1950s or 1960s(13) as those rates surged upward, reaching 67% by 2003.(14) This greater level of ownership of firms by francophones was particularly pronounced in the financial sector, where francophone ownership grew from 26% in 1961 to 60% by 2003.(15) 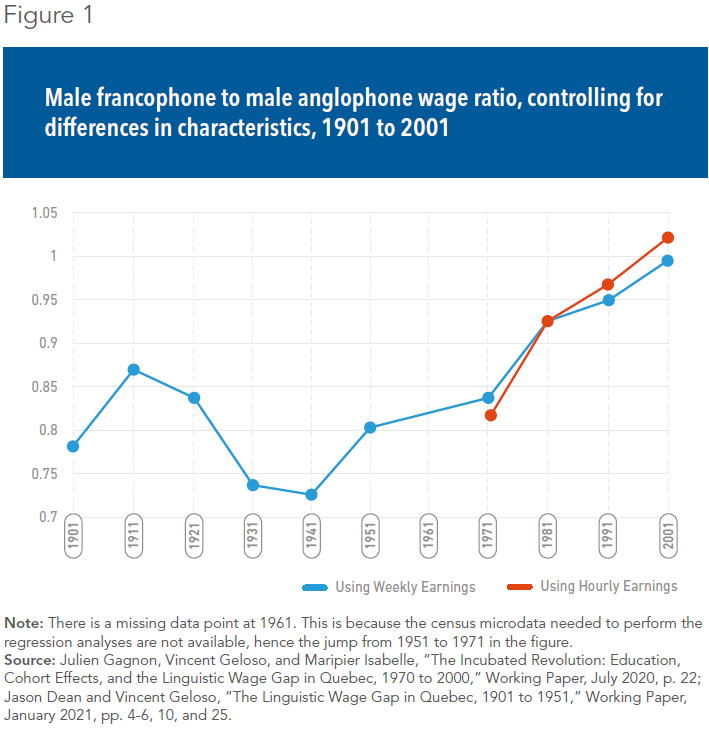 Moreover, it is worth pointing out that Figure 1 understates the pace of convergence experienced after the 1940s. The first cohort of francophones affected by the reforms of the 1940s actually showed no significant wage penalty relative to anglophones.(17) However, these more educated cohorts only gradually entered the workforce, so that there appears to be a delay in reaching parity. In truth, by 1978, there were no longer any significant differences between young francophones and young anglophones.(18) Moreover, studies that extend the comparison past 2001 show that unilingual anglophones today actually earn less than unilingual francophones, all else being equal.(19)

The collapse of the wage gap speaks directly to the issue of the economic vitality of the French language. As expected, the economic vibrancy of the francophone community that emerged as a result of more educated workers and more capital being matched with these workers made French a much more attractive language to master. Three facts support this connection, and all of these facts involve changes in the decades prior to the adoption of Bill 101, which means that language laws play no role in explaining these trends. First, rates of bilingualism among anglophones began to increase steadily.(20) Second, the share of allophones who could speak both official languages, as opposed to only English, began to increase.(21) Both non-francophone groups exhibited rates of French knowledge equal to 28% for women and 36% for men in 1951. By 1971, these proportions had jumped to 37% and 43%, respectively,(22) and continued to increase thereafter.(23) Third, there were signs of a rising propensity for immigrants to send their children to French schools (although the rate was admittedly well below what has been observed since Bill 101).(24)

These facts point to a strong connection between the economic attractiveness of the French language and its long-run demographic vitality. Such a connection provides us with an important policy lesson: The road to French demographic vitality can be a roundabout one. The educational reforms of the 1940s were not meant to directly deal with the attractiveness of the French language among anglophones and immigrants. However, they did end up increasing its attractiveness. As such, policies that focus on improving the prosperity of the francophone community may yield larger and more impressive long-run returns.

Such policies should try to replicate the effects of the educational reforms of the 1940s. Today, francophones in Quebec still exhibit lower levels of educational outcomes than anglophones. A study by the Institut National de la Santé Publique du Québec showed that in 2006, 23% of Quebec’s anglophone population over the age of fifteen had at least a college degree, compared to 15% for francophones. The study also found that high school non-completion for this age group was 25% for francophones versus 20% for anglophones.(25) Quebec Education Department data, for its part, showed that in 2013, high school graduation rates for that year were almost ten percentage points higher in the province’s English school boards than in its French school boards(26) (see Figure 2). 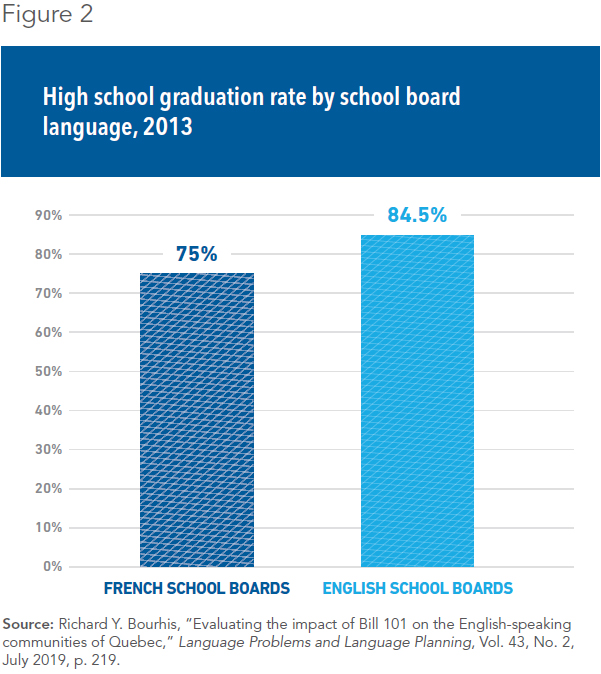 Policies aimed at increasing the returns to education, reducing high school dropout rates, and increasing technical college and university completion rates should thus be considered as viable ways of securing the status of the French language in Quebec.(27) That is to say, higher levels of human capital among francophones would increase the productivity of that group in ways that make it more attractive for anglophones and allophones to learn French in order to interact with that higher-productivity group.

There are, of course, other policy avenues available to governments that would more directly attempt to secure the position of the French language. But in light of Quebec’s economic history, these seem to offer little promise of yielding sizable effects. None of the policy proposals currently being discussed (extending Bill 101 to CEGEPs for instance) seem to offer anything approaching the effects of mandatory elementary and secondary schooling in French that resulted from Bill 101. This is because we have likely taken the stick approach as far as it can go. At this point, only carrots are likely to lead to a wider use of French in Quebec.