With students across Canada preparing to go back to school, the MEI released this study on how to improve educational outcomes. Vincent Geloso, Senior Economist at the MEI, concludes that it is an illusion to think that the quality of education will be improved merely by increasing government spending.

This Economic Note was prepared by Vincent Geloso, assistant professor of economics at George Mason University and Senior Economist at the MEI. The MEI’s Education Series aims to explore the extent to which greater institutional autonomy and freedom of choice for students and parents lead to improvements in the quality of educational services.

In the latest provincial budget, we learned that six in ten schools in Quebec are in poor physical condition. This prompted the government to announce a new round of investments to remedy the situation.(1) However, similar “crises” have erupted on multiple occasions in recent decades: disappointing performance on standardized tests, low completion rates, violence in schools, lack of preparedness for post-secondary studies, etc. Each of these crises prompted political actors to request further rounds of investments, reinvestment, new investments, refinancing, or improved financing. In other words, the conversation always revolves around securing improvements in educational outcomes by increasing the quantity of inputs used.

Increasing the resources devoted to the provision of education, however, sidesteps the crucial issue of how resources are used in the first place. The reality is that Quebec could gain immensely by downsizing the activities of the department of education (notably by reducing administrative staff), reallocating school funding so that parental choices determine where taxpayer funds go, and introducing greater school autonomy. This will likely lead to reduced government expenditures, as well as improved cognitive and non-cognitive outcomes for students.

There exists a large empirical literature, looking at both historical and contemporary cases, documenting the weak relationship between input levels and educational performance.(2) At best, the relationship shows a weak positive impact such that only very large sums per pupil produce additional benefits.(3) That small effect is also highly conditional on the type of spending (for example, buildings and staff vs. child-oriented materials).(4) At worst, the effect can actually be counterproductive under certain conditions.(5) This finding, which is widespread in American and international studies, is borne out by Quebec data showing that performance on PISA tests for mathematics appears to have been quite stable (-1.5%) since 2006 even though spending per pupil has increased substantially (+18%) (see Figure 1). 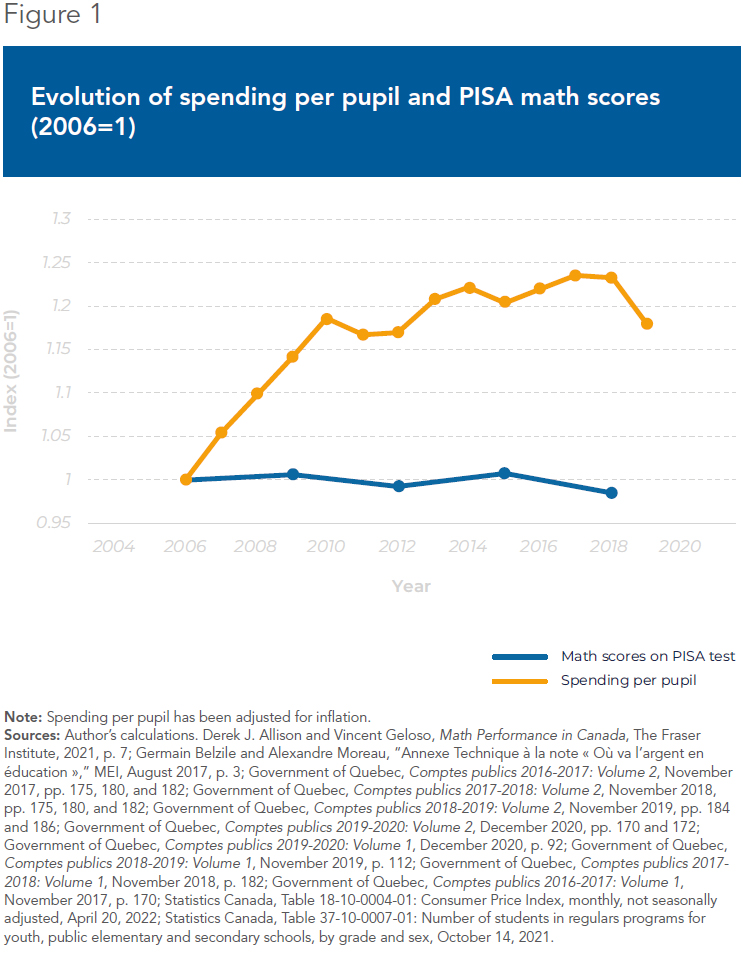 This is consistent with standard economic theory, which holds that it is not only the quantity of inputs thrown at the provision of a good or service that matters; the way in which the service is provided matters just as much, if not more. In other words, the organizational structure of the system is very important. Moreover, as the literature clearly shows, systems that decentralize management to the local level, introduce choice and exit options for parents, and create local voicing mechanisms (such as participating in schooling associations) heighten the efficiency of any given spending level.(6) Generally, such systems work by having the state disengage from producing the service and concentrate solely on financing, which is also tied to parental choices.

There are three key reasons that explain these results. First, there are wide variations in the socio-economic characteristics of children even at the local level. As a rule, “one-size-fits-all” policies tend to yield disappointing outcomes for such heterogenous populations. Greater decentralization and school autonomy, on the other hand, allow for customization such that schools can organize the resources they obtain in ways that are most productive given the specific populations they serve. Second, parental involvement tends to be higher in decentralized systems, and this creates a positive feedback loop between school administrators and local populations, which helps improve customization. Third, tying funding to parental choices gives parents an exit option, which in turn generates strong incentives for schools to provide higher-quality customization.

In other words, it is possible to reduce educational spending while still improving outcomes by changing the organizational structure of the educational system. The American literature on the cost-effectiveness of charter schools provides a good empirical illustration of this. While US charter schools are publicly funded, they are given greater autonomy than traditional public schools in exchange for meeting certain performance criteria. One recent study compared cost-effectiveness across seven major American cities and found that $1,000 of public spending secured schooling performance that was from 4.5% to 92.0% higher in charter schools than in traditional public schools (see Figure 2). This cost-effectiveness advantage, echoing the findings of many peer-reviewed articles,(7) is attributable to the flexibility afforded by greater autonomy, which allows methods to be adjusted to local communities. 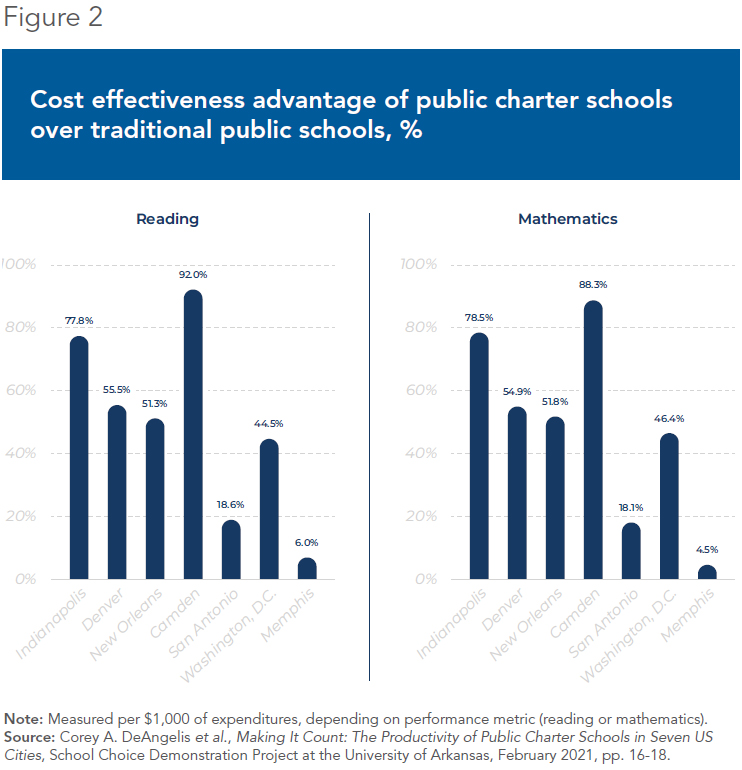 The benefits of this customization, which go beyond mere cost-effectiveness, are quite considerable, and fall into two categories: cognitive outcomes (namely, performance on test scores) and non-cognitive outcomes.

With regard to cognitive outcomes, the literature is quite robust, as it relies on randomized control trials (RCTs). RCTs are well regarded in the economics profession because they recreate experimental conditions so as to directly assess the causal effect of a given treatment—in our case, the introduction of parental choice and school autonomy. The “randomized” part refers in this case to the fact that parents get to exercise choice if they participate in a lottery system that allows some of them to send their children to other publicly-funded schools or receive school-vouchers. Because the lottery is random, we can compare the effect on children who were selected and those who were not in a manner that allows statements about the causal effects of parental choice and school autonomy.

The majority of RCTs testing increases in parental choice find a clear positive effect on cognitive outcomes. Indeed, 10 of the 17 RCTs found statistically significant gains on mathematical and reading scores, 4 found no effects, 1 found mixed effects, and 2 found adverse effects.(8) Moreover, the two studies that found adverse effects concerned cases where the gains in school autonomy and parental choice were small compared to other cases studied in the literature.(9) As such, it is quite clear that meaningful increases in parental choice and school autonomy tend to yield positive outcomes in terms of performance.

Yet cognitive benefits do not constitute the lion’s share of the benefits of parental choice and school autonomy. For parents, schooling is not only about scores on standardized tests for reading and mathematical abilities. They also consider the social environment in which their children will learn and whether it will be beneficial to their mental well-being. When parents exhibit strong preferences for mental health components of schooling, offering a greater space for school choice allows them to find a more balanced service. And indeed, the literature on parental choice in schooling shows a strong association with improvements in students’ mental health.

One recent study compared differences in trends of mental health outcomes before and after the introduction of school choice in some American states relative to differences in trends for states that did not introduce school choice.(10) This methodology, widely used in economic analysis, allows researchers to assign a causal weight to the effects they find.(11) Concentrating on teenagers between 15 and 19 years of age, the authors found a 10% reduction in suicide rates following the introduction of school choice.(12)

When they extended their analysis to other data, such as the percentage of children reporting mental health problems (for example, anorexia or bulimia), they found similar beneficial effects. The likelihood of suffering from emotional problems was reduced by between 1.9 and 2.9 percentage points(13)—a substantial proportion given that 3% of the population studied reported such problems.(14) This key result complements earlier but less robust studies connecting school choice to mental health.(15) According to the authors, this was due to the fact that schools became more sensitive to the topics of bullying, extra-curricular activities, and civic engagement. As a result, they adjusted their services to suit their local communities and create a more favourable school culture.

The problem of bullying is probably the best example of the importance of these benefits. Being bullied between the ages of 13 and 16 reduces educational achievements and earnings by age 25 by significant margins.(17) As school choice appears to create incentives for schools to reduce bullying, the benefits of this policy will only appear with some latency, but will nonetheless be considerable in the long run.

All sides agree that improving cognitive and non-cognitive outcomes for children is important, and that educational policy plays a significant role. However, the idea that increasing government expenditures on education will secure those improvements is misleading. The manner in which money is spent weighs more heavily than the level of spending. The bulk of the empirical literature in the economics of education suggests that policies that improve parental choice and school autonomy provide better ways to spend. The only question is how to adapt school choice and autonomy to Quebec’s particular circumstances, for the benefit of parents and students across the province.