This Economic Note was prepared by Olivier Rancourt, Economist at the MEI, and Miguel Ouellette, Director of Operations and Economist at the MEI. The MEI’s Environment Series aims to explore the economic aspects of policies designed to protect the natural world in order to encourage the most cost-effective responses to our environmental challenges.

In Quebec, and elsewhere in Canada, the forestry industry is of great importance, both economically and historically. Recent years have moreover seen a revolution in the techniques and technologies used in this sector. These innovations have generated substantial environmental and economic benefits for Quebec. The adoption of new techniques has also enabled the development of innovative production methods in other industries, which have in turn increased their productivity, all while reducing their environmental footprint.

These changes, devised and deployed by creative entrepreneurs, are a testament to the Quebec forestry industry’s constant willingness to renew itself. The importance of the role played by entrepreneurs in this process should therefore be recognized, and the government should choose its public policies and regulations carefully so as not to restrict or slow down market innovation.

How Forestry Serves the Environment

One of the great preoccupations of the 21st century concerns environmental protection and the fight against climate change. This notably involves slowing the emission of greenhouse gases and setting up carbon capture programs.(1) Planting trees is recognized as one of the best ways to capture carbon, and one that is actively employed by the forestry sector.(2)

The growth of trees, which happens thanks to photosynthesis, captures atmospheric CO2 and transforms it into organic plant matter. The best ways to maximize carbon capture are to harvest older trees and increase the productivity of the forest.(3) It is therefore important to combine these methods with the proactive management of our forest resources in order to maximize their positive environmental impact.

Currently, less than 1% of Quebec forests are harvested each year, and our forests regenerate themselves faster than they are harvested.(4) Moreover, logging is responsible for only a small share of the hectares of forest affected. In 2018, in Quebec, over 5.5 million hectares of trees were defoliated by insects, 202,000 hectares were harvested, and 86,000 hectares were burned down by forest fires(5) (see Figure 1). Ecologically, then, both the quality and the quantity of the forest harvested should be increased, in order to maximize the environmental benefits of carbon capture. Indeed, when trees are destroyed by fire or when they die and decay as a result of insect attack or just old age, they release into the atmosphere the CO2 they accumulated throughout their lives.(6) 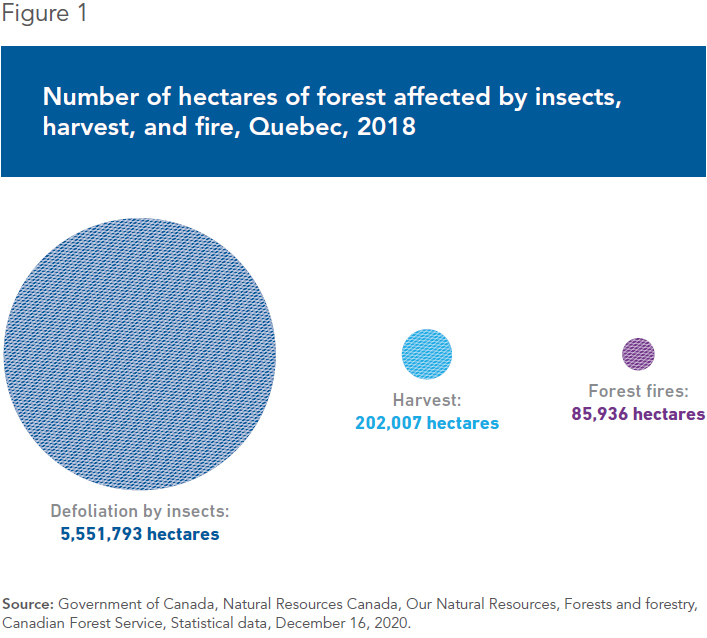 ​One of the innovations that allows for a better selection of which part of the forest to harvest and which trees to log is “light detection and ranging” or LiDAR. This 3-D imaging system measures the forest canopy, which can be used to estimate vegetation height and ground elevation.(7) In the 1990s, LiDAR data were combined with GPS data to produce a topographical mapping technology that is used by entrepreneurs in various projects.(8)

LiDAR data have been collected in Quebec by the Department of Forests, Wildlife and Parks since 2015, with the goal of having 529,000 km2 of imaging done by the end of 2021.(9) The data are accessible to the public and can be used by anyone.

Among other things, LiDAR can identify certain characteristics of trees, such as their height, their size, and their age,(10) helping in the elaboration of better logging plans and thereby ensuring the forest is sustainably managed while maximizing carbon capture.(11)

The management of sawmill residue is another example of innovation in the forestry industry that has allowed it to reduce its environmental footprint. Nowadays, instead of simply throwing residue away, it is largely reused by entrepreneurs in various processes. One of these is the use of residues for biomass, a fuel source whose combustion emits less greenhouse gas than fossil fuel, and which is therefore more ecological.(12) In 2015, Canada generated over 12,000 GWh of electricity from some 70 biomass power plants, a 54% increase compared to ten years earlier.(13)

New methods of managing sawmills also allow for a better utilization of wood. In Quebec, only 25% to 30% of the volume of hardwood from public forests can be processed in traditional sawmills, the rest being considered unusable on account of its size, its curvature, or other imperfections in the wood.(14) New production methods and techniques introduced by entrepreneurs allow this percentage to be increased, and therefore help maximize carbon capture in Quebec, all while reducing wood loss.

The innovations of forestry entrepreneurs have greatly benefited more than just the natural environment. The Quebec economy has also come out ahead. Many new technologies have surfaced in recent years, both for the harvesting of wood and for the processing of forest products, thus helping to increase the sector’s productivity.

In 2019, wood processing activities in the province generated $2 billion worth of exports, accounting for 3% of Quebec’s GDP, in addition to employing 30,000 people.(15)

In 2020, the forestry industry was one of the biggest exporters in Quebec, accounting for 8% of its total exports(16) (see Figure 2). This high level of productivity is due in part to the development and deployment of new production methods and innovative technologies by entrepreneurs in the forestry industry and related sectors. 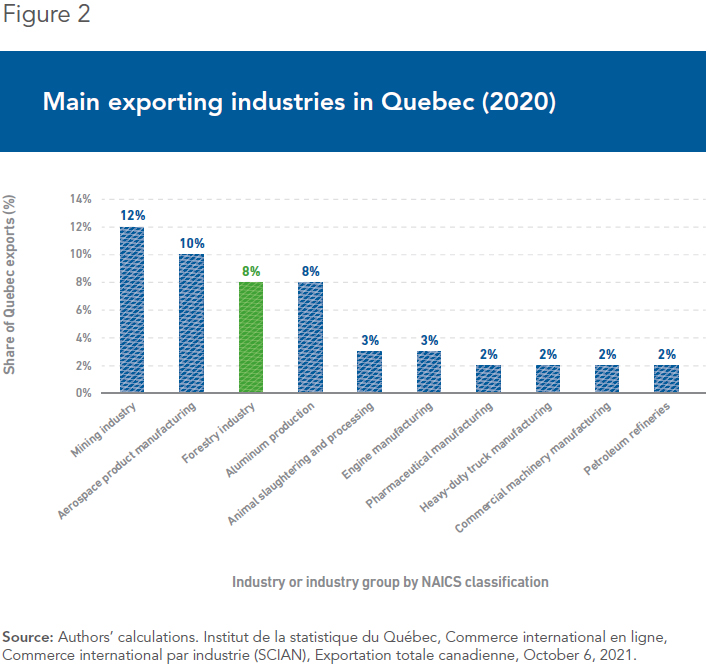 Productivity gains occur at different stages of the production cycle, from harvest to processing. An eloquent example is the use of LiDAR, which generated a return on capital invested of $1.60/m3 of wood harvested in Ontario.(17) In Quebec, the return on capital invested by companies using LiDAR was projected to be $2.13/m3, according to a 2015 report. This same report also estimated that the Quebec government could save $27.10/km2 over ten years thanks to the use of LiDAR in forestry,(18) notably due to the reduction in hours government employees would need to spend to carry out and update the inventory of resources and land, once these were mapped with LiDAR.(19) Therefore, if the goal of 529,000 km2 of imaging data by the end of 2021 is achieved, this represents savings of $1.4 million per year.(20)

In addition to the various innovations in wood harvesting, another innovation that has considerably increased the sector’s productivity, all while using fewer trees, is the use of software to optimize sawing. In Quebec, since 2014, sawmills have invested an average of $10 million to $12 million each in modernizing their equipment.(21)

Before the introduction of this software, losses of wood were as high as 20% to 25%. Now, they get the most out of every log thanks to new techniques that minimize the volume of wood lost per log, thus maximizing the productivity of each cubic metre of wood harvested.(22)

Other than this increased productivity of sawmills, certain software programs also reduce milling losses due to imperfections in the wood. After the introduction of sorting software, certain sawmills and pulp and paper mills registered gains of up to $80,000 a month thanks to the efficient classification of products and the detection of flaws in the timber.(23)

These new software programs and production technologies not only lead to reduced losses (and therefore to increased numbers of products coming out of sawmills per cubic metre of wood coming in), but also to the productive use of wood that was formerly considered unusable.(24) This wood, previously thrown out, or simply left in the forest, was a source of GHG emissions when it decayed. By using this wood, sawmills thus contribute to the fight against climate change.

In 2015, a study commissioned by the Quebec Department of Forests, Wildlife and Parks looked at the possible productivity gains during the processing of lower quality hardwood. The study concluded that the deployment of new optimization processes in sawmills could significantly reduce (by up to 36%) the quantity of wood required to produce certain types of boards.(25)

All of these innovations were introduced by entrepreneurs to increase the productivity of the forestry industry, and as a result became instrumental in the sector’s economic renewal.

The Impact on Other Industries

Other economic sectors have also benefited from the innovations of forestry entrepreneurs, notably through new methods of reusing residues and the adaptation of new technologies to their sectors.

One of the industries that has benefited the most from forestry sector innovations is agriculture. Since the 2000s, certain organic residues from forestry and pulp and paper have been processed into fertilizers for farmers.(26) Some companies transform over 90% of certain kinds of sawmill residues into agricultural fertilizers.(27)

Another option is to transform wood chips into special wood charcoal, which is used to restore contaminated soil and produce long-term beneficial effects in that soil.(28)

Heat residuals from pulp mills can also reduce greenhouses’ energy costs. Since 2016, the greenhouse complex located in Saint-Félicien, in the Lac-Saint-Jean region, has adopted this approach, with an adjacent mill providing 25% of the heat it uses. The reduction of GHGs emitted by the mill following this change is equivalent to taking over 2,000 vehicles off the road per year.(29)

Letting Entrepreneurs Do What They Do Best

Whether for the environment, the economy, or other industries, the innovations of forestry entrepreneurs are of great importance to Quebec. They contribute to environmental protection, to the fight against climate change, to prosperity in the province, and to the rising living standards of workers. To keep enjoying these widespread benefits, however, it is essential that the different levels of government allow entrepreneurs to innovate without putting obstacles in their way.