According to the authors of this Economic Note, it is time for the CRTC to re-examine its regulatory framework and to gradually dismantle its wholesale pricing regime and put its trust in entrepreneurs. Instead of another about face on wholesale pricing, the authorities should stop overregulating the sector, and transition to a framework based on real, dynamic, facilities-based competition.

This Economic Note was prepared by Valentin Petkantchin, Senior Fellow at the MEI, and Gabriel Giguère, Public Policy Analyst at the MEI. The MEI’s Regulation Series aims to examine the often unintended consequences for individuals and businesses of various laws and rules, in contrast with their stated goals.

Substantial investments are indispensable in order to meet the growing demand and quality requirements of Canadian consumers that have emerged following the lockdown policies and other restrictions to fight COVID-19. A stable wholesale pricing framework that does not penalize operators trying to innovate and invest in their own networks is of paramount importance if the Canadian population is to continue to enjoy fast and robust telecommunications networks for broadband internet.

A Substantial Increase in Demand

Since March 2020, the Canadian population has had to spend more time online, whether for work,(1) education, or entertainment.(2) The closing of offices related to COVID-19 restrictions pushed many workers to carry out their professional activities remotely.(3) Almost half of the working population started working more from home.(4) A significant proportion of students also had to pursue their studies remotely, far more than before the pandemic for the vast majority of them.(5) This dynamic of more activities becoming digital is a general reality for all Canadians. For example, whereas e-commerce took off, with 70% more sales in 2020,(6) retail sales were down for that same year,(7) a clear change in the behaviour of Canadians.

This new reality has emphasized the importance of having access to high-quality internet in order to pursue professional, educational, or personal activities. With online presence having increased, the majority of Canadians (55%) now spend five hours or more a day online.(8) To illustrate this dynamic, the average monthly volume of data downloaded per residential internet subscription increased considerably between the first quarter of 2019 and the third quarter of 2021, from 204.8 GB to 368.8 GB (+80%). As for the volume of data uploaded, it more than doubled, from 16.3 GB to 32.7 GB (+101%) over the same period(9) (see Figure 1). 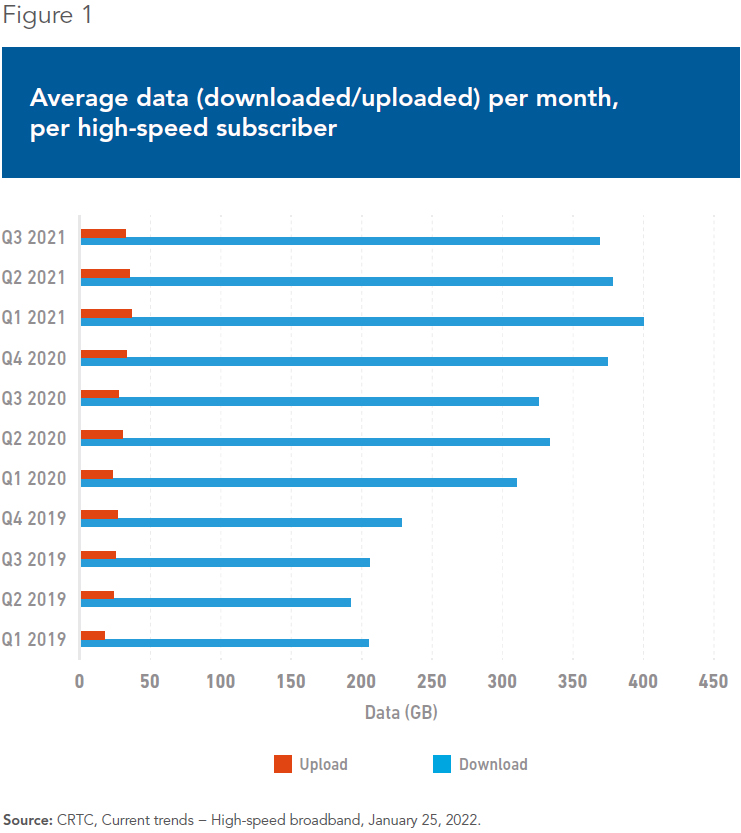 Telecommunications networks were therefore under pressure due to a strong surge in demand for services.(10) Residential internet experienced the biggest increase in usage, with substantial increases in network traffic.(11)

As a general rule, the internet has held up despite the pressure exerted by companies turning to digital.(12) However, certain service companies forced to go digital saw their client volumes fall given the quality of internet services in rural regions.(13) The unavailability of high-speed internet in some of these far-flung regions is a reality for a significant portion of clients,(14) a situation that was sometimes a problem for students who had to attend school remotely.(15) Nevertheless, the imposition of telecommuting allowed many tens of thousands of individuals to leave large urban centres like Toronto and Montreal and set themselves up in the suburbs or in rural regions.(16)

Massive Investments over the Past Decade

Despite some drawbacks, the situation would probably have been more problematic if Canada’s large telecommunications companies had not invested as much as they did in recent years. These infrastructure investments allowed Canadians’ telecommunications needs to be met during a period when those needs were higher than ever.

The performance and speed of Canadian telecommunications networks—especially in urban centres—would not have been possible without the constant upstream investments that facilities-based providers carried out over the past decade, which amounted to over $8.5 billion a year, on average, since 2013 (see Figure 2). 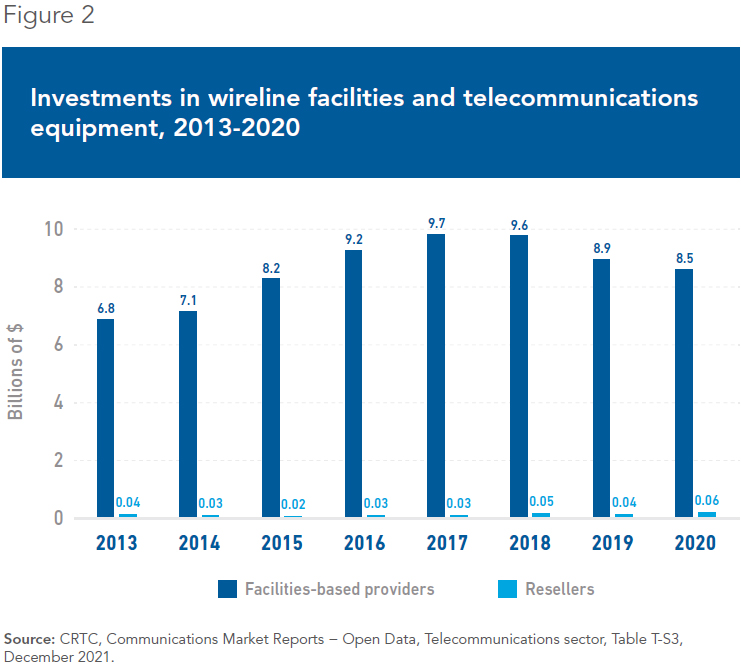 It is thanks to these investments in network construction, modernization, and maintenance that download and upload speeds can increase, while the demand for internet services intensifies. Without these investments, there would have been less development of telecommunications infrastructure, notably for broadband internet, as seen in certain rural settings.(17) The number of subscribers who enjoy a network with speeds of 50 Mbps for downloads and 10 Mbps for uploads—which corresponds to the CRTC’s target criteria—thus increased, representing 70.5% of all subscribers.(18) Conversely, the number of those without a subscription to such a network fell by more than 40%, from 5.9 million to 3.5 million subscribers (see Figure 3). Finally, over 1.3 million subscribers in the third quarter of 2021 were enjoying an ultra high-speed network, approaching 1 Gbps for downloads and 200 Mbps for uploads. 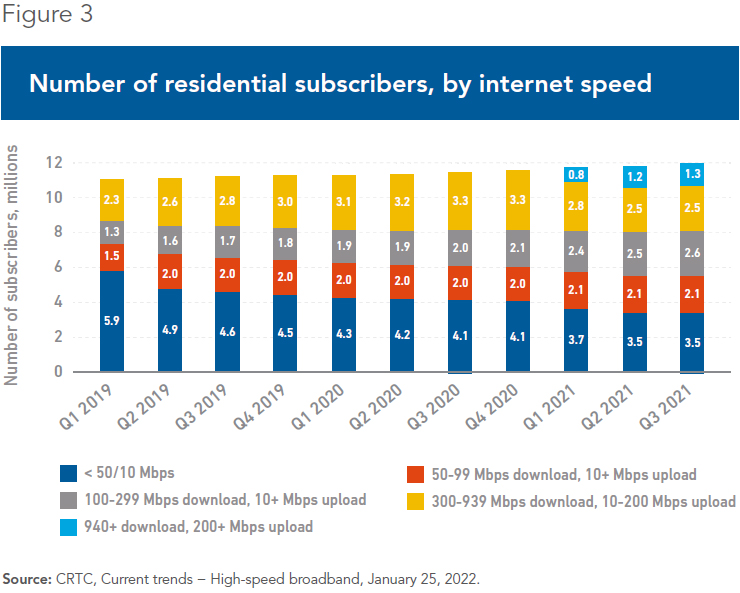 The Result of Intense Dynamic Competition among Facilities-Based Providers

The existence of a large number of sellers in a market niche is generally considered(19) a goal worth reaching, the guarantor of lower prices for consumers.

Yet this is a simplistic, static vision, whereas competition is not a static state, but rather a dynamic process.(20) The competitive process remains operational as long as there are no prohibitions or insurmountable regulatory barriers for entrepreneurs wanting to enter a sector or industry, regardless of how many producers there are(21) at any given moment.

In certain industries requiring the deployment and maintenance of expensive networks, a small number of providers, even just one, would not automatically mean that competition was nonexistent. Why? In the absence of such barriers, if ever this small number (or this sole provider)(22) does not satisfy consumers optimally, this will represent a profit opportunity for new entrepreneurs wanting to enter the market. They will not hesitate to seize it, using the same technology or entirely new technologies.

The traditional telephony sector was thus opened up to competition in the late 1990s.(23) Existing telecommunications networks are the fruit of the intense rivalry that was waged, and that still rages, between the different national facilities-based providers.(24) These in fact use different technological platforms, as traditional telephony companies and cable providers do.(25)

However, if ever the competition among these providers becomes unsatisfactory, other technologies are also available today, or will appear to take their place, such as wireless, or satellite telecommunications, or even through the electricity grid.(26)

In case of a failure of competition between current telephone and cable companies, the new technological breakthrough of tomorrow could come from there, without there being any urgent need to see a multitude of different providers, as assumed by the public authorities’ simplistic vision of competition.

Despite real, dynamic, intense facilities-based competition, the CRTC artificially promotes the entry and survival of retail resellers and of small providers that have not invested in their own networks (see Figure 2).

In the name of greater “retail competition,” these providers thus see their access to national telecom networks guaranteed by the CRTC. The agency also determines the wholesale prices at which broadband internet services can be purchased from
facilities-based providers.(27) The purpose of these wholesale rates, in the CRTC’s vision, is to favour new entrants.(28)

Yet this is price fixing, which has nothing to do with real competition. For even if such interventions could lead to the appearance of a multitude of resellers and lower prices for consumers in the short term, this would happen to the detriment of facilities-based providers and their ability to invest to improve the quality of their networks in the longer term, which would end up hurting consumers.(29)

The promotion of such “retail competition” is not sustainable, and it ends up hurting consumers, for two main reasons:

Facilities-based competitors drive the types of dynamic competition that result in better, higher quality networks for Canadians. At the same time, this form of competition requires substantial investments in physical networks, and the willingness of facilities-based competitors to make these investments can be dulled by wholesale access regulation.(30)

The mandatory sharing of whole swaths of facilities-based providers’ networks with their competitors at regulated rates made its appearance over 20 years ago with the opening up of traditional telephone networks to competition.(31) This mandatory sharing regulation had been considered indispensable to allow for the transition from a situation of legally protected monopoly to a situation of openness to competition.(32) However, the situation is no longer the same: providers compete with each other based on technologically different facilities.(33)

Today, the mandatory sharing of these facilities, notably of fibre to the home (FTTH), goes hand in hand with the regulation of the prices of wholesale data transport services using these facilities.(34)

Instead of letting entrepreneurs decide if such sharing has to happen, and if so, at what prices, the CRTC has decided to set the parameters by administrative decree. Recent history shows the danger of this kind of regulation and the regulatory uncertainty that this creates for all providers, big and small:

For purposes of illustration, the capacity rates per 100 Mbps, controlled by the CRTC, fell dramatically up until 2021, when the regulator decided to raise these prices up to 2016 levels (see the Annex). This introduced a sizable dose of regulatory uncertainty for all providers, including resellers. Despite the fact that a majority of Canadians today have high-speed internet,(43) this regulation inevitably penalizes investment. Without it, new networks could have been deployed faster and to a greater number of consumers, compared to the current situation.(44)

The CRTC rightly noted in this regard in 2021 “that there has been significant regulatory uncertainty in setting aggregated wholesale HSA [high-speed access] service rates, which has negatively influenced the business plans of both the wholesale HSA service providers and competitors.”(45)

Leave Network Sharing and Wholesale Pricing to the Market

If they want Canadian consumers to continue to have access to high-quality, reliable internet services, the authorities will have to think twice before cancelling the CRTC’s 2021 decision. Instead of another about face on wholesale pricing, they should stop overregulating the sector, and transition to a framework based on real, dynamic, facilities-based competition.

The telecom sector requires constant major investments with high economic and commercial risks. CRTC decisions aiming to dictate network sharing conditions and wholesale prices create additional uncertainty and only increase those risks. They lead to substantial wasted resources in terms of lobbying, compliance, and complaints on the part of providers—resources that are not available to be invested in providing better service to consumers.

It is time for the CRTC to re-examine its regulatory framework and to gradually dismantle its wholesale pricing regime and let these be determined by the free play of market forces. To paraphrase Nobel laureate economist Friedrich Hayek, competition is a process of discovering prices and sharing conditions, including for broadband internet services. 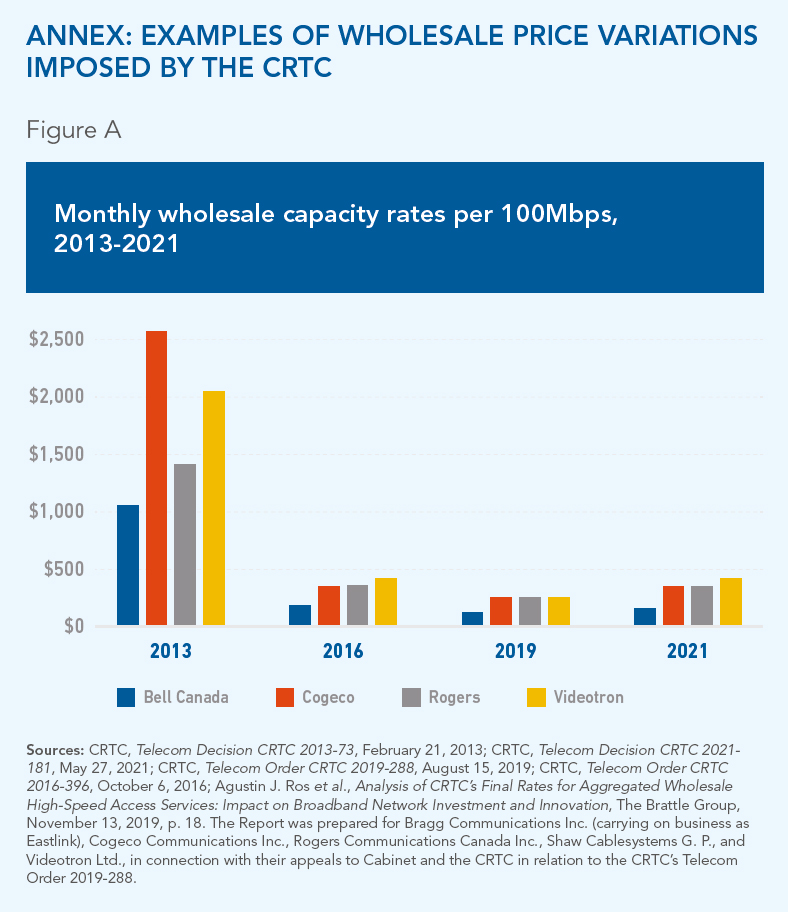