This Viewpoint was prepared by Vincent Geloso, Senior Economist at the MEI. The MEI’s Energy Series aims to examine the economic impact of the development of various energy sources and to challenge the myths and unrealistic proposals related to this important field of activity.

Few symbols of the Quebec government evoke as many feelings as Hydro-Québec. This giant, which represents nearly 4% of the Quebec economy,(2) has embedded itself in the collective imagination. It evokes Quebecers’ fight to liberate themselves from a stifling monopoly. Any suggestion of privatization in the public debate is immediately perceived as a desire to return to the past, in an era when francophones were subject to anglophone capital.

Yet the performance of the public corporation leaves much to be desired. In 2009, an in-depth MEI study compared Hydro-Québec to similar private companies in North America.(3) Its main conclusion was that the public corporation underperformed, with at least $2 billion in lost profits. In 2019, a Centre for Productivity and Prosperity study demonstrated that the overall efficiency of all its factors of production (labour, capital, equipment) had fallen by over 20% since 1981,(4) whereas practically every study looking at the overall efficiency of foreign power companies finds efficiency gains over the same period.(5)

Improvements are therefore possible for the benefit of the government and the Quebec population, including the possibility of privatizing and liberalizing the energy market in Quebec. However, whenever the topic is discussed, the debate is solely on the consequences of such a policy in the future. To properly understand this issue, however, it is also useful to look to the past.

Given that November 14, 2022 marks the 60th anniversary of the 1962 election that was fought almost exclusively over the issue of nationalization, this is a good time to re-examine the performance of the private electricity market in Quebec before that date.

The Market before Nationalization

The descriptions that exist of the electricity market before nationalization stress the idea of ultrapowerful regional monopolies that charged consumers exorbitant prices, whether in cities or in the countryside. Many historians and economists have repeated the statements of political figures who were crusading for nationalization like Philippe Hamel and Télesphore-Damien Bouchard who compared prices for residential customers in Quebec and in Ontario.(6) These comparisons aimed to justify the idea of nationalizing the industry (or at least of having municipalities take charge of certain aspects of the service).

The choice of comparison with Ontario was not innocent, however, since that province had nationalized its industry and was selling electricity well below the market price. The result of this policy in Ontario was to encourage more consumption than what the province’s producers were in a position to satisfy.(7) The most efficient sites (notably in Niagara) having already been developed, the only politically feasible option available to make up for this shortfall was to purchase electricity from Quebec producers.

Very quickly, large Quebec companies signed major agreements with Ontario’s public corporation, and exports to Ontario exploded. From less than 4% of production before 1925, these climbed to nearly 20% of total production during the 1930s.(8)

This additional tax burden was due to various taxes that Ontario had to impose in order to finance electricity imports. However, the Ontario prices reported in the sources used by historians did not include the effect of direct taxes on electricity in Ontario since the government did not tax itself. Prices in Quebec, though, include the effect of the non-negligible taxes that the Quebec government imposed on private electricity producers. In 1925, taxes represented 16.5% of the expenses of electricity companies, a percentage that rose to 20% in 1931, 24.9% in 1936, and 32.8% in 1939(10) (see Figure 1). 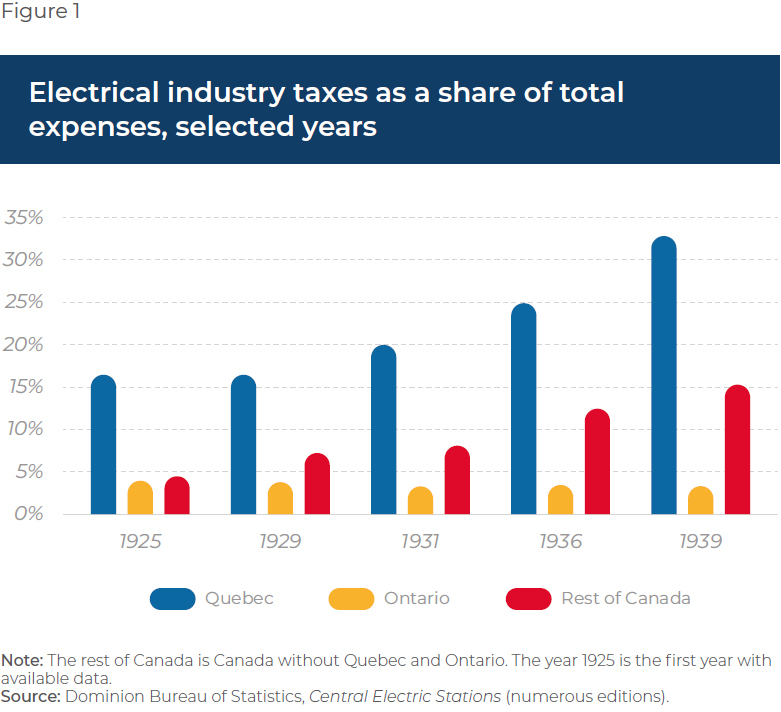 Of course, this increase in demand from Ontario for electricity produced in Quebec very likely led to an increase in prices in Quebec. When we look at those Quebec markets that were directly connected to Ontario markets (those around Montreal), we see that from 1926 to 1941, prices rose between 12.9% and 20.8% compared to those Quebec markets that were not directly connected (those in the eastern part of the province).(11) Ontario’s nationalization forced Quebecers to pay more for their electricity. It also sowed the seeds of nationalization in Quebec.

The comparisons generally used to illustrate the situation before nationalization thus unduly favour Ontario and lead to the false conclusion that the private market was not delivering good results.

Yet when this poor comparison with Ontario is set aside, in favour of a North American perspective, it becomes clear that prices in Quebec were very low. When compared with 62 North American cities, Montreal had the 5th lowest prices for residential services in 1923-1925.(12) In 1938, the average provincial price was in 6th place compared to North American cities. Moreover, it must be noted that industrial customers—even without taking into account the effect of additional taxes in Ontario—paid less for their electricity.(13) This is an important point since these low prices contributed to competitive production costs in the manufacturing sector, thus encouraging its expansion.

These facts can also be observed in consumption per person. Of course, a smaller proportion of households were connected to an electricity service in Quebec than in Ontario. However, the fact that Quebecers were poorer than Ontarians needs to be taken into account. This relative poverty explains a good portion of the consumption gap. It is thus more appropriate to compare Quebec with Canada as a whole.

This comparison shows that the connection rate was 98.5% of the rate for the entire country, even though the average income in Quebec was 79.9% of the Canadian average.(14) Such a level of consumption despite the general poverty of Quebecers at the time suggests that the industry must have been able to offer particularly low prices, and that it is the data from Ontario that is the outlier.

The regulation and nationalization of electricity was a hot topic during the 1936 election campaign. When we analyze the results, we see that the Liberal Party (which was associated with the electricity companies) suffered bigger losses in those ridings which were connected with the Ontario markets.(15) In these ridings, nearly a third of the reduction in votes for the Liberal Party is explained by the proximity of Ontario.

Not only is it clear that the situation before nationalization was far better than that depicted in the popular debate and in the dominant historiography, but it is also clear that the problems raised by the defenders of nationalization are attributed to the wrong causes. It is not the poor performance of private firms that explains the push for nationalization. Strangely, the process of nationalizing Quebec electricity companies, which began in 1944, was justified on the basis of the unintended consequences of Ontario’s nationalization two decades earlier.

This finer understanding of history does not tell us how to proceed in the future. However, it does show us the factual errors that obscure our conception of good and bad avenues to pursue. If we want to discuss the future of Hydro-Québec, the scarecrow of a misunderstood past should be discarded.