This Economic Note was prepared by James Dean and Vincent Geloso, both Associate Researchers with the MEI and respectively PhD candidate in economics at West Virginia University and assistant professor of economics at George Mason University. The MEI’s Regulation Series aims to examine the often unintended consequences for individuals and businesses of various laws and rules, in contrast with their stated goals.

Concerns about income inequality are often tied to concerns regarding income mobility—the possibility of increasing (or decreasing) one’s income over time. This connection is simple enough: high inequality means the poor are more constrained in their ability to make decisions that would improve their living standards. In other words, they have fewer choices. As such, numerous commentators and academics have argued that the odds of achieving upward income mobility diminished over the second half of the 20th century, and that this was due to income inequality.(1)

To be sure, there are signs that income mobility has been diminishing over time across Western societies.(2) Statistics Canada, for instance, has continuous estimates of income mobility in this country since 1982,(3) and these show falling income mobility.(4)

Yet inequality is not the only determinant of whether those at the bottom of the income distribution can experience rising incomes, or how quickly their incomes can rise. Other important factors include the nature of economic institutions and how much economic freedom the poor enjoy.(5) These are crucially important, yet rarely mentioned in public discussions of income mobility.

Economic freedom—the freedom of individuals to work, produce, consume, and invest as they please—affects income mobility by determining to what extent efforts are worthwhile. When workers decide to invest in acquiring new skills or in new businesses, they do so for the potential rewards of such investment. Those rewards can be altered by government, which can make the fruits of their labour either smaller or more difficult to attain. Essentially, this boils down to how easily and reliably people can enjoy the products of their efforts.

This is why the empirical literature on income mobility and economic freedom suggests that property rights—one of the most crucial ingredients of economic freedom as they involve the security of one’s property—are strongly and positively correlated with income mobility.(6) The posited reason for this effect is that the poor feel that their efforts are worthwhile when they can securely enjoy the fruits of their labour without risks of expropriation.

There are other ingredients of economic freedom that matter to income mobility. For instance, occupational licensing restricts entry into certain professions, thus reducing workers’ economic freedom. These barriers take the form of high fees for qualifications, long qualification periods, and restrictions on the types of tasks that can be carried out. Studies in the United States suggest that such occupational regulations tend to raise costs in lower-income professions (construction workers, cosmeticians, technicians) relatively more than in higher-income professions, such that the burden weighs more heavily on those closer to the bottom of the income distribution, and acts as a drag on their efforts to improve their lot.(7) Evidence specific to the effects of occupational licensing on the incomes of the poor in Canada suggests that the same applies in this country.(8)

Another example is product regulations, which reduce consumers’ economic freedom. There is good evidence that these disproportionately affect goods that feature heavily in the expenditures of poorer households. Thus, those regulations disproportionately increase the cost of living for the poor, again impeding their efforts to raise their standard of living.(9)

To be sure, some government interventions can yield positive effects. For example, fiscal transfers to poor households could allow them to make investment decisions, such as pursuing technical or college degrees, for instance, that would have otherwise been difficult or impossible.(10) However, the net effect is ambiguous as these fiscal transfers require taxation. Depending on the form of taxation, the higher tax rates might reduce the incentive to make the effort.(11)

Statistics Canada produces a rich database of income mobility over rolling five-year windows using tax records.(14) Essentially, the same individuals are tracked during a five-year period to see how much their incomes increased. One group of people is tracked from 1982 to 1987, another from 1983 to 1988, and so on, until the 2013-2018 window.(15)

There are three key measures of income mobility that can be used: i) the per capita dollar mobility measure, defined as the average change in income between the first and last year of the period; ii) the proportion of individuals who experience rising incomes; and iii) the per capita decile mobility measure, defined as the average change of decile (slices of 10% of the population), including both upward and downward shifts among all Canadians (and not just the people sampled).(16) The latter measure is the most important as it concerns shifts within the income distribution in Canada (i.e., mobility relative to all Canadians). Most importantly, all these income mobility figures can be measured both for the entire group and by the initial economic position of individuals (i.e., the poorest 10% versus everybody else).

As the data can be broken down at the provincial level, we connected it with the Economic Freedom for North America (EFNA) report produced by the Fraser Institute. The EFNA, measured on a scale from 0 to 10 (worst to best), has three components measuring economic freedom: i) government spending; ii) taxation; and iii) labour market regulations.(17) With the addition of a number of relevant economic control variables to keep all else equal, we tested whether the EFNA predicts greater mobility and which of the three components have a strong effect.

Using a panel regression approach,(18) the results are reported for both the entire population and the poorest 10%. For the sake of brevity, we focus here on the most relevant results: those that pertain to the poorest 10%. This is because our preoccupation with mobility concerns their chances of moving up. Income mobility for the richest is of a lesser concern here. 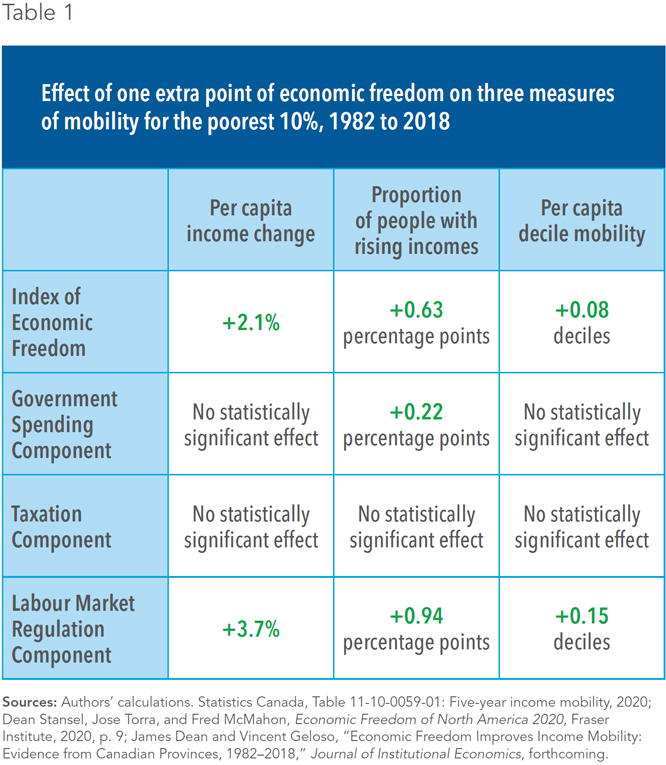 Table 1 shows our results for the bottom decile.(19) An extra point of economic freedom on the EFNA’s 10-point scale raises the incomes of the poor by 2.1%. The effect is largely driven by the labour market component, where one extra point raises their incomes by 3.7%.(20) The effects of taxation and government spending, which are very small in comparison (and actually statistically insignificant), appear to cancel each other out.

A similar pattern is observed with the proportion of people with rising incomes and with the per capita decile mobility. The results in the latter case are particularly telling, as a 1-point increase in economic freedom means that the poorest would enjoy a 0.08-decile jump up the income ladder, so their incomes rise more quickly.(21) That result is also entirely driven by regulations affecting labour markets, where one extra point of economic freedom leads to a jump of 0.15 deciles up the income ladder.

A useful way to put these results into perspective is to consider the 4.67-point gap between the province with the lowest level of economic freedom (Quebec) and the one with the highest level (Alberta) in 2013-2018, and its effect on decile mobility.(22) That gap entails that the poorest Albertans enjoy a 0.37-decile jump up the income ladder compared to the poorest Quebecers. This effect of economic freedom on decile mobility can also be observed through time. Figure 1 shows Quebec’s actual per capita decile mobility (the blue line). As can be seen from the trend line, Quebec experienced a decline in income mobility over the period. However, if Quebec were as economically free as Alberta, not only would the level of mobility be greater, but the trend line shows that mobility would have increased since 1982. 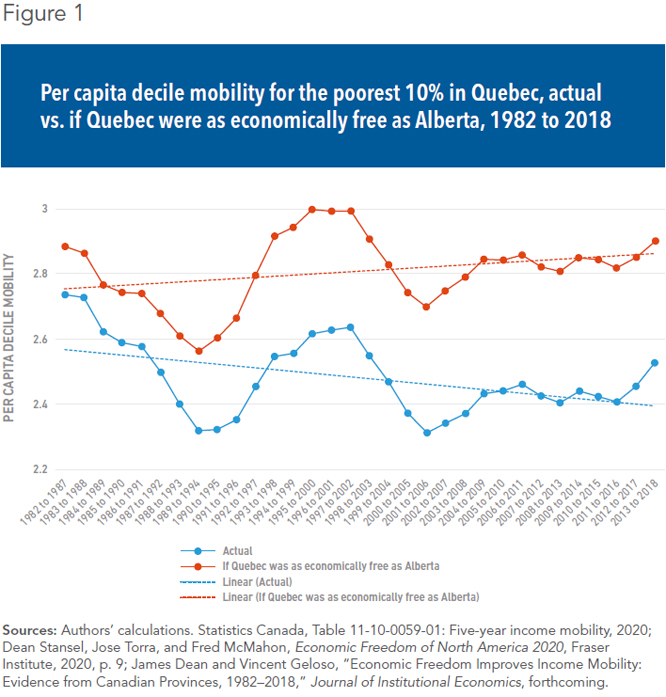 Economist Finis Welch has pointed out that “inequality is destructive whenever the low-wage citizenry views society as unfair, when it views effort as not worthwhile, when upward mobility is viewed as impossible or as so unlikely that its pursuit is not worthwhile.”(24) Economic freedom, by offering a better chance at upward mobility, therefore minimizes the societal importance of inequality.

There are important policy prescriptions that follow from our results. The main one is that reforms to make it easier for the poorest to acquire skills or secure a job (for instance, by reducing hiring costs due to regulation) are likely to substantially improve upward mobility. Such reforms are also a low-hanging fruit, requiring no government outlays. For example, occupational licensing—a particularly regressive form of labour market regulation(25)—applies to roughly 11% of all paid workers in Canada (a proportion that has been rising in recent years), with Quebec being the most aggressive province in terms of regulating industry entry.(26) Curtailing such barriers to entry would greatly improve mobility.

Those Canadian provinces that enjoy high levels of income mobility, such as Alberta, do so in large part because they remove hurdles that make it harder for society’s poorest members to help themselves. Even small increases in economic freedom can substantially improve mobility, and in so doing, give the poor a fairer shot at living a better life.