Economic Note describing the problems stemming from government monopoly over the insurance and delivery of certain care, an anomaly in the industrialized world

This Economic Note was prepared by Peter St. Onge, Senior Economist at the MEI, with the collaboration of Patrick Déry, Senior Associate Analyst at the MEI. The MEI’s Health Policy Series aims to examine the extent to which freedom of choice and private initiative lead to improvements in the quality and efficiency of health care services for all patients.

In the upcoming US election, at least ten Democratic presidential candidates are on record endorsing a consciously Canadian-style “Medicare for All” plan.(1) Most would replicate universal public funding of health care, while some would even ban private insurance for all medically necessary care, as is the case in Canada. These plans are sold as thrifty without compromising on quality and waiting times.(2) The one million Canadians languishing on a medical wait list may disagree.​

It is certainly true that Americans have good reasons to question the performance of their health care system. Despite spending about 50% more as a percentage of GDP than other developed countries,(3) according to international comparisons from the respected Commonwealth Fund (CWF), Americans get care that “ranks last in terms of Access, Equity and Health Care Outcomes, and next to last in Administrative Efficiency.”(4)

But with Canadian health care tempting our southern neighbours, it’s a good time to ask if Canada itself, which also ranks poorly in these international comparisons, is using the right model. After all, there are numerous universal systems across the developed world, from Europe to Japan. Most of them have avoided Canada’s epic wait-times, outdated equipment, and shortages of staff and facilities that have led to “hallway medicine.” These more successful systems’ main difference with Canada is simply that they allow the private sector to pitch in.(5)

For example, the CWF surveyed what percent of elective surgery patients had waited four months or longer in the past two years. US wait times were much better than Canada’s, with only 3% of American patients having waited four months, compared to 18% here. But the universal systems that do maintain a strong role for private insurance actually put in US-style numbers: In Switzerland, only 6% had waited four months or longer, in the Netherlands just 4%, and in Germany 0%.(6) These numbers suggest that it is possible to eliminate waiting times while maintaining universal coverage.

Despite decades of fierce public debate and escalating budgets, Canadian wait times actually continue to get worse. In 2019, the average wait time for medically necessary treatment was 10.1 weeks between referral from a general practitioner and getting a consultation with a specialist, over two and a half times longer (173%) than in 1993. At that point, patients still have to wait again between seeing the specialist and the actual treatment, another 10.8 weeks on average, or twice as long (92%) as in 1993.

From referral to treatment, then, it takes an average of 20.9 weeks (see Figure 1), in addition to the original wait to see the family doctor in the first place—this for “medically necessary” treatment. In less populated areas, wait times can stretch dramatically longer. In Prince Edward Island, for example, patients have to wait an average of six and a half months just to see a specialist, then another four and a half months for the actual treatment—49.3 weeks on average, again, for “medically necessary” treatment.(7) 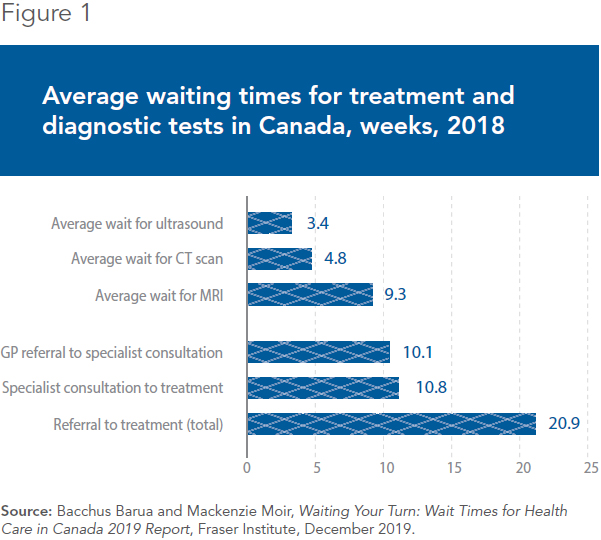 As a result, by one estimate, at any given moment, over one million Canadians—3% of the entire population—are waiting for a medical treatment. These waiting lists can average six months, and often much longer in areas that tend to suffer from staff shortages such that many cannot even find a family doctor.(8) The shortages ripple through the system; one doctor in Ontario called in a referral to the local hospital, only to be told there was a four-and-a-half year wait to see a neurologist.(9) One 16-year-old boy in British Columbia waited three years for an “urgent” surgery, during which time his condition deteriorated so much that he became a paraplegic.(10) In Montreal, a man was called for a surgery for a severe heart problem three months after he had died. The recommended medical delay for the surgery had been two to three months; it took nine months for the hospital just to make the phone call.(11)

These tragic cases are, unfortunately, not isolated. A survey of specialists found that average waiting times exceed what is clinically “reasonable” in 77% of cases. The situation continues to worsen year by year: In 1994, the average gap between clinically reasonable delay and actual delay was only four days, but by 2019 had grown to 25 days. The worst gap was in orthopedic surgery, where some 150,000 Canadians per year suffered for eleven weeks longer than even what specialists feel is clinically reasonable. Neurosurgery wait times were a month longer than specialists felt was reasonable, cataract surgeries nearly two months longer, hip and knee replacements three months longer, and so on.(12)

With one million waiting, many Canadians turn in desperation to US health care and to other countries, where Canadians can get very high-quality care without waiting if they are prepared to pay. In 2017 alone, Canadians made 217,500 trips abroad for health care, paying out-of-pocket to skip the waiting.(13) These trips included 9,500 general surgeries, 6,400 urology treatments, and 5,000 diagnostic tests including colonoscopies and angiographies of the veins.(14) These desperate patients spent $1.9 million per day to get more rapid care, up 54% in just the past four years.(15) As one Albertan put it, even paying $25,000 out-of-pocket is worth it for an entire year of living without pain thanks to a more timely hip replacement.(16)

Proponents of the Canadian system note that the proportion of privately funded medical care in Canada is already higher at 30% than in many other developed countries, although still lower than in the US where private health insurance and out-of-pocket cost make up 51% of health spending.(17) In reality, this 30% of private spending in Canada essentially represents spending outside of hospitals and physician offices, so it includes most nursing care, dental and vision, much of psychology, physiotherapy, and other paramedical care. It has also been pretty stable for over twenty years (see Figure 2). And, in these areas, Canadians are not subjected to the waiting lists endemic to the medical services covered by the public sector. This public sector monopoly on both funding and delivery of hospital services is a uniquely Canadian phenomenon. In other rich countries, universal health care systems maintain a role for private delivery, which results in better access for patients. 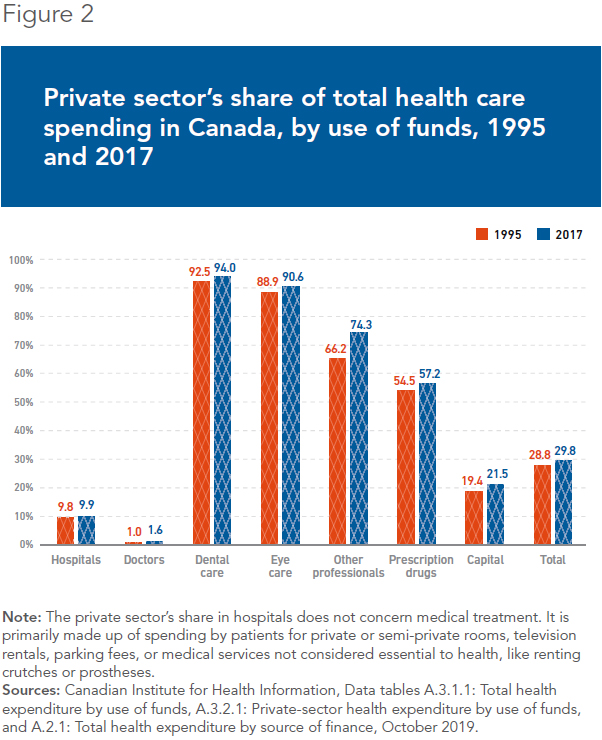 Beyond rationing care using waiting lists, Canada’s monopoly health care also underinvests in equipment and staff. Canada has 35% fewer acute care beds than the US,(18) and one-fourth as many MRIs per capita—indeed, it has fewer MRIs per capita than Turkey, Chile, or Latvia.(19) As a result, Canadian MRI waits average over 9 weeks, adding months of diagnostic delays on top of the months of treatment delays. Even routine diagnostic exams like ultrasounds have almost four-week waiting lists.(20)

In some provinces, the waits are much longer: In P.E.I., people wait over four months for an MRI, while in Nova Scotia, patients wait ten weeks for a simple ultrasound.(21) Canada skimps on equipment even compared to other universal systems: Canada has one-third fewer CT scanners, PET scanners, and MRI units, half as many angiography units, and eight times fewer lithotriptors than the average OECD country.(22)

Some treatments are simply unavailable to Canadians. When it comes to new pharmaceuticals, for example, Canada’s policy of forcing down prices has led to years-long delays for Canadian patients. On top of an additional 630-day wait compared to the United States and Europe before the arrival of new drugs on the market, Canadians must wait for these to be actually listed on their drug insurance plan. The average delay for listing is three times longer for provincial public plans (473 days) than for private plans (152 days). The latter also cover a larger proportion of new drugs.(23)

Canada also underinvests in medical staff and doctors, ranking 29th out of 33 high-income countries for doctors per 1,000 population.(24) Although Canada and the US both have far fewer physicians overall than other countries, Canada has only half as many specialists per capita as the US, likely contributing to the long wait times for specialty treatment.(25)

Between shortages and waiting lists, Canadian emergency rooms are packed. According to the CWF, Canadians aged 65 and older were 65% more likely to have visited the ER four or more times in the past year than American seniors.(26) Some 29% of Canadian adults also reported wait times of over four hours, nearly three times the US level (11%).(27) In Quebec, a majority of ER visits were actually over four hours.(28) Many Canadian ER visitors end up leaving without ever being treated, giving up on a medical system that’s perennially “free” but out of stock at the moment.

One recent trend in Canada is for medical providers to initiate “One issue per visit” rules that force patients to make multiple appointments, not only inconveniencing them but extending waits yet again as patients work through their medical issues appointment by appointment, each with its own waiting list.(29) As one doctor who follows such a practice recognized, such tactics raise “a big ethical question about rationing health care in a public system” and whether patients are denied treatment as a result.

In sum, the public monopoly in Canada achieves cost savings by rationing care with waiting lists; skimping on equipment, facilities, and drugs; and underinvesting in medical staff to the point of nationwide shortages. It is Canadian patients who pay the price.

It’s well past time to move beyond the false choice between universality and a US system. Relatively successful European systems show that shorter wait times and relief from medical shortages are feasible in a universal care model. But getting there does require allowing the private sector to lend a helping hand.