A climate of censorship seems to be taking hold on our university campuses, within our cultural institutions, and even among the general public. This new puritanism hurts the economy and makes Quebecers poorer. Indeed, this publication shows that we would be richer if we had even more freedom of expression.

In recent years, there has been a significant trend toward censorship in universities, but also among the general population. A single worldview is promoted, and attempts are made, sometimes even using coercion,(1) to silence individuals who see things differently. This is the case in many American universities, where professors and researchers have the impression that they are constantly walking on eggshells and are harassed by many students. Unfortunately, this trend seems to be gaining ground in Canada, as we saw at the University of Ottawa in recent months,(2) and does not just affect academia, but also the media and a certain more radical segment of the general population.

In a market economy like ours, freedom of expression, or free speech, has been one of the pillars of the wealth we have accumulated over time, and of our current level of well-being. Indeed, it is the opposition of ideas and the diversity of tastes that have encouraged companies to innovate and to constantly look for ways to respond to the different needs and preferences expressed in the market. By suppressing the incentive to improve and stand out from the pack, censorship and threats to freedom of expression therefore also have harmful economic consequences.​

Freedom of Expression and Economic Growth

Many fans of subjectively and strictly limiting freedom of expression think that hate speech is so costly for society that it justifies intervention from our governments and university administrators. While society should aim to reduce the prevalence of such speech, this argument misses the mark by focusing solely on one aspect, without considering the collateral economic harm associated with limits to free speech that slow and discourage innovation.(3)

Although it is true that hate speech toward individuals or groups is never the kind of speech that favours innovation, limiting it could nonetheless generate costs for society that are much higher than the gains from enjoying more homogenous speech devoid of disparaging remarks.

If limits were imposed and the penalties for “bad” speech were high enough—for example, being fired or having to pay a fine—the simple fear of being unintentionally controversial could reduce the probability of engaging in debate or conversation. This self-censorship would not be without consequences.

On this, the economic and general scientific literature is clear: The exchange of ideas stimulates innovation, and innovation is one of the main engines of economic growth and rising living standards. This is just what researchers and economists from Stanford University,(4) from Dartmouth College,(5) and from the University of California, Berkeley(6) have expressed in academic papers.

Clearly, freedom of expression is not the only variable explaining the level of wealth of a country’s population, and it is important to try to isolate the effect of free speech using an economic model in order to draw more rigorous conclusions—which we have done in the section that follows. 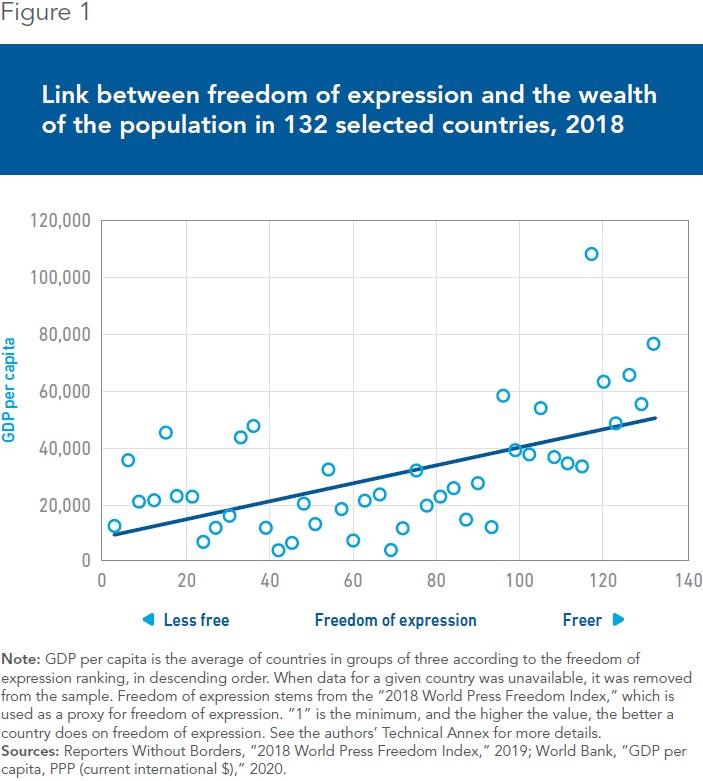 However, whether we look at wealth per capita, longevity, educational level, or infant mortality, it is generally the freer countries, both economically and in terms of freedom of expression, that shine out. It is empirically clear that encouraging the exchange of ideas promotes innovation and thus higher living standards.

Moreover, freedom of expression must also include and favour freedom of the press and the freedom to debate on university campuses, as well as the right to challenge the orientations of our governments.

Otherwise, if we assume that one part of the population has the absolute truth, which would still not justify censoring the exchange of ideas, what was the use of having transformed our educational system, which used to favour indoctrination (often religious), for a more liberal system in terms of teachings? A step in the direction of a return to dogma runs counter to modern society’s progressive values.

Favouring the exchange of ideas and the protection of free speech is intuitively beneficial, and more qualitative academic research confirms it. But concretely, for the average Canadian, what would be gained economically if our governments implemented public policies in line with the conclusions of the scientific literature in this regard?

To answer this question, we put together a sample of 132 countries by extracting different variables related to the wealth of inhabitants, demographics, health, education, and of course freedom of expression. Then, using an econometric model, we isolated the effect of freedom of expression on the wealth of Canadians (see our Technical Annex). The idea was to confirm the conclusions of qualitative studies and fundamental principles, while estimating the monetary gain per Canadian associated with improving our performance when it comes to freedom of expression.

In our sample, Canada is among the top 15% of countries in terms of freedom of expression. While it is true that we live in a relatively free society, taking this good ranking for granted would be a mistake. Indeed, our calculations show that it would be beneficial for Canada and Canadians to improve our ranking.

As illustrated in Table 1, if Canada adopted public policies more favourable to freedom of speech, and it succeeded in taking first place from Norway, individual Canadians would be an average of C$2,522 richer each year.(8) More precisely, for each step up in the ranking, every Canadian would be around $150 richer per year on average. 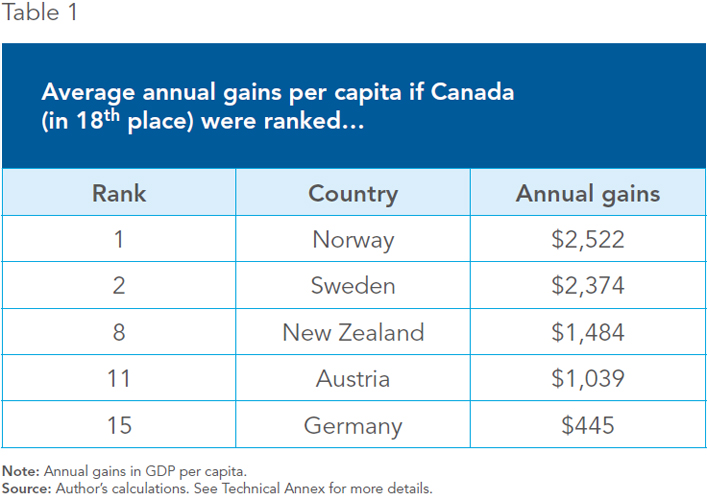 As economic theory and empirical evidence show, favouring freedom of expression stimulates, among other things, innovation, entrepreneurship, and research efficiency, and encourages our policy-makers to do a better job of managing public finances. It is all of these consequences taken together than explain the resultant annual per capita gains that can be seen in the table. Obviously, these are not cheques that are sent in the mail at the end of the year, but rather a gradual increase in our living standards propelled by the effects stemming from greater freedom of expression.

Of course, launching campaigns of censorship, as certain lobby groups and politicians want, would have the opposite effect, making Canadians poorer. Even if the intention behind the desire to banish hate speech or inflammatory ideas can sometimes be laudable, the unintended economic and social consequences are all too real.

Since freedom of expression is not an indicator that is as easy to measure as the unemployment rate, say, the ranking of the selected countries was built according to, among other things, level of pluralism, media independence, social environment and self-censorship, legal framework, transparency, information infrastructure quality, and the presence of violence.(9)

These conditions, which determine a given country’s degree of freedom of expression, allow us to then formulate concrete public policy proposals in order to make Canada more competitive in this regard and to enjoy the attendant economic benefits.

It is not surprising to observe this causal link between freedom of expression and the wealth of a country’s population. The countries around the world where people suffer under repressive, authoritarian regimes are also those that are generally poorer, even though freedom of expression is just one factor among others. However, in the West, it is harder to tell the difference between countries when it comes to free speech, since the vast majority of them are, like Canada, relatively free.

Nonetheless, by digging further, it becomes clear that there are striking differences between Western countries. For example, in Norway, it is standard practice for politicians to make constant efforts, encouraged by citizens, to better protect freedom of expression, both nationally and globally. In fact, a few years ago, this country armed itself with a national and an international action plan to promote media independence, reduce already-low limits to the exchange of ideas, and increase government transparency.(10)

In Canada, and especially in certain provinces like Quebec, the government can arbitrarily decide to subsidize one media outlet rather than another, which can potentially hinder media independence and therefore lead to biased and less reliable information. Moreover, the exchange of ideas is sometimes discouraged by certain student associations on school campuses.(11) Not to mention that it is increasingly difficult to obtain information from our governments through requests for access to information.(12) These examples illustrate a part of the difference that exists between Norway and our country, and that should be reduced or even eliminated, to the benefit of Canadians.

To make this happen, we propose among other things that our provincial and federal governments collaborate in order to equip themselves with a plan to promote freedom of expression that would:

With the rise of a movement promoting a single worldview and encouraging censorship measures, our governments must not give in to the pressure. The demands of these groups are economically harmful, and the well-being that stems from living in a relatively free country like Canada must not be compromised. The lesson to be drawn from the scientific literature and the calculations presented in this publication is that we need to do more to protect the freedom of expression of Canadians.