This Viewpoint was prepared by Kevin Brookes, Associate Researcher at the MEI, and Patrick Déry, Senior Public Policy Analyst at the MEI.

The latest reports on freedom of the press are worrisome. This freedom has declined over the past decade, and 54 journalists were killed on the job in 2018 alone.(1) Several factors explain the level of press freedom of a given country: the nature of the political system, its level of development, or the presence of armed conflicts on its territory, for example.(2) Another important factor, too often ignored, is its degree of economic freedom.

Economic freedom implies that people can choose among goods and services and engage in voluntary exchange.(3) The free market, by guaranteeing the separation of economic and political powers, notably ensures freedom of expression: It allows for competition between various buyers and sellers of information and ideas.(4)

Several aspects of economic freedom tend to provide journalists with conditions that allow them to express themselves freely. There is, for example, the freedom to start your own business, and thus to compete with other media sources. The government or certain well-connected interest groups are thus kept from taking control of the press. Openness to international trade also tends to limit the control of a limited group on public opinion in a country.(5)

The comparison between the data from two annual rankings, namely the Economic Freedom of the World and Freedom of the Press indices,(6) shows that greater economic freedom generally goes hand in hand with a higher level of press freedom.(7)

Figure 1 shows, for example, that in 2016, the countries with the most economic freedom (the top quartile) had an average press freedom score nearly twice as high as the least economically free countries (68 vs. 37). In other words, the more that countries adopt public policies leaving the market free to operate, the more the press is likely to be independent. 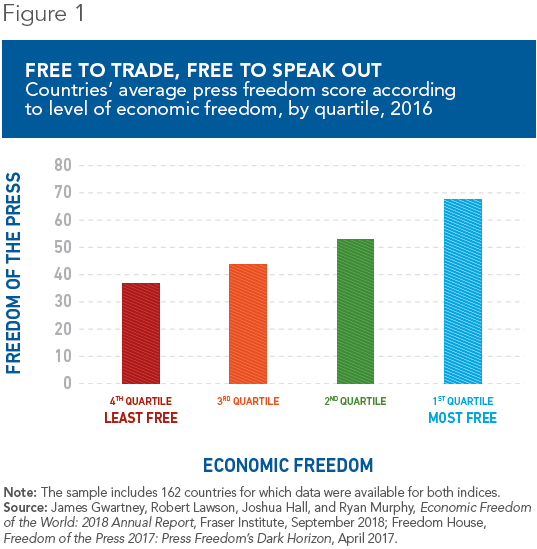 What the Best Have in Common

In which countries do we find the most press freedom? Among the top 20, most are European countries: Norway, the Netherlands, and Sweden make the podium,(8) while Canada is in 13th place.(9) The common feature of all of these countries, with a single exception,(10) is that they guarantee a high degree of economic freedom. If we look at the bigger picture, 86% of the countries with a press considered “free” in the Freedom of the Press report are in the first or second quartile in terms of economic freedom, as measured by the Economic Freedom of the World report.

Of course, economic freedom does not constitute by itself a sufficient condition for ensuring press freedom. Certain economically free countries lack a free press, like Singapore or Bahrain, for instance. Overall, the fact remains that greater economic freedom is generally associated with greater press freedom.

Some countries in South America like Bolivia, Venezuela, or Argentina, which have adopted interventionist economic policies, have endangered the independence of the press in those countries, sometimes even knowingly and through direct interventions. At the same time, certain African countries that have liberalized their economies have seen, little by little, an increase in press freedom.

Finally, besides their effect on press freedom, public policies that favour economic freedom also have a positive impact on growth, human well-being, and the condition of women.(13)​

Because it guarantees the separation of economic and political powers, economic freedom is one of the ingredients of press freedom. And while it is not sufficient by itself to ensure press freedom, economic freedom remains a necessary condition for a market of ideas to prosper in which everyone has freedom of expression, itself a prerequisite for the exercise of numerous other rights and freedoms.

International institutions and non-governmental organizations that deploy immense efforts and resources in this regard should take note of this. So, too, should industrialized countries, whose populations have benefited enormously from the liberalization of markets, yet where its benefits, widely demonstrated, are often called into question.

1. Committee to Protect Journalists, Data and Research, Killed in 2018.
2. Sebastian Stier, “Democracy, autocracy, and the news: the impact of regime type on media freedom,” Democratization, Vol. 22, No 7, 2015, pp. 1273-95.
3. James Gwartney and Robert Lawson, “The Concept and Measurement of Economic Freedom,” European Journal of Political Economy, Vol. 19, No. 3, September 2003, pp. 406-407.
4. Milton Friedman, Capitalism and Freedom, Chapter 1 – The Relation Between Economic Freedom and Political Freedom, University of Chicago Press, 1962.
5. Christian Bjørnskov, “The Hayek–Friedman hypothesis on the Press,” Journal of Institutional Economics, Vol. 14, No. 4, pp. 617-638; Simeon Djankov et al., “Who Owns the Media?” The Journal of Law and Economics, Vol. 46, No. 2, October 2003, pp. 341-382.
6. James Gwartney, Robert Lawson, Joshua Hall, and Ryan Murphy, Economic Freedom of the World: 2018 Annual Report, Fraser Institute, September 2018; Freedom House, Freedom of the Press 2017: Press Freedom’s Dark Horizon, April 2017.
7. The Fraser Institute’s economic freedom index takes into account the size of government, the legal system and property rights, the soundness of the currency, the freedom to trade internationally, and regulation. The press freedom index takes into account the political, economic, and legal contexts that influence the work of journalists.
8. See the full ranking on the MEI’s website.
9. Canada is in 13th place in our ranking of 162 countries for which data are available for both indices.
10. The exception is Barbados, an island with a population of around 300,000.
11. See the full ranking on the MEI’s website.
12. Ibid.
13. Marie-Josée Loiselle and Pascale Déry, “Economic Freedom and the Well-Being of Women around the World,” Viewpoint, MEI, March 4, 2016; Yanick Labrie and Bradley Doucet, “Economic Freedom Improves Human Well-Being,” Economic Note, MEI, February 12, 2015; Ariel R. Belasen and Roger W. Hafer, “Do Changes in Economic Freedom Affect Well-Being?” Journal of Regional Analysis & Policy, Vol. 43, No. 1, 2013, pp. 56-63; Niclas Berggren, “The Benefits of Economic Freedom: A Survey,” Independent Review, Vol. 8, No. 2, Fall 2003, pp. 193-211.