The collection of income tax involves substantial administrative costs, especially in Quebec, which is the only province that requires a separate tax return. In 2011, these costs amounted to $627 million for Revenue Quebec and $4.6 billion for the Canada Revenue Agency. To simplify procedures, some propose that the government pre-fill tax returns instead of taxpayers, a system that is in place in several industrialized countries.

Media release: The government should not fill out your tax return for you

This Economic Note was prepared by Kevin Brookes, Public Policy Analyst at the MEI, in collaboration with Pascale Déry, Vice President, Communications and Development at the MEI. The MEI’s Taxation Series aims to shine a light on the fiscal policies of governments and to study their effect on economic growth and the standard of living of citizens.

The collection of income tax involves substantial administrative costs, especially in Quebec, which is the only province that requires a separate tax return. In 2011, these costs amounted to $627 million for Revenue Quebec and $4.6 billion for the Canada Revenue Agency.(1)

To simplify procedures, some propose that the government pre-fill tax returns instead of taxpayers,(2) a system that is in place in several industrialized countries. Insofar as filling out one’s tax return is a complex, thankless task for many people, the goal is to make the experience less costly and less of a hassle. But we should also expect this system to have adverse effects.

As Jean-Baptiste Colbert, Comptroller-General of Finances under King Louis XIV, is believed to have said, “The art of taxation consists of plucking the goose so as to obtain the most feathers with the least possible amount of squawking.” While it is in the interest of government to make the collection of taxes as painless as possible, it is not necessarily in the interests of taxpayers to leave it almost entirely up to government to fill out their tax returns on their behalf.

The pre-filling of tax returns consists of the government filling out some or all of the boxes on electronic or paper tax returns using the information it has at its disposal. This supposes that it makes effective use of the information that certain of its agencies already have, that it obtains what it is missing, and that it correctly analyzes the situation so that each person receives the tax credits to which he or she is entitled. In some countries, the collection of information is done in conjunction with tax deduction at source, while in others, the government itself calculates the amount of income tax to be paid. A federal program does so in Canada as of this year on a voluntary basis for low-income taxpayers.(3)

For example, the British government calculates the sums due, which are deducted directly from income at source. Since 1997, it is possible for British taxpayers to fill out their tax returns themselves if their tax situation is complex. Around a third of them take advantage of this option, which shows that it is difficult for government to know each taxpayer’s situation.(4)

A 2008 parliamentary report assessed this system and noted the extent to which it had introduced a feeling of concern among taxpayers, who no longer dared to challenge the government’s calculations. As one might expect, the government devotes more resources to resolving problems related to the undervaluation of taxes than to problems of overvaluation.(5)

What happened in the United Kingdom could very well happen here: Revenue Quebec does not hesitate to use all the means at its disposal to collect the money it is owed.(6) The government would put itself in a position of conflict of interest insofar as its goal is to collect as much income tax as possible, whereas taxpayers would like to pay less. 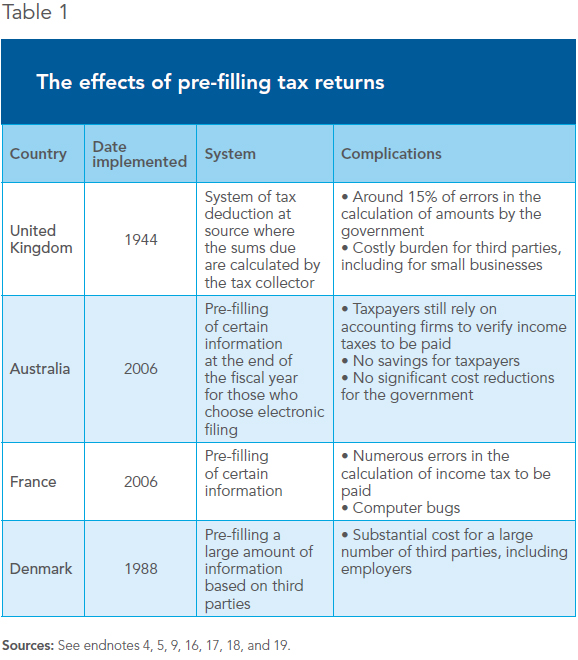 Nor is it any more obvious that time would be saved. It is likely that taxpayers with relatively simple situations would save time. The rest will still have to check and see if the government is taking into account all the deductions they are allowed, whether with the help of an accountant or a software program, as is the case for example in Australia.(7)

Numerous factors explain the amount of time that taxpayers have to spend to fill out their income tax returns, and pre-filling does not seem to play a decisive role (see Table 2). In many countries that pre-fill returns, taxpayers spend more time on them than in Canada, where it amounts to less than one hour on average. 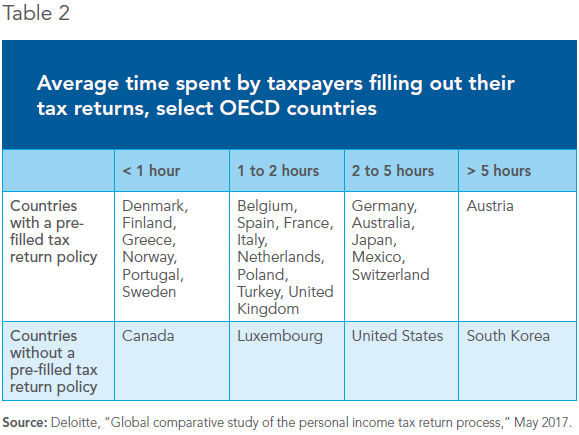 Pre-filling can also entail additional costs because taxpayers tend to mechanically sign the tax return produced by the government, even if it includes errors that go against their interests, as the example of the United Kingdom shows.(8)

To implement a pre-filled system based on third parties, the revenue agency would have to require employers, banks, and charitable organizations that receive donations to provide it with information. Administrative costs would therefore go up for these companies and organizations, which would be transformed into government subcontractors on fiscal matters.(9) Judging by the British experience, costs would be higher for small businesses.(10)

One might think on the other hand that government costs would fall thanks to simplification, which would lead, in theory, to fewer errors, less time spent by the tax authority to settle disputes, and a greater capacity to check the veracity of each taxpayer’s situation. This is doubtful. The government needs additional resources to collect data from third parties, calculate taxpayers’ incomes, transmit them, and then store the data.

Moreover, a necessary condition of the viability of a pre-filled tax return system is the simplicity of a country’s tax system, which is to say the low number of deductions, tax credits, and discretionary practices.(12) The countries of Northern Europe were the first to adopt this kind of tax return, as their tax system is simpler than that of the United States or Canada, where there are many tax credits.(13)

If Canada copied the situation of countries where tax returns must be entirely filled out by the government, like Spain, Denmark, Italy, Greece, and Norway, employees would have to reveal more information about their private lives to their employers, since this is required to claim certain tax credits. This could include information that many people would prefer to keep confidential, like contributions to political parties or medical fees.

In California, a pilot project involving a few tens of thousands of taxpayers resulted in a small net cost for the government, which was unable to recoup in additional tax revenue the costs associated with pre-filling.(14) The experiment carried out by Revenue Quebec in 2008 to test pre-filled tax returns with a population of 100,000 taxpayers in a simple situation cost $2 million. Only 30% of people contacted used the pre-filled forms.(15) The government did not follow up on this pilot project.

With people everywhere changing jobs more and more regularly, holding down multiple jobs, or earning self-employment income on top of a regular job, their tax situations are increasingly complex. This evolution of the labour market is also increasing the costs of the tax systems in Northern Europe.(16)

In several countries where the government calculates the amount of income tax to be paid, major bungling has been observed. For example, in 2010, an error by the British government led to nearly 6 million taxpayers’ income taxes being incorrectly calculated, out of a total of some 40 million taxpayers. As a result, 1.4 million of them received a letter from the government asking them for money, while 4.3 million of them received reimbursements due to overpayment.(17)

Cases of computer bugs in countries with complex tax systems, like Australia or France, have also been noted.(18) In the French case, pre-filled tax returns were adopted in 2006; one quarter of tax returns included an error the first year, and in 2018, 500,000 returns had undervalued the amount of tax to be paid. They had to be modified by the taxpayers themselves.(19)

Canada’s recent experience in another file is not reassuring. The implementation of the Phoenix pay system for federal government employees has given rise to a comedy of errors. Hundreds of thousands of transactions with government employees were treated late, with some employees going months without receiving a paycheque. In general, Ottawa estimates that “half of civil servants are dealing with some sort of pay problem.”(20) The unanticipated costs to get this pay system in order total $2.2 billion over seven years.(21) It is therefore legitimate to doubt the government’s ability to manage an infinitely more complex tax collection system across the country.

In a self-reporting system, freedom of choice and competition between thousands of professionals or between different accounting software programs allow taxpayers to claim the tax credits they are entitled to and calculate, at a lower cost, the exact amount of income tax to be paid. This also limits the seriousness of errors, since an error committed on one tax return does not affect millions of taxpayers.

Moreover, whether it is taxpayers themselves or their accountants who fill out tax returns, they have greater financial incentives to adopt secure and effective practices in terms of data protection, by constantly adapting to the new risks they face. If the government took over the responsibility of filling out tax returns, these incentives would disappear.

Consent to taxation has been a part of the democratic tradition of Western countries for centuries.(22) For there to be enlightened consent, taxpayers must be aware of the information that concerns them.(23) With a pre-filled tax return, taxpayers risk no longer being able to correctly assess their contribution, and as a result, paying less attention to the evolution of the fiscal policies that concern them.(24)

Such a system also reinforces the fiscal illusion, which is to say, the tendency of taxpayers to underestimate the taxes they pay compared to the services provided by the government.(25) Already, this evaluation is not easy to make; if, in addition, we no longer make an effort to look into the question once a year by filling out our tax returns, we will be even less aware of it.

Democracy necessitates transparency in taxation.(26) The presence of well-informed citizens is one of the best ways to ensure that they participate more actively in the public debate and have a better understanding of fiscal and economic issues. In the system that prevails in Canada, the need to fill out tax returns means that citizens at least have an opportunity once a year to sit down and think about public finances and the contribution that they must provide. Pre-filled income tax returns would, on the contrary, remove taxpayers’ sense of responsibility.

A healthy democracy needs its citizens to be able to keep the government accountable and understand the taxes they are asked to pay. International experience has shown that pre-filled tax returns did not necessarily reduce costs for taxpayers, increased them for businesses and the government, and also caused several adverse economic and societal effects.

The goal of reducing the costs of tax compliance, sought by partisans of pre-filled tax returns, is a laudable one. There is, however, a less expensive, less risky, and more equitable way of achieving it: Simplify the tax system as a whole.