The Quebec government wants to centralize the health care system even more with Bill 130, giving the Health Minister more power over administrators and over the management and operation of hospitals. The government would be better off following the example of Sweden, which has successfully moved in the opposite direction, in addition to benefiting from the contribution of the private sector.

Media release: Health care: The government is missing the mark with Bill 130

The Quebec government wants to centralize the health care system even more with Bill 130, giving the Health Minister more power over administrators and over the management and operation of hospitals.(1) The government would be better off following the example of Sweden, which has successfully moved in the opposite direction, in addition to benefiting from the contribution of the private sector.

Since the 1990s, Sweden has undergone a transformation in the way health services are delivered. Many private care providers now operate side by side with public providers, seamlessly integrated into a publicly funded system.(2) Access remains universal, with patients making copayments to cover a small fraction of the cost of doctors’ visits, hospital stays, and medication.(3) Yet care provision is decentralized, autonomously managed, and competitive, resulting in better access to care than we enjoy here.

The Swedish experience shows that there is no contradiction between the private management of care facilities, on the one hand, and equal and universal access to care on the other. This is because private facilities can be funded the same way as their public counterparts, namely through public funds.

Such “provider pluralism” is a way to increase patient choice, reduce waiting times, and improve the overall quality of care. Far from being a threat, integrating private provision of care into the system in recent decades has helped make Sweden’s egalitarian values sustainable.

The most radical change has taken place in primary care, with better access and shorter waiting times thanks to entrepreneurs opening new clinics. As far as the patient experience is concerned, those who visit private clinics are treated the same way as they would be in public clinics. They are charged the same small copayments, and have access to the same kinds of services.(4) They are free to consult the clinic of their choice, public or private, and no one is turned down based on health condition or financial situation.

Thanks to competition between public and private providers, primary care in Sweden today is more welcoming, versatile, and service-oriented. Swedes of all political stripes appreciate this development. In a recent poll, 85% of those surveyed said that choice in health care is important to them, and 90% consider it essential to be able to turn down a care provider they are not satisfied with.(6)

Autonomous Hospitals in a Decentralized System

In addition to private clinics, Sweden also has privately managed hospitals, some run by traditional non-profit organizations, others by for-profit companies. These are contracted by regional health authorities to provide services to the public.(7) As in the case of clinics, patients can choose where they want to be treated, in public or private hospitals, and they have access to the same kinds of services and are charged the same small copayments in either case.

Private facilities play an important role, not only in the care they provide to their patients but also as a benchmark of the performance of publicly managed hospitals, which remain predominant.(8)

For a country that is often held up as an example of a welfare state to be emulated, Sweden’s degree of bureaucratic control of the health care sector is surprisingly low. The limited role of the national government in health care is stipulated in the country’s constitution.(9) Essentially, it is responsible only for establishing principles and guidelines, patient safety, and setting the political agenda.

As for the funding and provision of services, they fall under the jurisdiction of Sweden’s 21 county councils.(10) It is up to each county council (governed by boards of elected representatives) to arrange, finance, and oversee the way health care operates in each county.(11) Some regions function with “market-oriented” strategies, applying financial incentives like linking reimbursement to the volume of services provided. Other regions still allocate hospital funding according to global budgets.(12)

But regardless of such regional variations, overarching national policy makes it clear that hospital administrators, whether public or private, have substantial autonomy. They have full authority to adjust service provision based on demand and resources, including the power to hire or lay off doctors and other staff.

This balance of power between the elected regional authority and the hospital management does not preclude political action if a hospital underperforms or exceeds its given budget. Hospital management must also comply with labour market and environmental legislation, rules on the reporting of statistics, and so forth. But again, hospital administrators are entrusted with the authority to handle such tasks, without any specific hospital-related rules.(13)

The Swedish health care model shows that there is no contradiction between private provision of care and equal access to care, given a sound policy framework and decentralized management. Swedes see no difference between public and private in terms of how they access their system, but they do benefit from choice, better access to care, and better service overall.(14) A key part of the success of the Swedish model can also be attributed to regional and hospital-level autonomy, a lesson that our politicians, with their tendency to prefer centralization, could benefit from studying. 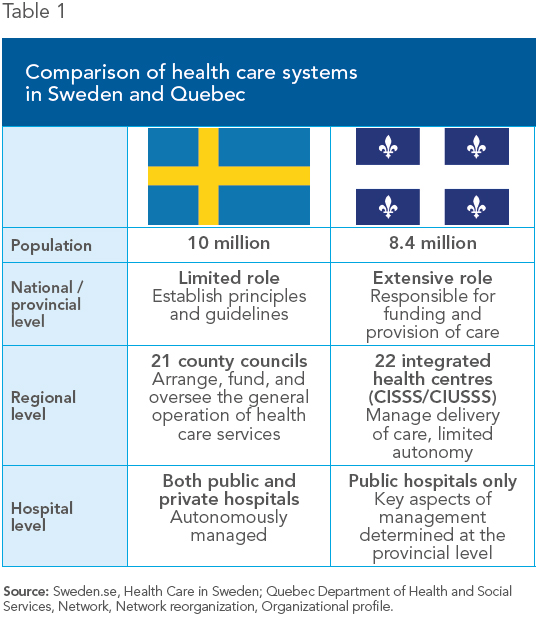 This Viewpoint was prepared by Jasmin Guénette, Vice President of the MEI, and Johan Hjertqvist, President of Health Consumer Powerhouse, which publishes the annual Euro Health Consumer Index (EHCI), in collaboration with Germain Belzile is a Senior Associate Researcher, Current Affairs at the MEI. The MEI’s Health Care Series aims to examine the extent to which freedom of choice and private initiative lead to improvements in the quality and efficiency of health care services for all patients.