Media release: Supply management pushes up to 190,000 Canadians into poverty

The Uneven Burden of Supply Management

The immediate objective of supply management policy is to restrict the supply of poultry, eggs, and dairy products. Production quotas that farmers must acquire are the main tool used to restrict production. In order to keep Canadians from importing less expensive goods from other countries, prohibitive import duties are imposed on these products.(1)

Estimates of the extra cost borne by the average Canadian household have generally been quite high: from $300 to $444 a year per household.(2) Proponents of supply management often argue that the policy supports the incomes of the 13,500 farm households in the dairy and poultry sectors.(3) The costs, however, are borne by 35 million Canadians.

This burden falls disproportionately on poorer households. A recent estimate found that after controlling for consumption patterns, the poorest 20% of Canadian households paid $339 more per year than they would have in the absence of supply management, representing 2.29% of their incomes. In comparison, the richest 20% of Canadians paid $554 more, but this only represented 0.47% of their incomes.(4) This has the concrete effect of essentially pushing many households into poverty.

How Many Canadians Are Pushed into Low-Income Status?

To estimate the number of Canadians pushed below the poverty line, we relied on the Survey of Labour and Income Dynamics produced by Statistics Canada.(5) The cost of supply management is estimated by comparing prices in neighbouring American states(6) with prices reported in Canada by Statistics Canada.(7) To capture the total cost of this policy, we constructed a basket of goods consumed by Canadians.(8)

The difference between the costs of Canadian and American baskets represents the cost of supply management. Our estimate of the burden of this policy is in line with that found by other researchers ($438 for the average Canadian household in 2011).

We then calculated the extent to which supply management effectively pushed Canadians below the poverty line. We used two different lines to provide a range of estimates. The low estimate is based on the Basic Necessities poverty line calculated by Christopher Sarlo of the University of Nipissing.(9) That poverty line is a measure of absolute poverty, designed to capture the deepest levels of material deprivation.

The other measure, provided by Statistics Canada, is a measure of relative poverty. The Low Income Cut-Offs (LICOs) are thresholds below which families spend 20 percentage points more of their incomes than the average family on food, shelter, and clothing.(10) Although it is not a measure of poverty in the sense of material deprivation, it is a measure of the precarious situation of households.

We also used two measures of disposable income, again to provide a range of estimates. In each case, we then calculated the number of households (and of individuals) that are below the poverty and low-income thresholds, but that would be above them if they had at their disposal the additional amounts they spent because of supply management. 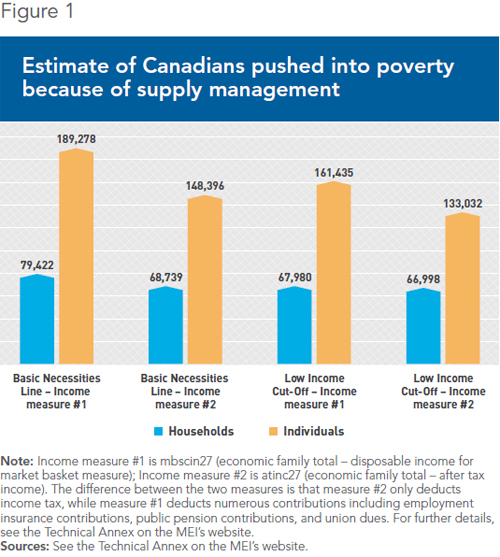 Those who are preoccupied with the plight of the poor should reflect on the burden imposed upon them by supply management. A reform plan that would phase out production quotas and import duties would benefit all Canadian consumers, but it would especially benefit poorer individuals, raising their living standards and effectively lifting many of them out of poverty.

This Viewpoint was prepared by Vincent Geloso, Associate Researcher at the MEI, and Alexandre Moreau, Public Policy Analyst at the MEI. The MEI’s Regulation Series seeks to examine the often unintended consequences for individuals and businesses of various laws and rules, in contrast with their stated goals.