The Economic Analysis of Corruption

By its very nature, regulation prevents companies and individuals from making choices that they would have made in the absence of such regulation. This creates incentives to influence the decisions of the government and of representatives in order to obtain benefits and privileges. Government intervention can benefit a company by awarding it a contract or by exempting it from certain costs, allowing it to circumvent regulation, for example.(3)

In the economic analysis of corruption, the benefits and privileges that stem from the government’s economic intervention are exchanged for some gain. This can be a financial gain, if a company offers a government representative a bribe, but it can also be of a different kind, like higher status within a political party, if a corrupt politician does not directly pocket the bribe but rather gives it to the party and thereby consolidates his or her role and political influence.

Figure 1 shows that Transparency International’s Corruption Perceptions Index is highly correlated with the Economic Freedom of the World index published by the Fraser Institute. This means that when the size and scope of the government in the economy are smaller, there is less corruption. 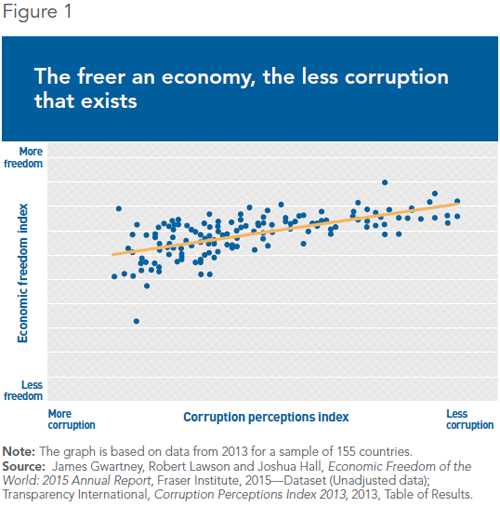 Scandinavian countries are sometimes cited as counter-examples. These countries are reputed to have large governments, but little corruption. However, the size of the “regulatory” state, which is relatively small, explains Scandinavia’s distinctiveness.(4) While taxes are high and government spending represents a considerable share of the economy, companies have relatively few administrative formalities to follow, approvals to obtain, and regulations to respect. When the analysis is carried out based on this measure, this counter-example disappears.(5)

Corruption is therefore not inevitable. By reducing the size of the regulatory state, opportunities for corruption are reduced, as are regulations resulting from corruption. Another effective policy for mitigating corruption is relying on increased competition.

For example, in the case of public procurement contracts, greater competition among bidding companies is one of the remedies for corruption recommended by the OECD.(6) Indeed, the fewer competitors there are vying for a procurement contract, the easier it is for the procuring authority to dismiss some of them, or for the bidders to agree to rig the bidding.(7) By repealing rules that limit the number of participants, like calls for tender specifying a particular technology or certification, and by liberalizing the market through free trade agreements like the one between Canada and the European Union(8) that is in the process of being ratified, the number of potential bidders increases, as does the number of people closely watching the results of the public tender.

Competition is not just for companies. Government representatives can also be subject to healthy competition. Corruption is possible when one single government official, or one single body, can provide authorization or issue a permit, a situation comparable to a monopoly. If several public bodies are able to provide the same authorization, and if users are allowed to decide which one to deal with, corruption becomes much more difficult, since corrupt government officials are then competing with those who have integrity.(9)

This solution is sometimes used to reduce corruption within police forces. If criminals have to bribe multiple police forces, each having jurisdiction over their criminal activities, the size of bribes can, under certain conditions, gradually shrink to the point of disappearing completely.(10)

The economic analysis of corruption illuminates the incentives that lead to corruption, and the policies that can fight it. The size of government and the scope of its regulation, as well as competition, have a direct effect. As the historian and Roman senator Tacitus put it, “The more corrupt the state, the more numerous the laws.”

In the case of Quebec, recent episodes of corruption led to the Charbonneau Commission, which suggested 60 measures to curb and prevent the problem of corruption in the awarding of public contracts. Among these 60 recommendations, only two involve the matter of competition.(11) These two recommendations are effective solutions, validated by the economic analysis of corruption. However, even though taken individually each of the other recommendations could contribute to reducing corruption, a large proportion of them would end up increasing the size of the regulatory state, which could have the opposite effect.

This Viewpoint was prepared by Mathieu Bédard, Economist at the MEI. He holds a PhD in economics from Aix-Marseille University, and a master’s degree in economic analysis of institutions from Paul Cézanne University. The MEI’s Regulation Series seeks to examine the often unintended consequences for individuals and businesses of various laws and rules, in contrast with their stated goals.