The ongoing Trans-Pacific Partnership (TPP) negotiations between 12 Pacific Rim nations, including Canada, are raising concerns among defenders of supply management policies for Canada’s dairy, poultry, and egg industries. The federal government is undoubtedly feeling pressure at the negotiating table to modify the system. But rather than making cosmetic alterations to placate our international trading partners, it could instead seize this opportunity to put a definitive end to Canada’s anachronistic supply management policies.

The ongoing Trans-Pacific Partnership (TPP) negotiations between 12 Pacific Rim nations, including Canada, are raising concerns among defenders of supply management policies for Canada’s dairy, poultry, and egg industries. The Dairy Farmers of Canada and the Union des producteurs agricoles have both launched ad campaigns defending the system,(1) and the Ministers of Agriculture of Ontario, Quebec, New Brunswick, and Nova Scotia have all demanded that Ottawa protect supply management.(2)

The federal government is undoubtedly feeling pressure at the negotiating table to modify the system. But rather than making cosmetic alterations to placate our international trading partners, it could instead seize this opportunity to put a definitive end to Canada’s anachronistic supply management policies. And if it takes inspiration from Australia, one of the other TPP countries, it could do so in such a way as to minimize interest group opposition.

The Harmful Effects of Supply Management

The main purpose of Canada’s supply management policies, implemented for dairy, poultry and eggs in the 1970s,(3) was to protect farmers from price fluctuations. These policies have three main components: 1) fixing prices, 2) establishing tariff barriers in order to keep lower-priced foreign goods out, and 3) managing supply with quotas so as to avoid price-depressing overproduction.(4)

The beneficiaries of these policies, at least at first glance, are Canada’s 13,500 dairy, poultry, and egg farms, representing about 1/8 of all farms in the country(5) (see Figure 1). However, supply management hurts all 35 million Canadian consumers by forcing them to pay consistently more for milk, chicken, and eggs, as well as for other products that use these foodstuffs as ingredients. 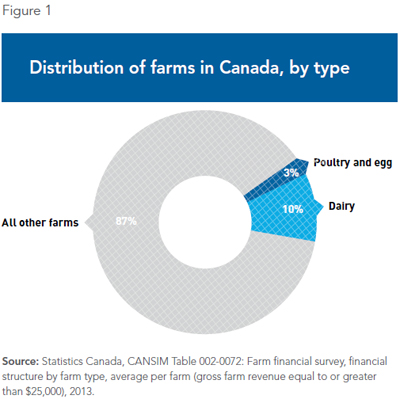 Importantly, supply management disproportionately hurts poor Canadians. According to a recent study by researchers from the University of Manitoba, supply management imposes an additional cost of $554 a year on the richest 20% of households, representing 0.47% of their incomes. In contrast, the corresponding burden for the poorest households ($339 a year) represents 2.29% of their incomes. These policies are therefore heavily regressive, hurting poor households almost five times as much as rich households(6) (see Figure 2). 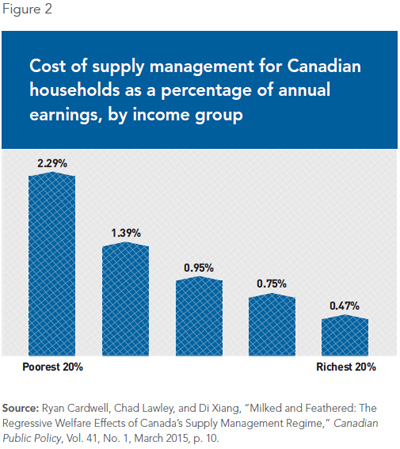 In addition to harming consumers, these policies hurt processors who must pay higher prices for the milk they use to produce staples like butter and cheese. They therefore cannot compete with cheaper international goods beyond our borders—although captive Canadian consumers are forced to buy their expensive products thanks to prohibitively high tariffs.(7)

Canadian businesses that rely on international trade are also harmed by supply management, insofar as the existence of this system in Canada has stood in the way of greater access to markets in other countries. Notably, the 7/8 of Canadian farms that are not protected by supply management policies could benefit from a liberalization of agricultural trade.

Even the intended beneficiaries of supply management are harmed by the system. While those who were initially given production quotas or who bought them cheap early on certainly benefited, those who subsequently entered the market or expanded their operations paid large sums of money for pieces of paper granting them the right to produce—sums that could have been spent on real things like livestock, equipment, buildings, and wages.(8)

And as former Member of Parliament Martha Hall Findlay pointed out in a 2012 research paper, supply management provides farmers with little incentive to innovate and become more productive. This is unfair to the more efficient and innovative farmers, whose opportunities to expand and compete internationally are thereby constrained.(9)

It would be best if supply management could be phased out in a way that treats dairy, poultry, and egg farmers fairly—especially those who had to go into debt to purchase production quotas.(10) The federal government could take inspiration from Australia, which successfully dismantled its dairy industry supply management system fifteen years ago. To help dairy producers adjust, the government bought back their production quotas, a measure financed with a temporary 11-cent-per-litre tax on the retail sale of milk from 2000 to 2009.(11)

Contrary to what some may have feared, the Australian dairy industry did not collapse after the government deregulated it. Less efficient farmers cashed out, with the number of farms falling by 50% from 1999-2000 to 2012-2013. But those who remained expanded and prospered, with output per farm increasing by 71% over this same period.(12) If we let them, Canada’s dairy, poultry, and egg farmers can similarly flourish, both at home and abroad.

This Viewpoint was prepared by Mario Dumais, Associate Researcher at the MEI and former economist and publications director for the Union des producteurs agricoles, and Youri Chassin, Economist and Research Director at the MEI.