Mario Dumais holds a master's degree in economics from the Université de Montréal. He has worked as an economist and as publications director for the Union des producteurs agricoles, as general secretary for the Coopérative fédérée de Québec and in Costa Rica as director of the Center for Integration and Agribusiness Development at the Inter-American Institute for Cooperation on Agriculture. He was a member of the Commission sur l'avenir de l'agriculture et de l'agroalimentaire québécois ("Pronovost Commission"), and took part in the Commission sur le développement durable de la production porcine au Québec as a member of the Bureau d'audiences publiques sur l'environnement. Among the defining experiences of his career, he was by turns a member and co-president of the Canadian government's Sectoral Advisory Group on International Trade (SAGIT) for agricultural products, foods and beverages, and he participated, as president of the International Cooperative Agricultural Organization, in the FAO's World Food Summit in Rome in 1996.  (High resolution photography) 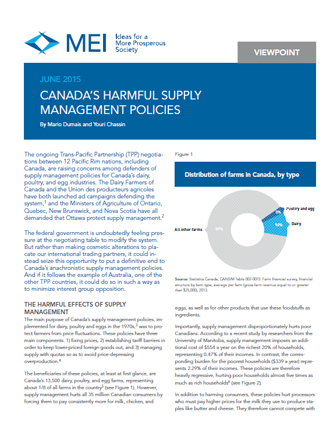 The ongoing Trans-Pacific Partnership (TPP) negotiations between 12 Pacific Rim nations, including Canada, are raising concerns among defenders of supply management policies for Canada’s dairy, poultry, and egg industries. The federal government is undoubtedly feeling pressure at the negotiating table to modify the system. But rather than making cosmetic alterations to placate our international trading partners, it could instead seize this opportunity to put a definitive end to Canada's anachronistic supply management policies.

The “supply management” model in agriculture.

One of the pillars of the present agricultural policy is the farm income stabilization insurance program.

Publication of a look at the negative consequences of agricultural policies in Quebec and Canada.

During their annual meeting at the beginning of this month, representatives of the Union des producteurs agricoles (UPA) decided to suspend the tourist season for snowmobilers in order to protest the government’s plan to reduce the costs of La Financière agricole. The dispute pertains to the exclusion of the costs of the least competitive farms when calculating the compensation to be paid out to farmers.