Canada was founded as a nation in part to eliminate the troublesome trade barriers that existed in preConfederation British North America. For example, in the Province of Canada, George Brown, a reform-minded politician from Canada West (now Ontario), remarked how a trip to Nova Scotia or New Brunswick was like going to a foreign country, where a “customs officer meets you at the frontier, arrests your progress, and levies his imposts on your effects.”

Despite the successful formation of the Dominion of Canada in 1867 out of disparate, divided provinces in British North America, and despite a constitutional clause that specifically endorsed unrestricted free trade among Canadians, the early desire of Brown, and also of Sir John A. Macdonald, Sir George-Étienne Cartier, and many others, remains unrealized 152 years after Confederation.

The Problem: The Cost

Canadians lose out when internal free trade is hampered.

In recent years, provincial, territorial, and federal politicians have increasingly endorsed that early vision. Most have spoken out in favour of free internal trade and also agreed to a “template” of sorts, namely the 2017 Canadian Free Trade Agreement (CFTA), the aim of which is to remove remaining barriers to trade among the provinces and territories in everything from wine, beer, and spirits to transportation regulations which impede the free flow of goods and services cross-country.

To further that goal, this report, an Internal Trade Provincial Leadership Index, will begin tracking progress toward one Canada, free of internal trade barriers. This report surveys actions and statements by government officials of all ten provinces, three territories, and the federal government, though only the provinces and territories are compared for the index, given that some matters are sub-national.

We start with a qualitative look at some issues that have been in the news, and that consumers can easily relate to. These include alcohol importation rules and automobile insurance, both common consumer purchases that also have available, relevant data. They also include energy pipelines and market access, as Canada’s natural resource sector (including oil and gas) is the country’s largest contributor to GDP, employment, and tax revenues.

We then look to the 2017 Canadian Free Trade Agreement for our quantitative ranking. The provinces and territories have multiple exceptions listed to the CFTA. We total the three types of exceptions, listed under procurement, existing measures, and future measures, for each province and territory and rank them accordingly, adjusting the totals to account for official announcements eliminating these exceptions.

Alberta is in first place thanks to its recent elimination of most of its exceptions in the CFTA, followed by British Columbia and Manitoba, tied for second after the latter also eliminated some of its exceptions, while Saskatchewan takes fourth place. Bringing up the rear with the most exceptions are New Brunswick, Yukon, and Quebec. 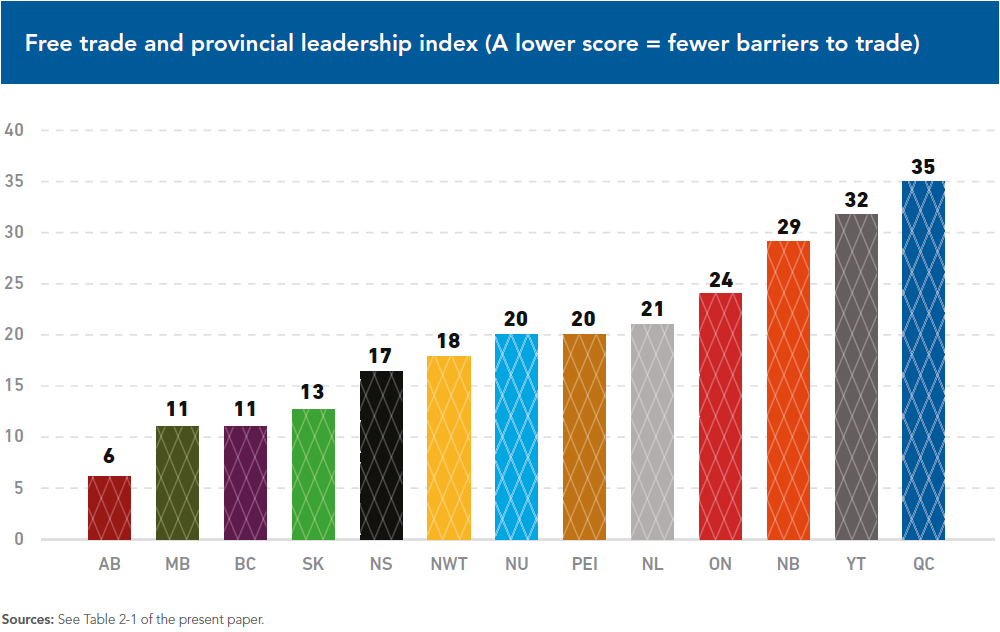 Remedies: How Provinces and Territories Can Improve Their Scores

In broad terms, there are three possible remedies to internal trade barriers.

Canadians Want One Country, One Market

Despite the wide range of scores, Canadians across the country are clear that they want Canada to be one country, with one open market. In a 2017 Ipsos poll commissioned by the MEI, nine out of ten Canadians agreed that they should be allowed to bring any legally purchased product from one province to another. Canadians really do want what Macdonald, Cartier, and their colleagues pressed for in 1867: unrestricted free trade.