According to the authors of this publication, the Quebec government’s tabling of Bill 21 aiming to ban the exploration and production of hydrocarbons will hurt the province’s economic development potential and undermine its role in reducing global greenhouse gas emissions.

This Economic Note was prepared by Gabriel Giguère, Public Policy Analyst at the MEI, and Miguel Ouellette, Director of Operations and Economist at the MEI. The MEI’s Energy Series aims to examine the economic impact of the development of various energy sources and to challenge the myths and unrealistic proposals related to this important field of activity.

The Quebec government’s tabling of Bill 21(1) aiming to ban the exploration and production of hydrocarbons will hurt the province’s economic development potential and undermine its role in reducing global greenhouse gas (GHG) emissions. While the federal government is not preventing the development of the oil and gas sector,(2) which allows entrepreneurs to stimulate the Canadian economy, the provincial political parties represented on the Agriculture, Fisheries, Energy and Natural Resources Committee unanimously endorse(3) this law, and by extension, the expropriation of oil and gas companies, ignoring both the province’s energy needs and respect for private property.

Quebec’s energy needs are considerable, but successive political decisions have ensured that there is no hydrocarbon development or exploration in the province.(4) And as Quebec develops neither natural gas nor oil, the province depends exclusively on imports.(5)

The Quebec population’s oil needs make up an important part of its energy needs. Oil imports related to the province’s supply and use for 2019, namely before pandemic-related reductions in demand, amounted to over 202,000 barrels per day, on average.(6)

Moreover, natural gas also accounts for a significant share of the energy consumed in Quebec (13%).(7) As the province does not produce natural gas commercially,(8) despite substantial reserves,(9) this resource is imported, along with oil, mainly from Western Canada and the United States,(10) for several billion dollars a year(11) (see Figure 1). Natural gas consumption in the province for the year 2021 amounted to more than 6.1 billion cubic metres, for an approximate cost of over one billion dollars.(12) Given such energy needs, the Quebec government’s current policies are inadequate: The recoverable natural gas resources in the St. Lawrence Valley alone would be sufficient to meet domestic demand for at least 40 years.(13) 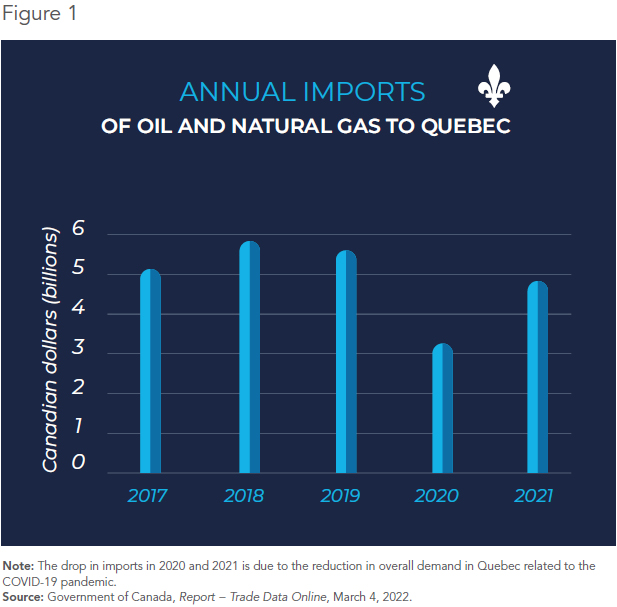 Overall, as we shall see in the next section, political decisions regarding hydrocarbons are restraining the economic development of Quebec, and by extension that of the regions where these resources are found. Recent years have been characterized by regulatory fuzziness surrounding the exploration and development of hydrocarbons in the province, culminating in Bill 21, which bans these activities.

The Growth of Regulatory Ambiguity

In 2016, in order to provide guidelines for the exploration and development of hydrocarbons,(14) Quebec’s legislative assembly adopted Bill 106, proposed by the Liberal government, which became An act to implement the 2030 Energy Policy and to amend various legislative provisions. This hefty law grouped together a set of laws, including the Petroleum Resources Act.(15) Its purpose was to ensure very high environmental protection standards through strict regulation.(16)

In 2018, after this law had come into effect, a modification was made to the Petroleum Resources Act in order to ban the development of shale gas in Quebec, which led to a legal battle since companies already held permits and were respecting the law.(17) Such decisions undermine the predictability of the regulatory framework and therefore discourage investment in the sector. Faced with growing insecurity, companies will think twice before getting involved in a hydrocarbon project in Quebec, after the Anticosti Island defeat(18) and the shale gas development ban, to name just those two cases.

The rejection of the Galt No. 6 project is a clear example of an arbitrary provincial government decision. After having received financial support from Ressources Québec in 2017,(19) the project was rejected by the minister of Natural Resources.(20) This rejection is hard to explain, since two deputy minister’s notes had recommended the project’s approval, judging it to be compliant following the technical environmental analysis carried out by an independent engineer.(21) The Court of Québec decided to overturn the ministerial decision, because the minister had not demonstrated that his decision had been made, at least in part, based on technical and scientific considerations.(22) The Court issued a word of warning: Decisions must be based on technical aspects, without which they run the risk of being arbitrary.(23)

Following this decision, the office of the Department of Natural Resources stated that it would table a bill as quickly as possible to ban the exploration and development of hydrocarbons (Bill 21), but maintained at the same time that files would supposedly be treated separately.(24) This bill will have the effect of unfairly expropriating oil and gas companies since they have not broken any law. To compensate the financial and human resources invested by these companies, the government proposes to reimburse a portion of these investments, up to 75% of the costs of closing wells plus the buyback of permits granted in recent years.(25) Any compensation related to potential economic benefits has been completely ruled out, and even ridiculed by the minister of Natural Resources, who characterized the potential of hydrocarbons as a “Homeric tale.”(26)

But governmental opposition to hydrocarbons goes beyond exploration and development on Quebec soil.(27) Indeed, the rejection of the Énergie Saguenay project in 2021 demonstrates once again the uncertainty of projects in the oil and gas sector. This project consisted of liquefying natural gas from Western Canada for export overseas.(28) The goal: to provide a cleaner resource than coal in order to reduce global GHG emissions.(29) This liquefaction plant project in the Sague-nay had the potential for substantial economic and environmental benefits.(30) Let’s not forget that it is rural regions that could have benefited from this project, regions with a per capita GDP that is lower than the provincial average.(31) Also, such decisions create uncertainty for all natural resource extraction sectors.

The government’s position is clearly against the oil and gas sector, but it only takes into account the local repercussions of development rather than all the international environmental benefits, not to mention the economic benefits for the province.

A Bill with Serious Environmental and Economic Consequences

In the coming years, global energy demand will grow, including demand for hydrocarbons.(32) Indeed, global demand for natural gas is projected to increase 30% by 2050,(33) according to current policies, and oil demand 9% by 2045,(34) an enormous growth opportunity that the provincial government cannot afford to simply sweep aside. To ensure the reduction of GHG emissions, natural gas should form an integral part of the energy basket of many countries where coal still plays a major role, as natural gas pollutes only around half as much as coal.(35) In fact, the transition from coal to natural gas in the world, from 2010 to 2018, saved 500 million tonnes of CO2(36) from being emitted, the equivalent of the GHG emissions of the province of Quebec for nearly 6 years(37) at 2019 GHG emission levels(38) (see Figure 2). 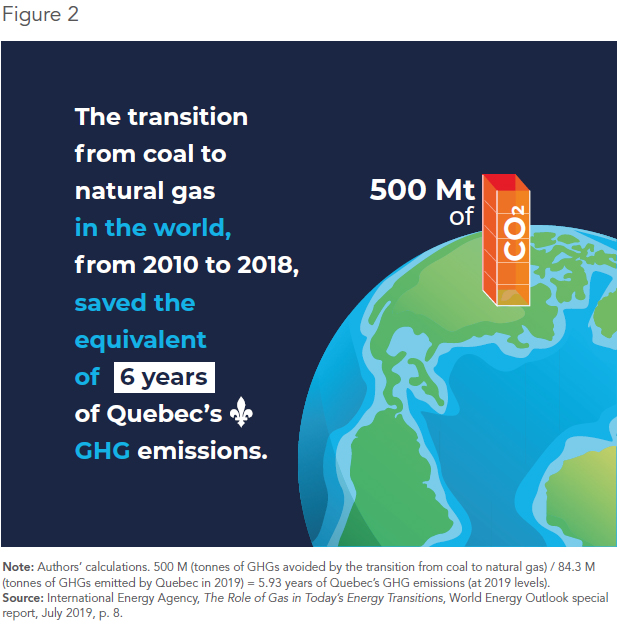 Quebec has the potential to play a leading role with its 2.8 trillion to 8.5 trillion cubic metres of natural gas reserves, enough to fill between 2.8 billion and 8.5 billion Olympic-sized swimming pools.(39) The government will have to reconsider its energy policies in order not to prevent the development of natural gas, which has the potential to reduce global GHGs. Indeed, the proven beneficial environmental impacts of adopting natural gas led the federal government to call LNG “clean energy.”(40) The European Union also wants to start labelling natural gas as a natural, “green” resource for decarbonizing the economy.(41)

Quebec’s energy policy is restraining the economic development potential of the province. This potential is far from negligeable given our substantial reserves of natural gas and oil. The development of the natural gas in the Utica Shale in Quebec, which is located in the St. Lawrence lowlands, between Montreal and Quebec,(42) would by itself allow for the creation of the equivalent of 230,000 quality jobs for one year and a total gain in Quebec’s GDP of up to $93 billion.(43)

If Bill 21 is adopted, it will undermine Quebec’s economic development potential as well as its role in the global energy transition. The Quebec government must reverse course on Bill 21 to allow the province to play a leading role in the global GHG emission reduction effort and to develop a strong and resilient economy.