This Economic Note was prepared by Miguel Ouellette, Director of Operations and Economist at the MEI, and Maria Lily Shaw, Economist at the MEI, in collaboration with Gabriel Giguère, Public Policy Analyst at the MEI. The MEI’s Regulation Series aims to examine the often unintended consequences for individuals and businesses of various laws and rules, in contrast with their stated goals.

Steep rises in the prices of building materials, coupled with the supply chain disruptions of recent years, have caused construction costs to balloon. While this is true across the country, the regulatory framework governing construction in Ontario presents additional challenges that further drive up construction costs and do nothing to shield Ontarians from soaring prices. When different entities issue calls for tender for the construction of public infrastructure, such as schools or hospitals,(1) gaps in the current regulatory framework prevent healthy competition between bidders, which drives up prices.(2) More specifically, there are blind spots in Bill 66, including restrictive project labour agreements (PLAs) and the option of opting out of the law when it was passed. A second factor contributing to high construction costs in Ontario is the rigidity of the skilled trades training programs, which limits the number of available workers in the labour pool.

The cost of public construction projects has a direct impact on the pocketbooks of all Ontario taxpayers. This publication provides concrete recommendations to counter the trend of rising construction prices through increased competition.

The Importance of Bill 66

Bill 66, An Act to restore Ontario’s competitiveness by amending or repealing certain Acts, in force since 2019,(3) allows different public entities—school boards, universities, and hospitals, to name just a few—to consider all qualified companies when accepting tenders for public construction projects, regardless of union affiliation or lack thereof. Prior to the bill’s adoption, Ontario municipalities planning to build or renovate public infrastructure could only consider tenders from construction companies belonging to a single union.

This unjust rule prevented many Ontario construction companies and their workers from bidding on public infrastructure projects, regardless of how qualified, innovative, or respected they were. For example, in the Region of Waterloo, 83%(4) of qualified construction companies were ineligible to bid on public construction projects. This restriction has proven costly to municipalities, some of which estimate that they have had to spend millions of dollars more every year due to the limited number of bids and the lack of competition in the bidding process.(5)

The passage of Bill 66 therefore corrected a costly flaw in the public tendering process by removing barriers to bidding on public construction projects. Today, all taxpayers and all Ontarians are reaping the rewards.

A study conducted two years after the restrictions were removed in the region of Waterloo found that the new measure resulted in nearly 50% more bids. The number of unique businesses bidding on contracts with the region rose from 15 to 74. In other words, the region received bids from nearly five times as many bidders as it could before the regulatory barriers were removed.(6) The increased competition saved the region of Waterloo $24 million in the first two years following the adoption of the new legislation due to a 14% drop in the average price of the winning bid.(7) This trend has been observed in other regions as well, such as the City of Hamilton, where savings on construction costs for public projects are estimated to have averaged up to 21%, or $7 million in a single year.(8)

Though indisputably a step in the right direction, this bill is hardly a panacea, as it has blind spots that prevent its uniform adoption across the province. Indeed, some municipalities and public entities are finding ways to circumvent the intended effects of this law and maintain the obligation to hire workers from a single union or a select group of unions, either through restrictive PLAs or by opting out of the legislation entirely, as the City of Toronto has done. It is these types of barriers to the competitiveness of Ontario’s construction industry that must be removed in order to fully realize the potential for taxpayer savings.

A restrictive PLA is a voluntary agreement between a public entity and a union whose purpose is to provide a certain stability for a construction project that may have a significant economic impact, such as a hospital or school.(9) These types of agreements should be completely prohibited, since they allow the municipality or public entity that has entered the agreement to award companies affiliated with the signatory union exclusive bidding rights on the construction project in question, which is precisely the practice that Bill 66 was intended to abolish.(10)

The full impact of these agreements will be plain to see when construction of the new Civic campus at the Ottawa Hospital is complete, as those responsible for the project have committed to a restrictive PLA.(11) Our preliminary estimates indicate that the project could cost taxpayers between $168 and $525 million more by 2028 as a result of this agreement.(12) It is unacceptable for a public entity to make taxpayers pay more by granting exclusivity to only a certain group of affiliated workers. And in addition to mismanaging their tax dollars, such agreements mean that many skilled tradespeople cannot be hired.

In light of this, the Ontario government must establish a clear rule with the government agency responsible for supporting public infrastructure activities, Infrastructure Ontario.(13) Specifically, it must prohibit practices that impede healthy competition between qualified construction firms bidding on government contracts.

Upon royal assent of the 2019 Restoring Ontario’s Competitiveness Act, public entities subject to the law were free to permanently withdraw within three months(14) of its adoption.(15) Toronto did just that when elected officials decided to maintain union exclusivity for public infrastructure projects, effectively upholding the status quo.(16) They did so despite the consensus found in empirical studies that have repeatedly demonstrated the benefits of competition in the construction industry and the savings realized by other municipalities that have adopted the Act by majority vote.(17) In 2019, over $1.5 billion(18) was spent on public infrastructure in Toronto. According to the City of Toronto’s estimations, it could save 1.7%(19) on its costs if it opened tenders to all qualified companies. Thus, we calculate that the total amount of public funds that were wasted in 2019 is at least $25.9 million.(20)

However, the city of Toronto’s estimation has been harshly criticized by a number of researchers for being incomplete.(21) Other more credible studies have estimated that the potential savings of a more competitive tendering process could reach 8% to 25%,(22) thus bringing total savings to between $122 and $381 million(23) for 2019 alone.

The city’s public schools would notably benefit directly from reductions in construction costs. Indeed, Torontonians are all too familiar with the exorbitant prices the Toronto District School Board pays for work done in public schools by the winning bidders. The bill for installing an electrical outlet in a school library is $3,000, for instance, and installing a $17 pencil sharpener costs no less than $143.(24)

Maintaining the status quo will have major repercussions for Ontario’s construction industry as a whole, but also for the province’s taxpayers. By withdrawing from Bill 66, the City of Toronto is forcing all taxpayers in the province to pay more of their hard-earned money for new public infrastructure projects in the most populous city in Canada,(25) money that could instead be used to improve Ontario families’ standard of living. Therefore, in order to ensure the best possible stewardship of public funds, the City of Toronto should consider further legislation that would require its public entities to use a tender process that is open to all qualified contractors, regardless of union affiliation, when issuing a call for tenders for construction projects. In other words, the Ontario government should amend the Act or adopt a measure for the construction industry in Toronto to ensure that all qualified firms and workers can work. 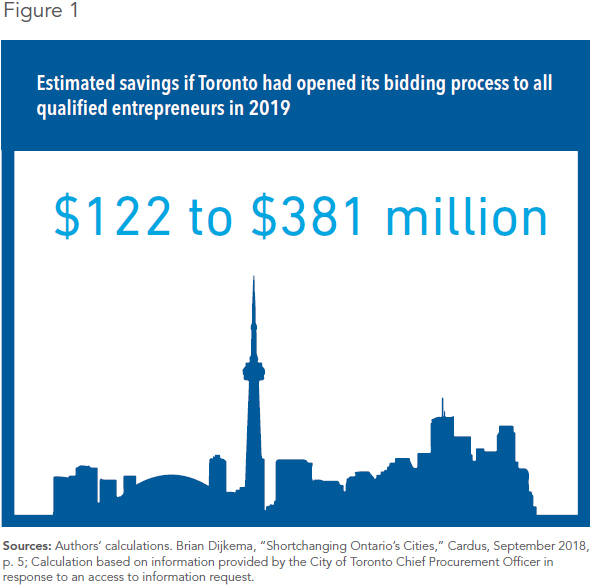 The Rigidity of Training Programs for Skilled Trades

The current picture of the construction labour market is bleak, and structural reforms of training programs are needed to expand the pool of workers in this important industry.

With a shortfall of 100,000 employees over the next few years, Ontario’s construction industry faces a significant challenge.(26) Moreover, the post-pandemic economic recovery and long-term growth of the construction industry may be slowed by the lack of workers.(27) The labour shortage is also driving up the cost of infrastructure projects because of the delays it causes, particularly in the construction industry. While the government has invested $90.3 million via the Skilled Trades Strategy to encourage Ontarians to enter and complete studies related to skilled trades, more structural measures are needed to turn the province’s fortunes around, starting with skilled trades training programs.(28)

One of the measures to adopt to remedy the situation is to replace certification (which is based on the number of hours worked) with a modulated system that assesses and accounts for skills. A rigorous, well-designed system would ensure that students have acquired all of the skills necessary to be an apprentice in their chosen trade, regardless of how they acquired them. What’s more, a certification process that is modulated would allow individuals that have not fully completed their training for a skilled trade to perform on a construction site the specific elements for which they have been certified. This would provide the construction industry with an academic certification framework that allows it to train more qualified workers in skilled trades and meet the growing needs of the market.

The money cities have saved thanks to Bill 66 underscores the importance of a diverse and competitive bidding pool in municipal procurement and the negative effects of policies that restrict competition among companies that would otherwise be qualified to bid on municipal construction projects. The Toronto case is a clear example of tax dollars being squandered, with several hundred million dollars wasted in 2019.(29) Moreover, undermining competition through the use of restrictive PLAs runs counter to the goal of optimizing public spending.

This is compounded by a severe labour shortage that could significantly impact the economic recovery of Ontario’s construction industry. According to the Bank of Canada, industries facing labour shortages are 65% more likely to experience anemic economic growth.(30)

In order to open up Ontario’s construction industry to allow full competition between firms for the purpose of optimizing the use of taxpayers’ money, we recommend that the Ontario government adopt the following measures: