Viewpoint proposing a proof of vaccination to reduce the constraints imposed on travellers and a non-mandatory, decentralized vaccine passport for other sectors

It has already been over a year since the pandemic turned our lives upside down and governments severely curtailed our individual freedoms. Thankfully, the vaccination campaign is now in full swing, so we can hope for a return to a better quality of life in the near future. This publication argues for the introduction of a non-mandatory, decentralized vaccine passport to help make this happen.

This Viewpoint was prepared by Miguel Ouellette, Director of Operations and Economist at the MEI, and Maria Lily Shaw, Economist at the MEI. The MEI’s Health Policy Series aims to examine the extent to which freedom of choice and entrepreneurship lead to improvements in the quality and efficiency of health care services for all patients.

With the vaccination campaign in full swing from coast to coast and politicians promising that everyone will be able to get a first dose by the start of summer, the idea of a vaccine passport is starting to arouse interest, but to raise concerns as well.(1) If the idea is attractive, it is of course because of its tangible benefits for vaccinated individuals, such as access to certain businesses that are currently closed or the opportunity to travel abroad more easily. After all, experiments carried out in Spain suggest that it would be possible to hold events like concerts safely given adequate protocols.(2)

Yet the large-scale implementation of a vaccine passport system, like a magic word allowing some people, but not others, access to many businesses, raises important questions about the use of confidential information and about individual freedom, in addition to operational considerations. Should it be mandatory? To what uses should it be put? What form would it take? And are we even capable of implementing such a system? The questions are many, and we don’t seem to agree on the answers. Indeed, the Biden administration has already closed the door on the introduction of a mandatory vaccine passport.(3)

Israel has been the world leader in terms of the efficiency and speed of its vaccination campaign.(4) As of April 10, 2021, over 60% of the Israeli population had received at least one dose of a COVID-19 vaccine, compared to just 22% for the province of Quebec(5) (see Figure 1). Note that the populations of Quebec and Israel are about the same size, with 8.6 million and 9 million people, respectively.(6) 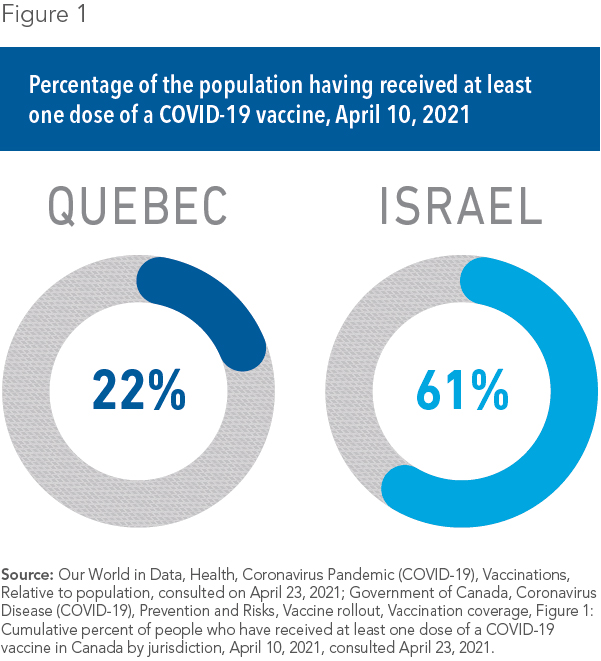 ​The government of Israel can boast of this success thanks to the reliable, up-to-date medical data that it is able to quickly share with its partner, the pharmaceutical company Pfizer.(7) This is how a small, Middle Eastern country has become a veritable laboratory capable of informing the global population on the strengths and weaknesses of the vaccines.

It is also thanks to this wealth of data Israel has at its disposal that a vaccine passport, named the “Green Pass,” could be implemented promptly.(8) This passport, available on mobile app or on paper, lets Israelis go to restaurants, fitness centres, and outdoor concerts.(9)

For or Against a Vaccine Passport?

The literature on vaccine passports is growing by the day. Whatever our opinion of those who refuse to be vaccinated, it would nonetheless be problematic for the government to marginalize them and further restrict their freedom of movement. Beyond the ethical issues involved, considerations of public health and individual freedoms behoove us to find an acceptable solution. After all, as a study published in October 2020 in the prestigious medical journal The Lancet concluded, “It is unethical to restrict freedom unless there is a real risk to other people. If we have the technology to decide who is not a risk, we should use it.”(10)

In this sense, it is difficult to imagine travelling internationally again without the emergence of a vaccine passport. Indeed, Israel, which as mentioned has a vaccine passport, notably requires foreign travellers to provide proof of vaccination or immunization.(11) Meanwhile, many other countries, including those in the European Union, seem to want to follow suit.(12) Moreover, this is not an entirely new phenomenon, since many countries already require proof of vaccination against yellow fever in order to set foot on their land.(13) Thus, not allowing such a system to emerge in Canada in some form would essentially amount to restricting the movement of the population for an unjustified length of time.

The Situation in Quebec and across Canada

The federal government and the provinces have been discussing the possibility of putting in place a vaccine passport system since the beginning of the year, but little has been made public about these conversations or about how advanced they really are. First of all, we should look at the actual capacity of our government to use such a system. Indeed, a Canadian vaccine passport presupposes easy and quick access to relevant data. Yet the different provinces use a variety of systems that do not always communicate with each other, and that are at various levels of technological sophistication. In any case, we do not have a Canadian database that would allow us to easily reproduce the Israeli model.(14)

In this context, and without delving into the constitutional issues, it makes sense to favour a decentralized model with entrepreneurs proposing different options, whether in the form of bracelets, mobile apps, or something else. Several companies have already started work on identifying the best solutions.(15) It is therefore preferable for governments to avoid duplicating this work, the results of which would likely be mixed.

In light of the benefits and drawbacks of the feasible options, it seems acceptable to us that Canada require a proof of vaccination for travellers from abroad, given the more centralized nature of the sector and the possible repercussions for the population. This would allow for a quicker end to measures restricting the mobility of vaccinated Canadian travellers, like the mandatory hotel quarantine.

Combined with this, a non-mandatory vaccine passport constitutes the most reasonable and sensible option for other sectors in order to accelerate the reopening of our economy. This would allow businesses and private establishments to require proof of vaccination in order to access their services. It goes without saying that most merchants want to offer their clients a safe environment, and the population would likely favour participating businesses.

This would also constitute an additional incentive to get vaccinated for those who are still hesitating,(16) without resorting to an excessive degree of coercion by forcing everyone to get vaccinated. With summer just around the corner, it is imperative for governments to establish a framework that facilitates the implementation of these two recommendations—namely proof of vaccination to reduce the constraints imposed on travellers from abroad and a non-mandatory, decentralized vaccine passport for other sectors—in order to finally allow people to get on with their lives.