This MEI publication found that the federal government’s “zero plastic waste” policy puts it in opposition to current and potential innovations that are coming out of the plastics industry. The policy will hurt the economy without any guarantee of helping the environment.

This Economic Note was prepared by Gabriel Giguère, Public Policy Analyst at the MEI. The MEI’s Environment Series aims to explore the economic aspects of policies designed to protect the natural world in order to encourage the most cost-effective responses to our environmental challenges.

The government of Canada is currently implementing its “zero plastic waste” policy,(1) whose goal is to reduce plastic waste in the environment. Last year, it published an order to add “plastic manufactured items” to the Canadian Environmental Protection Act, which allowed it to put in place a measure banning the production for use in Canada, and the importation, of six single-use plastic products (see Figure 1). The government intends to bring the ban into effect by the end of 2022.(2) 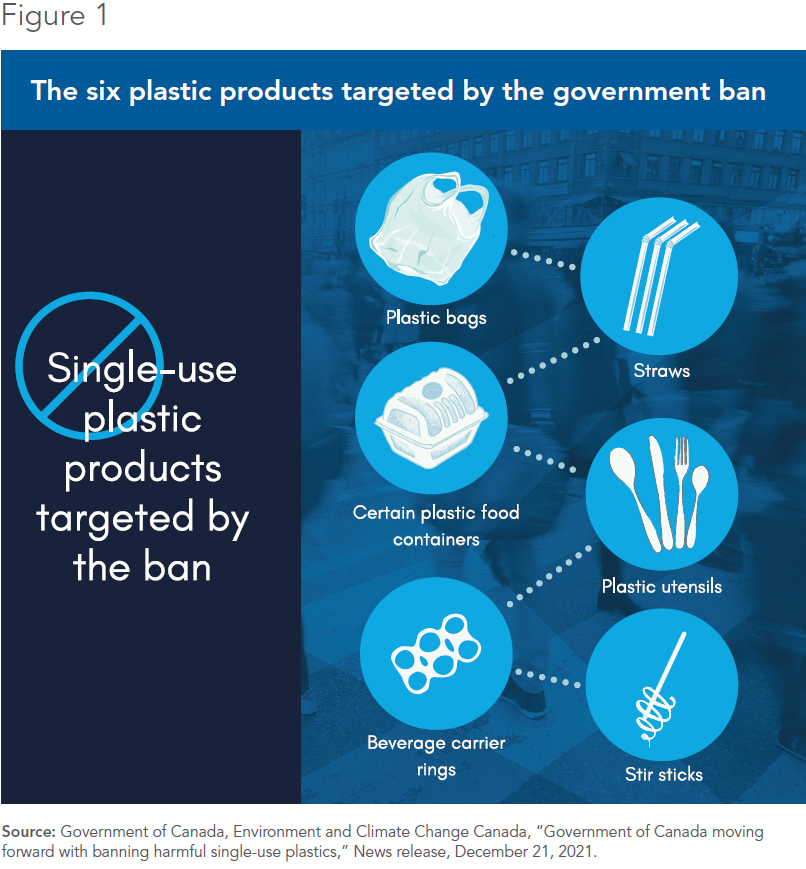 Not only will this measure ban products that can already be treated after being used, such as plastic shopping bags, but it also risks having harmful repercussions for the Canadian economy.(3) By favouring the adoption of such restrictive regulation, the government is taking a position that runs counter to present and future industry innovations.

In 2020, during the first year of the COVID-19 pandemic, revenues just from the sale of manufactured plastic products totalled over $24.6 billion(7) in Canada (see Figure 2), a reduction of a little over $1.5 billion from the previous year. Ontario alone is responsible for more than half of these revenues from the production of plastic products.(8) 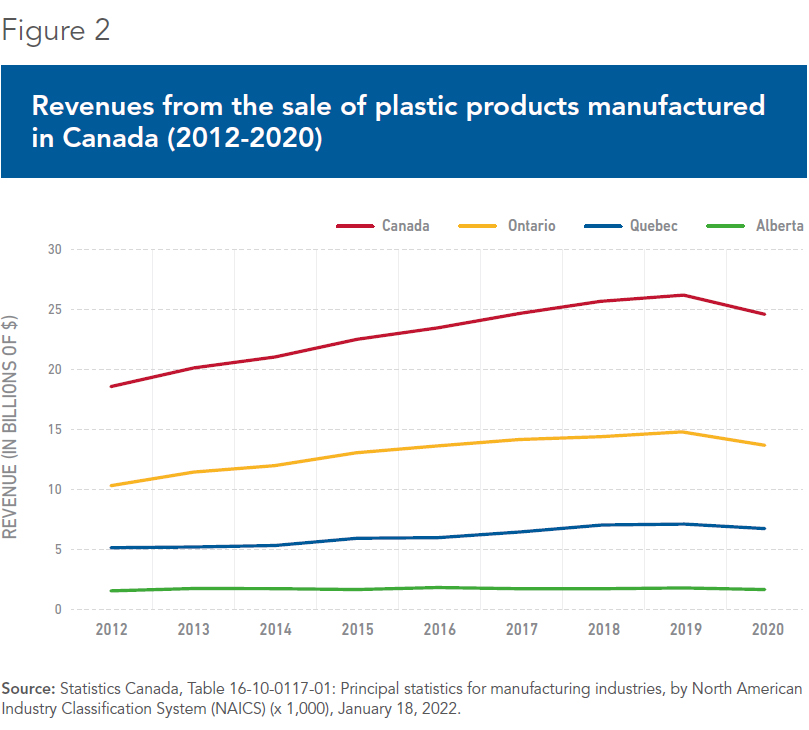 Over 85% of companies in the plastics industry are small (fewer than 100 employees), making up a substantial share of the industry.(9) The industry as a whole employed some 93,000 Canadian workers in 2017(10) (see Figure 3). 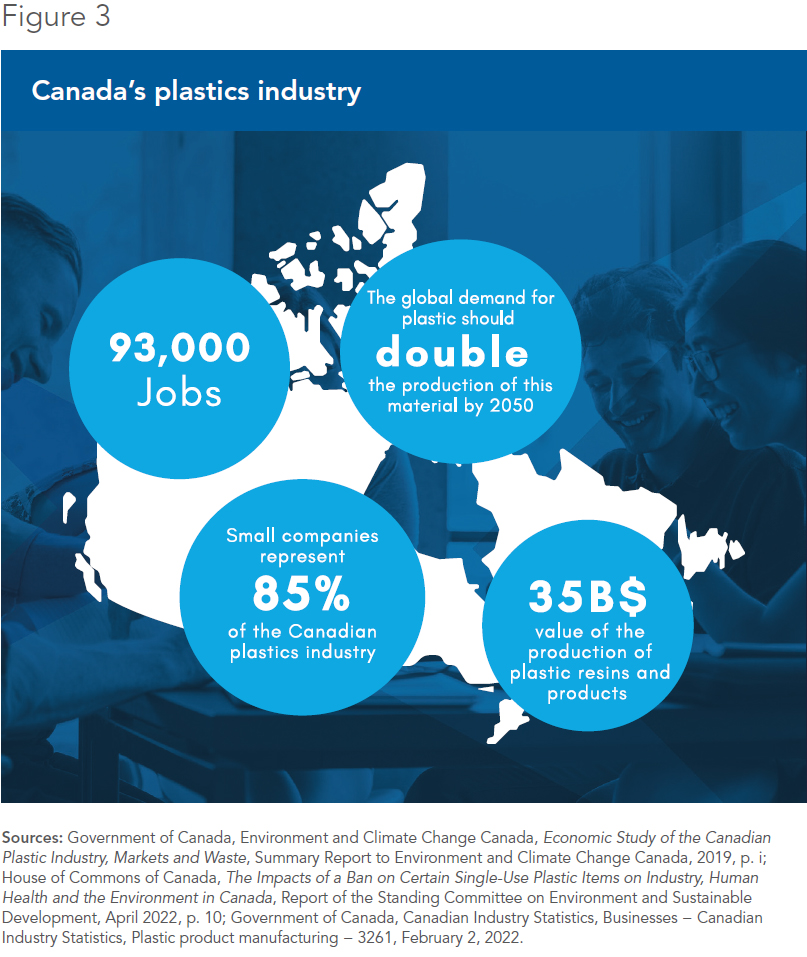 More narrowly, the single-use plastics industry represents, by one estimate, from $5.5 billion to $7.5 billion, and could account for a quarter of revenues from the production of plastic products in Canada.(11) According to this same estimate, this sector represents from 13,000 to 20,000 direct jobs and from 26,000 to 40,000 indirect jobs in the country.(12) The importance of this industry is clear. The government should therefore think twice before imposing harmful regulation upon it, especially given that the small size of many companies in the sector makes them vulnerable to the effects of such regulation.

Forecasts of global plastic use are promising for the industry and for the Canadian economy. Indeed, the use of this material, essential for the proper functioning of modern societies,(13) should continue to grow and even double by 2050.(14) However, the government of Canada must not put up overly restrictive regulatory barriers that would undermine private investment and ultimately harm the capacity of businesses located in Canada to meet this future global demand. The ban expected by the end of 2022 on the production for internal use, and the importation, of six single-use plastic products sends a negative message to the industry regarding the possibility of expanding its activities in Canada, even though, for the moment, the production of these products for export is still permitted.

The Case of Plastic Shopping Bags

For its part, the Canadian plastics industry has made certain commitments regarding sustainable development, including that of producing only fully recyclable or recoverable plastic packaging by 2030. This packaging will have to be reused, recycled, or recovered by 2040.(15) To these commitments can be added the sector’s innovations, including in terms of recycling.

Companies have already put forward systems allowing for the recycling of certain of the plastic products that the federal government wants to ban. A case in point is Modix Plastique, located in Quebec, which recovers plastic bags, among other things, and transforms them into hard pellets that can be reused to manufacture auto parts(16) or certain kinds of packaging.(17) This kind of technology gives a second life to plastic shopping bags and so reduces their environmental impact.

Moreover, other reusable products are not automatically better for the environment.(18) For a reusable bag to have a smaller environmental impact than a plastic shopping bag, it must be used many times. For certain types of reusable cotton bags to be less harmful to human health and to the quality of ecosystems and use less fossil fuels than single-use plastic bags, for instance, they must be reused between 100 and 3,657 times,(19) which represents from 2 to 70 years of weekly use.

This can be explained, in part, by the fact that cotton requires 680 times more water per kilogram for the production of fibres than plastic shopping bags, not to mention the emission of pesticides into the ground during its production.(20)

California’s ban on plastic shopping bags also had some unexpected effects. The reduction of 40 million tonnes of shopping bag waste was offset by an increase of 12 million tonnes of thicker garbage bags.(21) Banning plastic shopping bags therefore does not guarantee a reduced carbon footprint; if this were the only criterion used to measure environmental impact, the ban in California would instead have had the opposite effect of the one policy-makers expected.(22)

In another case, following the ban of single-use plastic bags in the Australian Capital Territory, the use of other types of bags also increased,(23) and the beneficial effects of this policy were therefore limited:

[T]he available information suggests that, if the ban did reduce litter over the study period, the reductions are likely to have been small. For similar reasons, the ban is unlikely to have made a material contribution to reducing ocean plastic pollution.(24)

While certain companies are already taking the initiative to recycle plastic shopping bags, the government’s ban on producing and importing these bags by the end of 2022 for use in Canada would not only victimize production and recycling companies, but it would also likely not generate the expected results. Canadians will likely turn to alternatives that are just as polluting, if not more so. The government should instead focus its efforts on setting up a competitive fiscal framework, including using credits and tax cuts to encourage the deployment of new or existing technologies in the recycling sector, which would have the benefit of avoiding the harmful repercussions of plastic shopping bag substitutes.

The government’s policy will ban food packaging it considers “problematic,” such as polystyrene, even though certain recycling centres are already able to treat this product.(25)

Moreover, the problem of food waste will surely get worse if the government continues down this road, since plastic packaging helps preserve food longer.(26) Reducing food waste has the added effect of attenuating the environmental impacts of unconsumed food (fruits and vegetables especially).(27) For example, if the GHG emissions of the production of some new packaging doubled, but it allowed a 5% reduction in wasted bread, there would then be no increase in the environmental impact of the food chain cycle.(28)

In Canada, food waste totals around 35.5 million tonnes a year, with an estimated 11.2 million tonnes that could be avoided through consumption or donation to food banks, enough to feed the Canadian population for nearly five months.(29) This is costly for Canadian families which, according to a 2020 poll, waste the equivalent of $1,100 of food a year on average.(30)

Single-use plastic helps avoid a portion of food waste. The government therefore should not ban this kind of plastic, which would be a counterproductive approach given that packaging represents only around 5% of the impact on the climate (in other words, the total production of GHGs) if we take the entire food chain into account in our calculation.(31)

In its current form, the part of the federal zero plastic waste policy aiming to ban six single-use plastic products relies on restrictive regulation rather than on innovation in the Canadian plastics industry. This will have negative economic consequences for Canada. Moreover, plastic products, including food packaging, can play a beneficial role in the fight against climate change by reducing food waste. As we saw, methods to recycle plastic shopping bags also exist, and are preferable to banning this type of product.

In order to reduce the quantity of plastic waste in the environment without penalizing industry players and Canadian consumers, the federal government should opt for the following solutions: