This Economic Note was prepared by Germain Belzile, Economist & Senior Associate Researcher at the MEI. The MEI’s Energy Series aims to examine the economic impact of the development of various energy sources and to challenge the myths and unrealistic proposals related to this important field of activity.

Since the 1920s and the work of A.C. Pigou,(1) economists have generally agreed that imposing a price on pollution emissions is the most efficient way to reduce those emissions while minimizing the drawbacks associated with interventions aiming to limit pollution. This way of doing things usually yields better results than regulation or other government interventions that do not rely on market mechanisms.

Sharing this point of view, over 3,500 economists, including 27 Nobel laureates, signed a joint statement in The Wall Street Journal recommending the use of a carbon tax to reduce greenhouse gas (GHG) emissions.(2) In Canada, the federal and provincial governments have put in place policies aiming to reduce GHG emissions, including taxing emissions, regulations, or various subsidies—to electric cars, for example. Are these policies efficient? Can we do better?

There are certain consensuses in the economic literature regarding the best policies that aim to reduce emissions of a given pollutant. We identified three conditions in particular that should be met in order for such a policy to be efficient and for it not to undermine prosperity.

First, such a policy should be fiscally neutral, which is to say that a new tax should replace other taxes that are more harmful to the economy, and not add to governments’ total tax revenues.(3) This condition is related to the negative effects of a larger government, especially in terms of economic growth.(4)

Second, the taxing of GHGs should replace the other policies that have the same objective, such as regulation of emissions and subsidies for green energy. Such policies create economic distortions, in addition to being less efficient than taxation.(5)

Third, a carbon tax should take into account whether our neighbours and competitors have a similar policy. An increase in the prices of Canadian goods and services following the taxation of GHG emissions could lead to the displacement of their production toward regions where this taxation does not exist, the result being that Canada gets poorer, relatively speaking, with no impact on emissions, or even an increase.(6)

The Taxation of Carbon in Canada

In 2015, the federal government signed the Paris Agreement on the climate. It committed then to have Canada reduce its GHG emissions 30% by 2030,(7) compared to its 2005 emission level. Most of the provincial governments had already promised their voters reductions, specific or not. Table 1 presents the current situation in Canada in June 2019.

The federal government recently imposed a new carbon tax in the provinces that did not have policies deemed satisfactory, namely Ontario, Saskatchewan, Manitoba, New Brunswick, and just recently, Alberta.(8) This tax is the cause of discontent in these provinces, which are asking the courts to prevent the federal government from imposing it.(9) The other provinces, which have already put in place satisfactory mechanisms to establish a price on CO2 emissions, will be exempt from the federal tax. The rate of the federal tax will be $50 per tonne in 2022,(10) about twice as high as the minimum price that will be in force in Quebec.(11)​

In this context, are Canada’s carbon tax policies efficient, in the sense that they respect the three basic conditions listed above?

Are the Taxes Fiscally Neutral?

In some provinces, like Quebec, carbon pricing mechanisms explicitly aim to increase government revenues.(12) In British Columbia, the tax was fiscally neutral to begin with (the government reduced individual income taxes by an amount equal to the revenues from the new tax), but this situation did not last, and the tax is now a net source of revenues for the province.(13) As for the federal tax, it will be fiscally neutral for households and certain organizations, since the Canadian government announced that it would return to them all revenues from the tax. Households will receive 90% of the revenues from the tax in the form of a cheque, which is more than the estimated amount they will have to pay for their GHG emissions.(14)

However, the federal tax will not be neutral for companies. Indeed, the federal government promised companies assistance that corresponds to less than 10% of the revenues from the tax, but this will be destined solely for small and medium sized businesses.(15) The tax will therefore not be fiscally neutral for large companies, who will not enjoy this subsidy.

Do the Taxes Replace All of the Policies with the Same Objective?

The second condition is not respected either, as governments subsidize projects to reduce greenhouse gas emissions. The purpose of the carbon tax is precisely to create incentives to reduce these emissions. In Ontario, the cost of reducing emissions through targeted policies ranges from $100 per tonne for incentives to use trucks and buses that emit less GHGs, to $500 per tonne for bike path subsidies.(16)

In Quebec, subsidies from the Green Fund had cost $2.08 billion as of February 2019, and had led to the reduction of 1.84 million tonnes of GHGs.(17) The cost per tonne of GHGs eliminated through measures financed by the Green Fund, at some $1,130, is around 56 times higher than the federal carbon tax in 2019, at $20. There is no good reason for this waste of public funds. These policies are more popular than taxing carbon and more politically expedient,(18) but they must be eliminated if we decide to tax GHG emissions, which remains the most efficient measure.

Do the Taxes Take the Competitive Context into Account?

A carbon tax must take into account the competitive context of the Canadian economy. Otherwise, it could lead to the displacement of production and investment (and also jobs) from some more heavily taxed provinces toward other provinces, or toward the United States, where GHG emissions are not taxed everywhere,(19) and where there is already a competitive advantage due to lower taxes and less burdensome regulation.(20)

Such a scenario could even entail, far from a reduction of global GHG emissions, an actual increase. For example, if aluminum plants in Canada were to close because of the carbon tax, these could be relocated to countries whose environmental record is much worse than ours.(21)

A Canadian Federation of Independent Business poll shows that the majority of Canadian SMEs would be forced to absorb the cost increases stemming from the imposition of the carbon tax.(22) It is indeed impossible for a company to pass on to consumers the cost of taxes that its competitors do not need to pay (something that is true both for the costs of the tax itself and for compliance costs associated with Canada’s multiple layers of regulation).(23) Companies must therefore reduce their costs one way or another, for example by laying workers off, by reducing their expenditures, or by moving their production to less expensive locations.

In addition to not respecting the three basic conditions (summarized in Table 2), another aspect of Canadian regulation aiming to limit CO2 emissions undermines its efficiency: its balkanization. Different carbon prices and different policies across the country increase the complexity and the costs of doing business. The different GHG emissions taxation systems therefore create additional costs for companies that operate in several provinces. 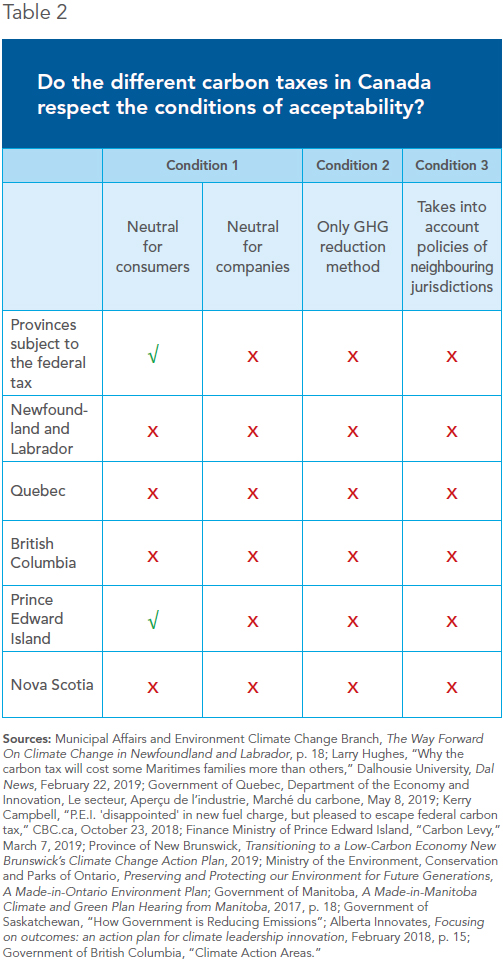 This problem is exacerbated by the intervention of the federal government, which is superimposing its regulation on top of provincial regulation. The Canadian government also adds to the level of uncertainty due to the legal challenges resulting from its intervention. It moreover seems likely that the dissenting provinces will not just give up if they lose before the courts.

If governments want to reduce Canadian GHG emissions, they have to go about it the right way. Any carbon tax should replace the whole set of other policies with the same objective, like emissions regulations and green energy subsidies. In addition to being a more efficient way of achieving objectives, this will reduce the compliance costs of regulation.

Any carbon tax should be offset by reductions in individual and corporate income taxes. These two taxes are far more harmful than a carbon tax, since they discourage work, saving, and investment.(24)

Finally, given that our most direct competitor, the United States, generally does not tax CO2 emissions, Canadian rates should remain reasonable enough to not lead to the flight of companies and production to other regions.

Canada will not save the planet single-handedly.(25) Keeping this in mind, any public policy aiming to reduce Canada’s contribution to global emissions must be based on sound economic principles. This is not currently the case.