This Viewpoint was prepared by Mathieu Bédard, Economist at the MEI. The MEI’s Health Policy Series aims to examine the extent to which freedom of choice and private initiative lead to improvements in the quality and efficiency of health care services for all patients.

The Canadian government is planning to change the way prices are set for new patented drugs and cut the maximum prices at which these drugs can be sold by up to 70%.(1) But this reform could prove very costly for patients. If it goes forward and fails to take into account the adverse effects of reference pricing systems, which have been well documented by various international bodies,(2) Canadians could see their access to new drugs slowed down or even compromised.​

A Skewed Selection of Countries

In Canada, price ceilings for drugs are set by the Patented Medicine Prices Review Board (PMPRB), a federal agency. The PMPRB takes into account various factors, notably the prices of drugs abroad, using a reference pricing system. This method involves examining current prices in certain selected countries to determine the prices at which drugs may be sold. Many countries use this system, among them 28 European Union countries.(3) So does Canada, whose reference basket is made up of Germany, the United States, France, Italy, Sweden, Switzerland, and the United Kingdom, countries with similar economies and comparable numbers of available drugs.

The PMPRB’s reform aims to change this list, increasing the number of countries from seven to twelve. The United States and Switzerland, where drug prices are high (and where more drugs are accessible) will be removed from the current list and will be replaced by Australia, Belgium, South Korea, Spain, Japan, Norway and the Netherlands,(4) where prices are generally lower and where fewer new drugs are introduced, on average.

Health Canada did not hide its intentions, either: It chose only countries where drug prices are regulated.(5) Although the intention is to lower prices, the net result is likely to be longer wait times before new drugs are introduced. Indeed, these delays are longer than in Canada in four of the seven countries newly added to the PMPRB’s reference basket (see Figure 1). 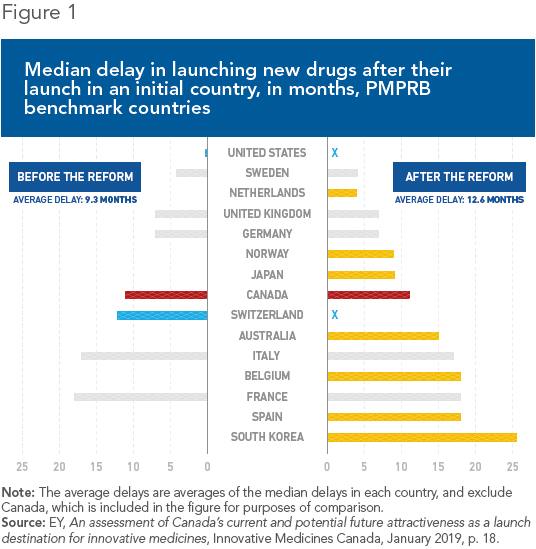 It all boils down to incentives: Manufacturers will obviously be inclined to introduce drugs first where prices are higher, in order to finance the high costs of drug research and to recover their investments. Meanwhile, they will delay launches where prices are lower, all the more so given that in many cases, these prices would later be used as benchmarks in other countries. This phenomenon has been documented in Belgium, for example, where drugs are often introduced later since prices there are lower.(6)

Canadians are currently spoiled when it comes to new molecules. Between January 2011 and August 2018, 21% of new drugs sold in Canada, 77 new molecules in all, were launched only in Canada and the United States, or arrived earlier there than in the other major markets, namely France, Germany, Spain, Italy, and the United Kingdom.(7)

While Canadians have up until now been among the first to gain access to pharmaceutical innovations, the declines of up to 70% in the maximum price could find them bringing up the rear in terms of timely access.(8) The connection between price regulation and sequence of access is indeed well established.(9)

For cancer drugs, the median delay is 11 months, which places Canada 8th in a study involving 69 countries between January 2011 and August 2018. The delay for central nervous system drugs is 16 months, and for diabetes drugs, 26 months.(10)

Despite Canada’s enviable position, and despite public policies that take into account the role of prices as signals for manufacturers, the country is not exempt from delays. This is due partly to the fact that new drugs are already submitted for approval by Health Canada six months after being submitted initially in the United States or Europe, due to the small size of the Canadian market.(11) In addition, there is in Canada a long regulatory process before drugs can be reimbursed.(12)

A forced lowering of prices could lead to additional delays, since Canada would become less attractive for manufacturers. Moreover, by making international comparisons continuous,(13) the reform that Health Canada hopes to adopt could lead to a snowball effect, through which the adoption of a low price by one of the countries used as a benchmark leads to a price drop here, which would in turn push prices lower in another country where Canada serves as a benchmark, and so on. A sudden price drop would compromise access to drugs.(14) This happened in Bulgaria, where the reference pricing mechanism caused 200 products to be taken off the market in 2012.(15)

First, Do No Harm

One of the most basic teachings of economics is that price ceilings cause shortages. The use of a complex reference pricing process does nothing to alter this very simple truth. The PMPRB should not be able to delay Canadians’ access to pharmaceutical innovations, let alone deprive them of access altogether.

New drugs contribute significantly to increasing longevity and to our quality of life.(16) The drug market is already not completely free; it is in fact very tightly regulated. However, up to now, there have still been price signals to reward innovation. Breaking this fragile link could have negative repercussions on patients’ access to innovation.