The Quebec government has on many occasions signalled its commitment to fighting climate change. The province has set several targets for reducing greenhouse gas (GHG) emissions, aiming to have them disappear almost completely by 2050. Yet Quebec’s share of global GHG emissions is so tiny that achieving the provincial objectives would have an insignificant impact on the evolution of the temperature of the planet.

This Viewpoint was prepared by Germain Belzile, Senior Associate Researcher at the MEI. The MEI’s Environment Series aims to explore the economic aspects of policies designed to protect the natural world in order to encourage the most cost-effective responses to our environmental challenges.

The Quebec government has on many occasions signalled its commitment to fighting climate change. The province has set several targets for reducing greenhouse gas (GHG) emissions, aiming to have them disappear almost completely by 2050.(1) Yet Quebec’s share of global GHG emissions is so tiny that achieving the provincial objectives would have an insignificant impact on the evolution of the temperature of the planet.

Quebec Not a Major Emitter

Situating the quantity of GHGs emitted by Quebec in a global context makes it clear that meeting its targets would have practically no effect on the climate. Canadian GHG emissions represented 1.6% of global emissions in 2013 (the latest year for which data are available).(2) Since Quebec emits around 11% of GHGs in Canada, we can estimate that the province is responsible for around 0.18% (or 18 hundredths of 1%) of global emissions. This minuscule proportion is probably overestimated, since Canada’s share of global emissions has been falling for a few years, as has Quebec’s share of Canadian emissions.(3)

Quebec wants to reduce its emissions by 20% between 1990 and 2020. This very ambitious objective represents just 0.038% (or 38 thousandths of 1%) of today’s global emissions. Given that the province has already reduced its emissions by 11% between 1990 and 2016, the remaining portion of the objective to be achieved by 2020 represents an even tinier portion of global emissions, namely 0.018% (or 18 thousandths of 1%; see Figure 1). Moreover, the Premier of Quebec said recently that even this target would probably not be met.(4) 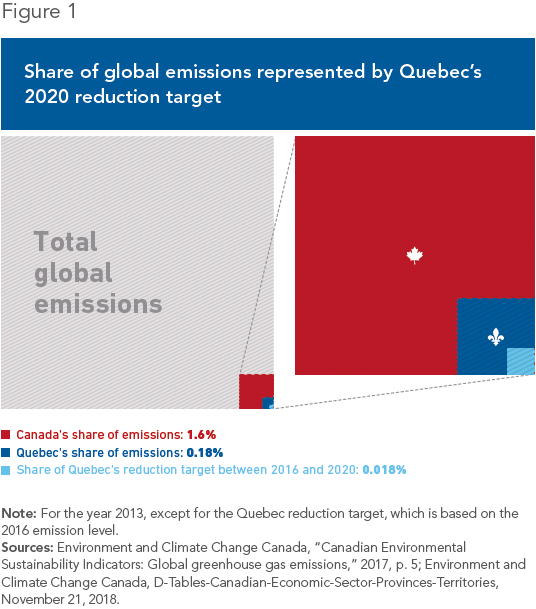 Meeting the Quebec target would also be cancelled out very quickly by the biggest polluter on the planet: China. Between 2005 and 2013, Chinese GHG emissions increased by 559 million tonnes of CO2 equivalent (MtCO2e) each year. In comparison, Quebec’s total reduction target is 17.3 MtCO2e for the period from 1990 to 2020.(5) In other words, due to the significant growth of its emissions, China cancels out all of Quebec’s 30-year reduction objectives in just eleven and a half days.(6)

None of this means that Quebec can’t make significant progress and even be the Canadian champion in certain regards. For example, Quebec has the lowest emissions per person in Canada, with just 9.3 tonnes per capita, compared to 19.4 tonnes per capita for the country as a whole. Quebec also experienced the second-largest drop in per capita GHG emissions between 1990 and 2016, a 25% decrease, behind only Ontario (-34%).(7)

The picture is comparable when we measure quantity of emissions as a function of GDP. For each million dollars generated by the Quebec economy, 207 tonnes of GHGs were emitted into the atmosphere in 2016. Canada’s figure was twice as high, and Alberta’s was four times as high. Since 1990, GHG emissions as a proportion of GDP have fallen by 45% in Quebec. (A similar trend is evident in all the provinces except Saskatchewan, where this ratio has remained stable.)(8)

Overall, Quebec’s record in terms of GHG emissions is very good compared to the other provinces. The impact of Quebec’s GHG emissions on the global climate is negligible to say the least; if we look specifically at the impact of the expected reductions by 2020, it is practically non-existent.

What can Quebec do to contribute to the environmental effort? A first step would be to stop putting forward public policies that are ineffective, or downright harmful. For example, by subsidizing the McInnis Cement plant, the Quebec government helped create the biggest GHG emitter in the province.(9) There are subsidies for the purchase of electric vehicles, which cost nearly $300 per tonne of GHGs not emitted.(10) There is also the Green Fund, which reduces emissions at a cost of over $2,000 per tonne. (By way of comparison, the price of carbon on the carbon market is currently around $20, and the federal tax will reach a peak of $50 per tonne in 2022.)(11)

The rest will depend on the energy transition, which is well underway. That being said, it will only really be achieved when it is accompanied by a technological transition. These transitions take time. For example, coal, which we started using in a significant way in the middle of the 19th century, reached its peak in the global energy mix only around 1900 (around 50% of the total), when oil had already started to replace it. Over a hundred years later, coal still has not disappeared, and serves to produce around 25% of primary energy.(12) The same phenomenon is at work for oil. The advent of new technologies that emit less GHGs is inevitable, but will take a certain amount of time.

In sum, Quebec can make laudable efforts to reduce its CO2 emissions, but it is illusory to think that this will have a significant impact. The real solution lies above all in technological innovation.