Earlier this year, the Quebec government formed a committee whose stated goal was to propose a soda tax, for the purpose of reducing the prevalence of obesity. Yet there are numerous reasons to question the effectiveness of this measure. Indeed, when a tax modifies the price of a good, there is no guarantee that the replacement product will be better for one’s health than the taxed product.

This Viewpoint was prepared by Mathieu Bédard, Economist at the MEI. The MEI’s Taxation Series aims to shine a light on the fiscal policies of governments and to study their effect on economic growth and the standard of living of citizens.

Earlier this year, the Quebec government formed a committee whose stated goal was to propose a soda tax, for the purpose of reducing the prevalence of obesity.(1) Yet there are numerous reasons to question the effectiveness of this measure. Indeed, when a tax modifies the price of a good, there is no guarantee that the replacement product will be better for one’s health than the taxed product.

The Paradox of Sugar

Sugar is not the cause of rising rates of obesity.(2) In fact, a “sugar paradox” can be observed in Quebec and in the rest of Canada, as well as in the United States, the United Kingdom, and Australia, among others. In all of these places, there has been an increase in obesity in recent years, despite the fact that sugar consumption is down.(3)

A recent study shows, for example, that despite the increased prevalence of obesity, Quebecers and other Canadians consume fewer and fewer sugary drinks, and those they do consume contain less and less sugar.(4) The consumption of sugar in general has also fallen over the past ten years, after having risen almost constantly since the early 1990s. Despite this, the obesity “epidemic” has maintained its momentum, and today affects nearly a third of the country’s population (see Figure 1). 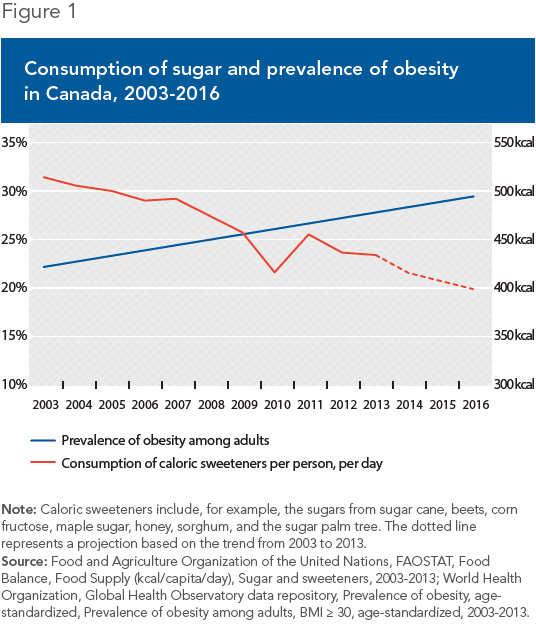 The same phenomenon can be observed elsewhere. In the United States, the consumption of sugar and its equivalents (including the high-fructose corn syrup used in soft drinks) has fallen since the late 1990s, contrary to popular belief. The obesity rate, though, keeps rising.(5) In Aus-tralia, where this connection has been widely commented on, the increase in the prevalence of obesity has coincided with a substantial drop in sugar consumption.(6)

The Problem Is Calories

Numerous clinical studies have demonstrated that there is nothing special about sugar in itself that would slow down or cancel out weight loss while dieting.(7) As nutritional science explains, it is the overconsumption of calories, whatever their origin, that leads to weight gain, whether one eats whole foods, processed foods, or sugary drinks. This is an important point, as it is thus technically possible to lose weight while consuming sugary foods and drinks almost exclusively.

Focusing on a single type of food or a single nutrient to deal with the problem of obesity is doomed to failure.(8) This is a case of the economic principle of unintended consequences, as illustrated in the United States when Oregon banned chocolate milk from elementary school cafeterias. A study found that less milk was thus sold, that more of the milk sold was wasted, and that many students stopped buying meals at school.(9) The net result was that less milk was consumed and, the researchers suspect, this was compensated for at snack time or after school with foods or drinks that were just as calorific.

The problem with taxing food that is too sweet, too salty, or too fatty is the same as for all taxation. When you tax a product, behaviours change, and people substitute their consumption of one good for that of another.(10) The effect of a hypothetical tax on the prevalence of obesity will depend, though, on what replaces sugary drinks.

If, despite the tax, people continue to consume too many calories, this public policy will have no effect. It will nonetheless have increased the prices of products, which is particularly pernicious for the less well-off. And if the total consumption of sugar is relatively or completely unaffected, it’s even worse, since such a policy can then not even claim to improve public health. On the contrary, it might actually undermine it. This would be the case if, due to the tax, people sacrificed a portion of their healthy consumption of milk, for example, or of fruits and vegetables, in order to maintain their consumption of sugary drinks.

The same problem would arise if it were a question of taxing processed foods, which are also sometimes accused of being responsible for the increase in obesity. For example, one study found that processed foods contained 55% of the dietary fibre in the diets of Americans, as well as 48% of their calcium intake, 43% of their potassium, 34% of their vitamin D, 64% of their iron, 65% of their folic acid, and 46% of their vitamin B-12.(11) If a tax led Americans to replace processed foods in their diets, there is no guarantee that what would replace them would be as rich in these nutrients, or less calorific for that matter. In sum, such a tax could well have a negative effect on their diets.

Nutrition, and consumption more generally, is more complex than we think. If we were to try to modify Quebecers’ food-related behaviours using taxes, it would be impossible to know with certainty what they would shift their consumption to. Simplistic solutions like taxing sugary drinks do not address more basic problems, like adequate education about good nutrition and a healthy lifestyle, for which a tax is no substitute.