In recent years, numerous national energy projects have been cancelled or substantially delayed in Canada due to the ineffectiveness of the governmental approval process. This situation is alarming, given the contribution of the energy sector to the Canadian economy, but also our loss of competitiveness relative to our main trading partner. Indeed, the United States has put in place a series of reforms aimed at reducing the regulatory burden for businesses, while here, we are heading in the opposite direction.

This Economic Note was prepared by Alexandre Moreau, Public Policy Analyst at the MEI, with the collaboration of Germain Belzile, Senior Associate Researcher at the MEI. The MEI’s Energy Series aims to examine the economic impact of the development of various energy sources and to challenge the myths and unrealistic proposals related to this important field of activity.

In recent years, numerous national energy projects have been cancelled or substantially delayed in Canada due to the ineffectiveness of the governmental approval process. This situation is alarming, given the contribution of the energy sector to the Canadian economy, but also our loss of competitiveness relative to our main trading partner. Indeed, the United States has put in place a series of reforms aimed at reducing the regulatory burden for businesses, while here, we are heading in the opposite direction.(1)

The economic activity of the Canadian energy sector represented $172 billion in 2017, or around 10% of the Canadian economy as a whole. Oil and gas extraction accounts for more than two thirds of this.(2) It is therefore an important source of jobs and investment that directly and indirectly supports a multitude of businesses and communities.

The extraction, transformation, and transport of energy resources moreover require colossal infrastructure, and therefore substantial investments. In 2017, the energy sector accounted for a third of the country’s capital expenditures.(3) In all, this sector provides employment to over 240,000 Canadians.(4)

Despite the importance of the energy sector in the Canadian economy, some recent failures raise important doubts about the effectiveness of the approval process for large projects that extend across provincial borders. For example, the National Energy Board (NEB) had approved the Trans Mountain pipeline expansion linking Alberta with the coast of British Columbia, subject to 157 conditions.(5) The resistance of certain groups and politicians nonetheless stretched out the process and generated no less than 17 legal battles, all decided in favour of the project.(6)

To get beyond the impasse, the federal government decided to buy the pipeline in May 2018.(7) This has not been enough to move the project forward, however, since a subsequent loss in the Federal Court of Appeal has invalidated its approval. This decision could add an additional delay of up to 24 months, on top of the 77 months that have already passed since the initial filing,(8) or more than eight years in all (see Figure 1). 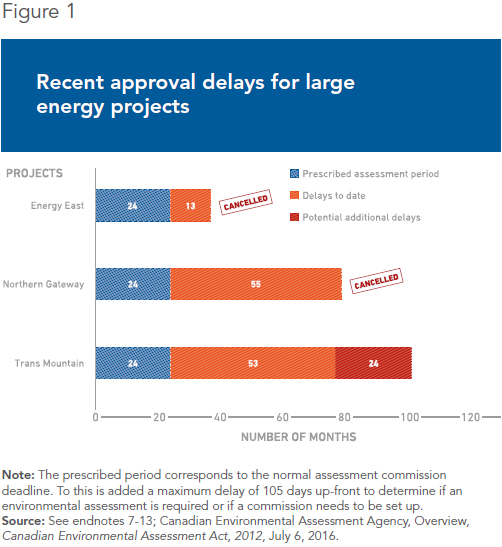 Political decisions that disregard the recommendations of independent governmental agencies also complicate the approval process, as in the case of Northern Gateway. This project was proposed in May 2010. A positive decision was handed down by the NEB after three years of analysis (subject to 209 conditions), and Ottawa gave its approval a year later, in 2014. The Federal Court of Appeal overturned this decision in June 2016, and the current government finally rejected the project following a new assessment that November.(9) These multiple reversals thus took place over 79 months.

Sometimes, regulatory requirements impose such high costs that they can lead to the abandonment of a project. A request was filed with the NEB in October 2014 for the construction of the Energy East pipeline, with an estimated value of nearly $16 billion. In an attempt to win over critics, the government modified the NEB’s mandate to include, among other things, the obligation to consider upstream and downstream CO2 emissions.(10) This changing of the rules of the game, which introduced additional costs and constraints at a time when prices had fallen, led TransCanada to abandon the project, 37 months after its filing.(11)​

These recent failures, among others,(12) have reduced the economic opportunities of Canadians, in addition to highlighting a context that is bad for investment. An entrepreneur must obviously take several factors into account before investing in a large project, including taxation, the labour force, market access, respect for property rights, and access to resources.

The regulatory context is a particularly important factor insofar as a long and unpredictable approval process discourages investment by increasing uncertainty and expenses. Responding to regulatory requirements that can change at any moment inevitably leads to an increase in administrative and labour costs. To this is also added opportunity costs that are difficult to assess, stemming from income losses due to the fact that the company must wait much longer before a project is operational.

The data collected in the Fraser Institute’s Global Petroleum Survey also show that a long and unpredictable regulatory process discourages investment. This places the main petroleum producing provinces in a difficult situation compared to their American competitors in terms of approval process delays and predictability.

Indeed, British Columbia and Alberta are the places in North America where the administrative burden is the heaviest according to investors, except for California. Over two thirds of companies polled expresses a reticence to invest in these two provinces because of regulatory uncertainty (see Figure 2).

Excessively long and unpredictable delays obviously have the effect of imposing additional costs on companies. The two same Canadian provinces rank poorly in this regard as well, giving rise to the same reticence on behalf of investors.(13)

Yet it is in British Columbia and in Alberta that the vast majority of Canadian oil and gas is extracted.(14) South of the border, states where the regulatory climate is very favourable to investment, like Texas, West Virginia, North Dakota, and Oklahoma, account for half of U.S. oil production.(15)

Canada and the United States, Opposite Trends

In Canada, public protests against energy projects have led the government to review the entire approval process for large projects with the tabling of Bill C-69, which will among other things create the Canadian Energy Regulator, to replace the NEB.(16) In its current form, several elements indicate that the new provisions would have the effect of further lengthening and complicating the approval process for energy projects.

For one thing, the minister will have to take into account certain particular factors in making a decision, including “alternatives” to the project and “the intersection of sex and gender with other identity factors.”(17) According to Osler, a business law firm, “These factors make the role of an impact assessment more of a policy-setting exercise than focused on the merits of a specific project, which is likely to increase the scope of studies that proponents will need to engage in and contribute to overall project uncertainty.”(18)

It goes without saying that a minimum of regulation is desirable to ensure the protection of the environment, and that consulting third parties affected by a large project is indispensable. But the addition of a multitude of basically subjective considerations in the hands of an adjudicative agency carries a high risk of complicating the process. While the stated objectives of the bill may be laudable, it is far from clear that the environmental assessment process of an energy project is the best platform for analyzing these other issues.

For another thing, although the bill somewhat reduces the number of days allocated for the approval of projects, it adds a preapproval process, which involves 180 days of public consultations.(19) For the Northern Rose Fulbright law firm, the bill “risks keeping or extending the same timelines.”(20)

Thus, several provisions grant a great deal of latitude to the minister, who can suspend, prolong, or cancel the whole process during the planning of work and project evaluation, according to his or her interpretation of the situation. For example, after having examined the conclusions of the assessment report, the minister must judge whether the impacts of the project are in the “public interest,” and can thus impose additional conditions onto the developer as well as a monitoring plan.(21) Finally, the minister will still have the power to refuse a project that had been approved, but the reverse will no longer be possible.(22)

At the same time, south of the border, the approval process for energy projects has been simplified. Among other things, certain infrastructure projects deemed to be priorities by the executive branch are subject to an expedited approval process.(23)

Furthermore, two laws currently being studied by the U.S. Senate aim to simplify the approval of projects involving trade in oil, natural gas, and electricity between states, but also with Canada and Mexico.(24) The approval process would be depoliticized, since the decision would come from an independent federal agency, namely the Federal Energy Regulatory Commission (FERC), and not from the State Department and the president, as it is now. The FERC would have to grant a permit for cross-border projects within 120 days, and within just 30 in the case of natural gas imports and exports. The project’s public interest and respect for existing policies and standards must have been demonstrated previously, otherwise the project would not go forward.(25)

To further accelerate the approval of infrastructure projects and avoid repetition, the White House has established the “one agency, one decision” principle through an executive order. It is now no longer necessary to obtain a multitude of permits from several agencies; the process is centralized in the hands of a single one that is responsible for coordinating the process with the agencies having expertise that is relevant to the assessment of the project. Moreover, these must follow up on their performance in terms of costs, delays, and respect for the rules that are in place.

Agencies will thus be graded and poor performance or missed deadlines will be sanctioned with financial penalties deducted from their respective budgets. The environmental assessment of large development projects would thus have to be completed within a maximum of two years. In the event of a positive response, the agency in charge would subsequently have to grant a permit within the following 90 days.(26)

The investment slowdown of recent years in the Canadian energy sector is doubtlessly related to the already unfavourable conditions on our side of the border; a heavier regulatory burden would only exacerbate the problem.(27) Yet such an exodus of investments is not inevitable. Governments can reduce uncertainty and the associated costs.

The preamble to the part of Bill C-69 that deals with impact assessment states that “the Government of Canada recognizes that a transparent, efficient and timely decision-making process contributes to a positive investment climate in Canada.”(28) In order for this objective to be achieved, the bill should be amended to include the following elements:

When the government wants to ensure that individuals and companies follow the rules and respect the law, it does not hesitate to put incentives in place, including penalties. The same logic should apply to the government when it does not respect its own deadlines and regulations.

Canada can become again the welcoming place it used to be for investors. It’s just a matter of taking the necessary steps.