In December 2017, President Donald Trump cut corporate tax rates from 35% to 21%, effective immediately. While certain critics quickly lamented this policy decision, the President is currently mulling a second round of tax cuts. In this context, the Canadian experience with corporate tax reduction provides a useful comparison.

This Economic Note was prepared by Mathieu Bédard, Economist at the MEI, and Adam Michel, Policy Analyst in the Thomas A. Roe Institute for Economic Policy Studies at The Heritage Foundation. The MEI’s Taxation Series aims to shine a light on the fiscal policies of governments and to study their effect on economic growth and the standard of living of citizens.

One of the most underappreciated Canadian economic success stories, and one of the most relevant for an American audience today, is the sustained reduction in the federal corporate income tax rate from 2001 to 2012. Despite the near halving of the rate over this period, fiscal revenues generated by the tax did not diminish. This is due in no small part to the fact that, as expected, the reform led to more business investment and more economic growth, not to mention higher wages.

A similar reform was signed into law by President Donald Trump in December 2017, the major difference being that the entire rate cut, from 35% to 21%, took effect immediately instead of gradually over a period of a dozen years.(1) There is already anecdotal evidence that this change is helping the United States regain a competitive advantage for business investment, and that it is also benefiting American workers.(2) Of course, we will have to wait several years to get a detailed picture of the effects of this tax reduction, but Americans should keep in mind their northern neighbor’s experience as they evaluate this seemingly controversial policy.

In 2000, Jean Chrétien’s Liberal government in Ottawa began lowering the federal corporate tax rate from its long-time plateau of 28%. Through a series of successive reductions, it fell to 21% in 2004. Stephen Harper’s Conservative government, elected in 2006, further lowered the rate until it finally reached 15% in 2012. While this corporate tax rate reduction was the most significant reform, throughout the same period other changes were also implemented, including modifications to capital cost allowances and the harmonization or phasing-out of other taxes that affected capital.

Despite the rate being cut almost in half, Canadian revenues have held up remarkably well since 2001, the first year of the reform, when the initial one-percentage-point cut was implemented. Tax revenues had tumbled to $32.3 billion (all figures are in constant 2017 Canadian dollars) from an inflated $43.4 billion the year before, thanks to the bursting of the dotcom bubble in 2000 and the economic downturn that followed. After the ups and downs of the 2008 financial crisis, and the 2014 oil price bust which had a pronounced effect due to the importance of the oil and gas sector in the Canadian economy, revenues were back to $45 billion in 2017 (see Figure 1). 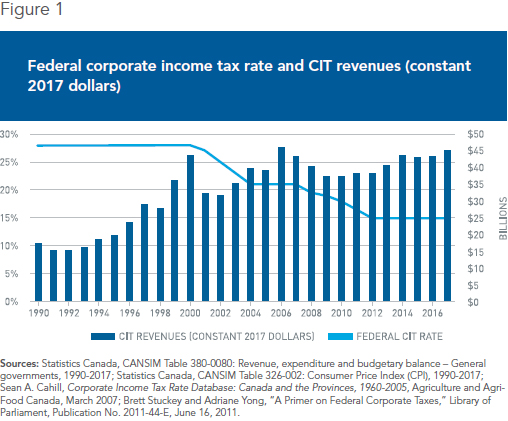 As a consequence, corporate income tax revenues as a share of GDP have remained fairly constant between 3% and 4% after the initial drop in 2001, despite these economic hardships (see Figure 2). This puts to rest the argument that a major reduction in the corporate tax rate necessarily leads to a corresponding drop in revenues and a worsening of the fiscal situation. 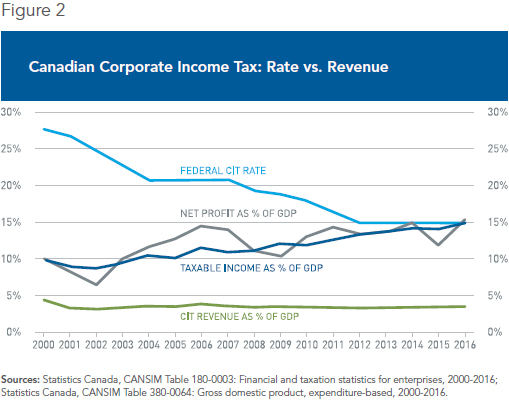 While the Canadian federal government originally taxed over a quarter of the total corporate income “pie,” its current slice is about the same size, despite being only around one seventh of the total pie. This is because the pie has gotten so much bigger.

This economic effect is sometimes referred to as the Laffer effect. American economist Arthur Laffer had suggested that the Reagan tax cuts of the 1980s would not diminish government revenues nearly as much as some were predicting. This is due to the fact that the prevailing tax rates were high enough to discourage some economic activity, and reducing them would therefore spur additional activity, which would then in turn be taxed.(3) He was right about the Reagan tax cuts, as revenues quickly rebounded to their initial level.(4) His insight also applies to the Canadian corporate income tax cut.

One reason corporate income increased to this extent in Canada is that the tax cut stimulated private investment, which picked up after 2000 following a miserable performance in the 1990s.(5) Corporate income taxes reduce the profitability of investments. In other words, raising this tax rate encourages investors to look elsewhere when deciding where to place their funds, or alternatively, to simply forego their plans. Indeed, authorities must deal with tax competition from other countries. Investors increasingly shop all around the world for the most promising projects, and high corporate taxes can push both foreign and domestic investors to look abroad.(6)

As a share of GDP, private investment rose from about 10.5% to 13% of GDP by 2012. This was, of course, partly due to the commodity boom, but it was also partly due to the improved fiscal climate for investment. This improved performance showed up in the majority of sectors, but services benefited the most from the tax reform, since their effective rate decreased the most. (The manufacturing and processing sector used to be favored by a special, lower tax rate, which was phased out in 2004.)(7)

A question that arises in Canadian discussions and that is relevant to the current American policy debate is whether this Laffer effect is attributable to growth, or to income being shifted from other parts of the economy, including multinationals repatriating their profits from foreign operations. It is not easy to provide a definitive answer to this question, but both effects are probably present.

Taxable corporate income, as a share of GDP, has been steadily trending upward even in recessionary years. This is consistent with the idea that profits were being shifted, throughout this period, from the overseas operations of large corporations in order to benefit from the Canadian rate, increasingly competitive throughout the 2000s, especially when compared to the higher U.S. tax rates during the same period.(8)

On the other hand, there is evidence that there was indeed growth during this period. Net profits as a percentage of GDP rose substantially over the 2000-2016 period, despite variations due to economic fluctuations. This is indicative of growth rather than profit shifting as an explanation, and also derives from other factors such as technological progress, which has raised the return on capital.

Canada’s corporate income tax reduction had broad bipartisan support, because it was widely understood that although corporations may be legally responsible for remitting the tax, workers ultimately pay a large share of it. They therefore have the most to gain when it is reduced.

Workers benefit from corporate tax cuts in two ways: through increased investments, which lead to productivity growth and job creation, and through increased returns on their pension funds, retirement accounts, and other investments. Essentially, corporate tax cuts translate into higher wages and more money for retirement. This is confirmed not only by Canada’s experience, but also by international research, including ample evidence from the United States.(9) In fact, research suggests that workers bear most of the corporate tax burden.(10)

Corporate tax cuts attract more investment in buildings and equipment. Investors from abroad are particularly sensitive to these taxes, and shop around for low rates. Since these investments allow workers to be more productive by producing more goods and services more quickly, companies are able to pay higher wages, and often will want to hire even more workers. Research on variations in corporate taxes across Canadian provinces between 1981 and 2014 found that for each additional dollar of tax revenue brought by an increase in the provincial corporate income tax rate, aggregate wages were depressed between $1.52 and $3.85.(11)

The Canadian experience between 2001 and 2012, when the federal corporate tax rate was lowered, corroborates these findings, as Canadian wages did indeed increase faster than they had in the previous decade,(12) and faster than wages did in other industrialized countries during the same period (see Figure 3).(13) In fact, a review of the evolution of Canadian wages shows that while they grew little in most industrial sectors in the 1980s and 1990s, over the first decade of the 21st century “several industrial sectors experienced close to two-digit wage growth.”(14) No doubt, this again is partly attributable to the commodity boom that had a high impact in Canada. But other sectors such as construction, finance, and some service industries also experienced from 9.8% to 15.8% real hourly wage growth, whereas workers employed in occupations unique to manufacturing and processing, as well as utilities, registered more modest wage growth.(15) 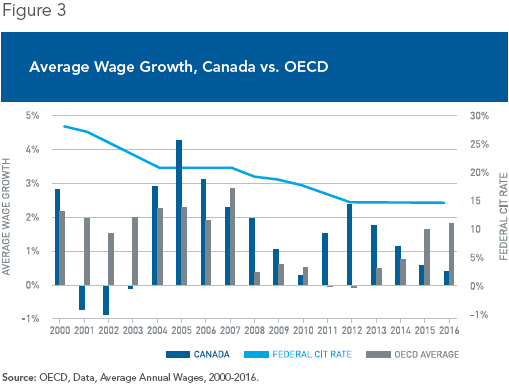 The corporate tax reform that took place in Canada from 2001 to 2012 was largely a success, helping to grow the economy. Investment has improved despite two recessions at the beginning and end of the last decade, and despite the substantial effect of the commodity price bust on Canada in recent years. While leading to more investment and higher wages, it also provided steady levels of government revenues. There is every reason to believe that American workers, businesses, and the federal government will enjoy the same kinds of benefits.