A carbon market, like a carbon tax, aims to modify behaviours in order to reduce GHG emissions by setting a price for them. Although such mechanisms are regularly mentioned in the news, their economic consequences are less often discussed, to say nothing of their effectiveness. Does imposing a price on carbon always reduce emissions, or does it instead displace them, along with the accompanying economic activity? In the two scenarios examined here, the effect on GHG emissions would be negligible, but the economic impact would be significant.

This Economic Note was prepared by Germain Belzile, Senior Associate Researcher at the MEI, and Mark Milke, independent policy analyst. The MEI’s Energy Series aims to examine the economic impact of the development of various energy sources and to challenge the myths and unrealistic proposals related to this important field of activity.

Quebec, Ontario, and California are the three members of the Western Climate Initiative (WCI), which aims to reduce greenhouse gas (GHG) emissions. One of its major tools is the greenhouse gas cap-and-trade system, also known as a carbon market or exchange.(1) According to the agreement, companies located in these three jurisdictions will either have to reduce their GHG emissions or purchase emission credits on the carbon market.

A carbon market, like a carbon tax, aims to modify behaviours in order to reduce GHG emissions by setting a price for them. Although such mechanisms are regularly mentioned in the news, their economic consequences are less often discussed, to say nothing of their effectiveness. Does imposing a price on carbon always reduce emissions, or does it instead displace them, along with the accompanying economic activity? In the two scenarios examined here, the effect on GHG emissions would be negligible, but the economic impact would be significant.

Between 1990 and 2015, Quebec and Ontario reduced their GHG emissions by just over 9%. In California, emissions increased by 0.7% over the same period. Yet the GHG emission reduction goals of the WCI partners are ambitious: between 37% and 40% by 2030 and 80% by 2050.(2) None of the three sub-national jurisdictions is on course to hit these targets.

Two major obstacles to reaching these objectives are often overlooked. First, two sectors (agriculture and waste management) are excluded from the cap-and-trade scheme and do not need to reduce their emissions.(3) The other sectors will therefore have to do more. Quebec’s overall GHG reduction objective thus increases to 45% by 2030 and to 96% by 2050 for the sectors subject to cap-and-trade, if the excluded sectors continue to emit at a constant level.(4) In other words, the targeted sectors will have to be practically decarbonized within the next 30 years.

Second, companies subject to international competition will continue to receive free emission credits under cap-and-trade for quite some time. These companies will thus be exempt from making an effort to reduce their emissions.(5) Once again, this means even greater efforts required from other companies. The existing targets therefore seem extremely ambitious (see Figure 1). 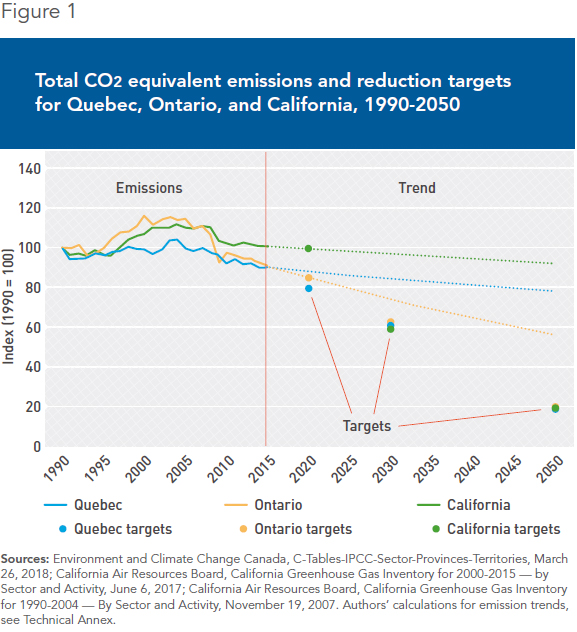 How Can the Targets Be Reached?

Under what conditions could the cap-and-trade reduction objectives be met?(6) Let’s start with the transportation sector. Two important meta-studies conclude that the price elasticity of demand for gasoline is around -0.6 over the long term.(7) To reduce the quantity consumed by 37% to 40% depending on the province or state (the 2030 target), the price of fuel would have to increase by 62% to 67%.

It would actually have to increase even more, as there is a natural tendency for consumption to rise with a stable price, despite the improved energy efficiency of vehicles, since their number and their size continues to grow.(8) For example, if the price of a litre of gasoline is $1.40, a 62% increase will raise it to $2.27. This means an increase of $0.87 per litre due to the price of emission credits, or $368 per tonne of CO2, far above current or projected levels on the carbon market.(9)

In the residential sector in Quebec, even though the historically low price of electricity gives citizens little incentive to invest in energy efficiency, nearly all possible GHG emission reductions have already been achieved, since the vast majority of residences are heated and cooled with hydroelectricity.(10) In Ontario, on the other hand, there are still gains to be made given that oil and natural gas are still largely used for heating, but this doesn’t mean that the targets will be easy to hit. Given the low elasticity of demand for these forms of energy, an even higher tax than what applies to gasoline will be needed to meet the reduction goals.(11)

In the industrial sector, efficiency gains and emission reductions are possible. However, the more we look for additional gains, the higher the cost of those gains will be.

It is therefore unrealistic to think that green technologies will be widely adopted unless the price of carbon climbs significantly or those technologies become more affordable. In sum, we cannot expect emission reductions in Quebec or in Ontario that would allow the 2030 objectives to be met based on the current parameters and the expected evolution of prices, which should be between $30 and $104 per tonne of CO2 in 2030 (see Figure 2).(12) 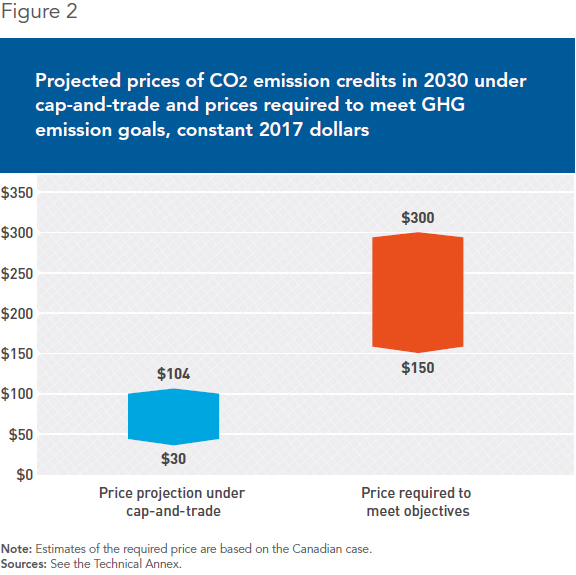 This conclusion is confirmed by numerous studies,(13) as well as by an Environment Canada report, which notes that reaching Canada’s targets would require the price of carbon to reach $100 by 2020 and climb to between $200 and $300 by 2050.(14) Another estimate, from the Quebec Finance Department, predicts that with a carbon price of $93 in 2030, only one-fifth of the desired reduction will be achieved.(15)

In a first scenario, the price of carbon under cap-and-trade would remain within the current range of forecasts, namely between $30 and $104. Unless there is extraordinary and very rapid progress in green technologies, there would be little reduction of emissions in Quebec or Ontario. Logically, sufficient quantities of emission credits would need to be available to avoid upward pressure on the carbon market price.(17) This would be the case if very substantial GHG reductions in California lead to the availability of surplus credits, or if the California government continues to hand out free credits in large quantities. This latter hypothesis is increasingly likely.(18)

In such a situation, Quebec and Ontario companies would make massive purchases of emission credits, which would cost them a lot less than modifying their production methods. Behaviours would be relatively unaffected because of the modest increase in the price of carbon. Politicians could claim victory, since emissions would theoretically be going down in the territory covered by the WCI, but there would be very little reduction of emissions on the Canadian side.

In practice, the cap-and-trade system would instead give rise to a transfer of funds from Canada to California. If the two Canadian provinces made up the difference between the projections and targets for 2030 by purchasing California’s surplus credits, Quebec would be sending between $460 million and $1.6 billion to that state, and Ontario between $470 million and $1.6 billion. Overall, the bill for the two Canadian provinces would be in the range of $930 million to $3.2 billion in 2030.(19) These estimates are close to those made by the Auditor General of Ontario, who forecasts capital flight of $470 million in 2020 and up to $2.2 billion in 2030 for Ontario alone.(20) These substantial amounts of money would be sent to California in order to maintain a clear conscience in terms of climate without reducing emissions in Canada.

In a second scenario, the three WCI signatories would actually do what they announced in 2013: They would substantially reduce the number of available emission credits and would eliminate free credits well before 2030. The price of carbon would thus climb to a high level, compatible with a significant modification of behaviour. In this case, it is carbon leakage that would occur.

Indeed, when the price of carbon makes companies less competitive, this leads them to reduce production, to shut down, or to move, or again to transfer a portion of their activities to places with friendlier conditions. This possibility, which echoes the concerns of many companies,(21) was foreseen by the governments involved in the cap-and-trade scheme from its inception. The solution was to exempt certain industries from having to purchase credits or to hand out free credits.(22)

Numerous studies have tried to measure the economic impact of taxing carbon in various contexts.(23) They conclude that this impact essentially depends on two variables: Is this policy unilateral or not, and what is the size of the tax?

In theory, if all the countries of a large region adopt similar carbon tax policies, the effects on employment and production in a given country are less significant than if some neighbouring countries opt out. Moreover, if the carbon tax is low, the impact on production and employment is weak. However, if the carbon tax is high and it is adopted unilaterally, the effects on production and employment will be far more substantial.(24) It is precisely in this latter case that “carbon leakage” is exacerbated, and this applies perfectly to the WCI: a small number of sub-national jurisdictions in North America impose a price on carbon, contrary to the majority of their neighbours.

But would this second scenario, in which large sacrifices are made, at least lead to a reduction in overall CO2 emissions? To answer this question, we need to look at what happens to GHG emissions if industries set up shop elsewhere.

Here again, there are two possibilities: If industries outside the WCI territory have emissions records similar to those under the WCI, overall emissions will remain stable and there will be no large global gain for the economic pain. However, if production moves to a place where regulations are less restrictive, or where technologies are less efficient, emissions will increase. In this case, Quebec and Ontario could lose jobs and investment and actually make global emissions worse.(25)

An increase in the price of carbon in Quebec and Ontario to a level projected by experts under current policies would not enable the GHG reduction targets to be hit and would lead to a substantial transfer of funds, or capital flight, to California. On the other hand, if the carbon price did reach a high enough level to change behaviour in Quebec and Ontario, it would lead to a displacement of production abroad, known as carbon leakage.

For a mechanism like the carbon market to succeed in reducing GHG emissions, carbon taxation cannot be limited to three jurisdictions that account for only a small portion of the North American economy. This is not the way forward in the short or medium term, and it raises questions about the pertinence of taking part in the carbon market.

If the goal of the governments of Quebec and Ontario is to address the problems caused by climate change, then they should take a global approach, not a local one. The current, local WCI approach leads to a choice between bad and worse. It’s not by sending capital or jobs abroad that Quebec and Ontario are going to reduce GHG emissions.