Quebec’s Health Minister announced a reduction in the number of medical school admissions last year in order to keep doctors from ending up unemployed in the future. And yet, one in five Quebecers still does not have a family doctor, and proportionally, Quebec has fewer doctors than most industrialized countries. Is this government control over access to medical training the best way to meet Quebecers’ health care needs?

Quebec’s Health Minister announced a reduction in the number of medical school admissions last year in order to keep doctors from ending up unemployed in the future.(1) In Quebec, it is the government that decides how many medical students universities can admit for the next three years.(2)

And yet, one in five Quebecers still does not have a family doctor,(3) and proportionally, Quebec has fewer doctors than most industrialized countries. Is this government control over access to medical training the best way to meet Quebecers’ health care needs?​

“Too Many” Doctors? Not Really

According to the Canadian Institute for Health Information, Quebec had 2.43 doctors per 1,000 inhabitants, which is slightly higher than the Canadian average (2.3). Nova Scotia (2.58) is the province with the most doctors, while Saskatchewan (1.97) is the one with the fewest. Quebec has somewhat more doctors than Ontario (2.2), and just barely more than British Columbia (2.42) and Alberta (2.41).(7)

The picture looks quite different when we compare Quebec’s medical workforce with that of other industrialized countries. By using the OECD’s definition of “practising doctors,” which includes residents but excludes physicians who have no direct contact with patients, we observe that Quebec has 2.8 doctors per 1,000 inhabitants, which is less than most industrialized countries (see Figure 1). 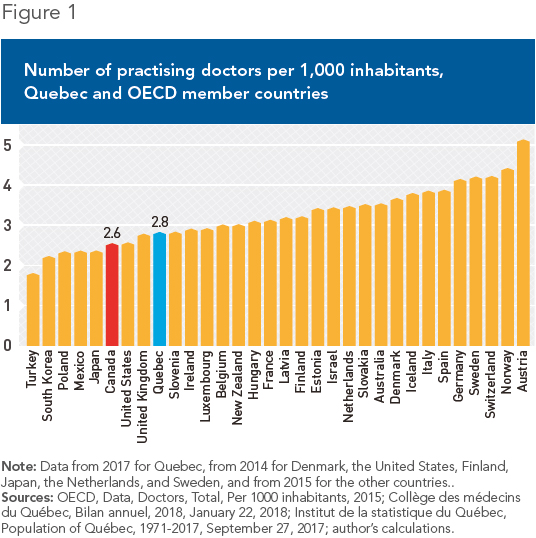 In this comparison of some thirty countries, only Turkey, South Korea, Poland, Mexico, Japan, and the United States have proportionally fewer doctors than Quebec. The United Kingdom has almost as many, but since the number of graduates in medicine is higher, it is only a matter of time before it moves ahead.(8)

Still according to the OECD’s criteria, Quebec currently has around 23,605 practising physicians.(9) If it had the same ratio as Australia, namely 3.5 doctors per 1,000 inhabitants, it would have around 6,000 doctors more, some 11,000 more if it had as many as Germany (4.1), and nearly 20,000 more if it had as many as Austria (5.1). It is easy to imagine that the problem of access to health care would not be as acute if this were the case.

Increasing the number of doctors would be beneficial in several ways. First, the public system would have a larger workforce from which to fill vacant positions, which currently number in the hundreds.(10) Access and patient choice would increase correspondingly. Also, this would allow unaffiliated private clinics to develop without any risk (real or perceived) of them cannibalizing the public system. The growing demand for care and the chronic inability of the public system to satisfy it are business opportunities for entrepreneurs. For example, one doctor already owns seven private clinics and plans to have between 25 and 50 within five years.(11)

Thus, if the government continues to ration care and limit access as it does at present, new doctors will have the option of working outside the public system and continuing to increase the overall supply of care, without affecting the supply in the public sector. This is indeed what Quebecers want.(12) More competition in the supply of care will only be beneficial for patients.

Oxygen to the System

For years, the Quebec Health Department has tried unsuccessfully to predict the needs of Quebecers by calculating, ten years ahead of time, the number of doctors that will be required to meet those needs. This exercise rests on the premise that an all-powerful central authority can possess all the necessary information about the future intentions of millions of patients and tens of thousands of health professionals. The experience of the past thirty years shows that this is a fantasy.(13)

Concretely, year after year, the government just ends up having too few doctors and making patients wait. Doing away with artificial and arbitrary medical school enrolment quotas and allowing all those with the ability to study medicine to do so would inject a much-needed supply of oxygen into Quebec’s health care system. It could then evolve in response to the needs of patients, instead of according to the dictates of bureaucrats and politicians.