In November 2017, Quebec announced a $1.1-billion personal income tax reduction. Some argued then that the reason the government could afford to reduce the tax burden was that it had reduced spending on health and education, and that these sectors had been starved by years of successive cuts. However, both health care spending and education spending have increased considerably in recent years, funded by repeated tax increases. Moreover, these additional sums have had little impact on the quality or the accessibility of public services.

Media release: Health care and education: It’s not about the money

This Viewpoint was prepared by Germain Belzile, Senior Associate Researcher at the MEI, and Patrick Déry, Public Policy Analyst at the MEI. The MEI’s Taxation Series aims to shine a light on the fiscal policies of governments and to study their effect on economic growth and the standard of living of citizens.

In November 2017, Quebec announced a $1.1-billion personal income tax reduction.(1) Some argued then that the reason the government could afford to reduce the tax burden was that it had reduced spending on health and education, and that these sectors had been starved by years of successive cuts. According to these critics, the money used to lower income taxes should have been reinjected into public services.(2)

However, both health care spending and education spending have increased considerably in recent years, funded by repeated tax increases.(3) Moreover, these additional sums have had little impact on the quality or the accessibility of public services.

From 2008-2009 to 2016-2017, health care spending went from $30.6 billion to $36.4 billion, while education spending (excluding the post-secondary sector) went from $12 billion to $13.4 billion.(4) These increases are expressed in constant 2016 dollars, and so take inflation into account. They show that the resources allocated to these two sectors actually did increase in real terms. 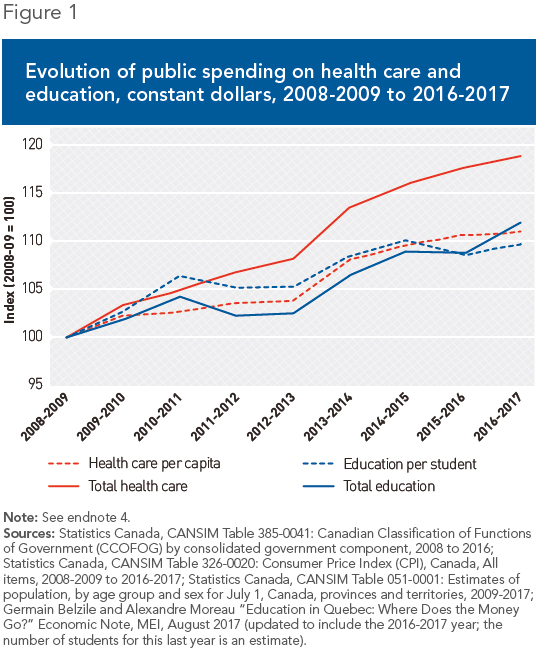 In sum, if spending had simply followed the rates of inflation and demographic change over this period, Quebecers would be paying $4.8 billion less for health care and education today. This is reflected in the share of government spending taken up by these two sectors, which climbed from 65.6% to 67.6% in just three years, from 2013-2014 to 2016-2017.(6) Such a rate of increase is unsustainable in the long term.

If it were true that spending itself has a direct impact on the quality of services, we should have observed a generalized and notable improvement of these in recent years. Yet complaints about the lack of improvement, and even the deterioration of public services, are widespread.

One thing to note is that health care and education budgets increase to fund not just new programs, but also the working conditions negotiated in collective agreements. They are also the result of choices made by the government in the delivery of public services.(7) In education, for example, additional spending in recent years stems primarily from the reduction in the number of students per teacher, payments to pension plans, the automatic progression of teachers up the pay scale, and the growing number of students with special needs. A substantial part of the spending increase therefore has nothing to do with improving the quality of services delivered.(8)

Several commentators have nonetheless concluded that reducing taxes was not urgent because of the crying need observed in public services.(9) Yet it is the organization, the management, and the performance of these sectors that are at issue, much more than their funding.

The scope and the chronic nature of these problems, present in every department, have been documented in a recent study. The author states that “the Department of Education, like many others, measures its success in terms of effort—money spent—rather than results.” The Health Department, for its part, has more appropriate indicators, but it does not achieve better results than the rest. Under current conditions, the study concludes that the injection of additional funds would amount to “an immense waste.”(10)

Indeed, when comparing the results achieved by the educational systems of different countries, the amount spent by government is not always a good indicator of the quality of services. One study of 31 European countries found that the level of public spending had “only a small amount of influence” on the effectiveness of the school system. The level of autonomy of schools has much more of an impact.(11)

In health care, too, performance does not depend on how many billions are spent.(12) The United States is an eloquent example: Although their system is by far the most expensive one in the world, it is regularly ranked last in comparisons of industrialized countries.(13)

Quebec stands out when it comes to health care, having the worst emergency rooms in the Western world according to a report by the province’s Health and Welfare Commissioner. One of the conclusions from another of its publications could be applied to whole swaths of our public services: “The system’s difficulties do not seem to be related to an insufficient budgetary envelope or to a lack of human resources, and even less to a lack of material resources. They instead appear to be related to the organization of care and services and the distribution of financial and human resources.”(14) The Health Department has unfortunately decided to abolish this watchdog that was a source of internal criticism.(15)

Pitting tax cuts against the quality of public services in health care and education is a false dilemma. Over the years, enormous sums have been poured into these two systems, with questionable results at best. Before injecting additional resources, it would behoove the Quebec government to re-examine the way it delivers public services; otherwise, there is no reason to believe that it will obtain different results. In the meantime, there is no doubt that the money used for tax cuts now finds itself in better hands.