The Canadian federation was founded in 1867 in part to ensure a common, unified market across the country. This ideal is enshrined in Section 121 of the Constitution. Yet while substantial trade does take place between the provinces, the dream of a truly unified market remains elusive. An important case about to be heard by the Supreme Court of Canada, though, may help bring down the barriers the provinces have erected to restrict trade over the years.

This Viewpoint was prepared by Michel Kelly-Gagnon, President and CEO of the MEI, in collaboration with Patrick Déry, Public Policy Analyst at the MEI. The MEI’s Regulation Series aims to examine the often unintended consequences for individuals and businesses of various laws and rules, in contrast with their stated goals.

The Canadian federation was founded in 1867 in part to ensure a common, unified market across the country. This ideal is enshrined in Section 121 of the Constitution, which states: “All articles of the growth, produce, or manufacture of any one of the provinces shall, from and after the union, be admitted free into each of the other provinces.”(1)

Yet while substantial trade does take place between the provinces (see Figure 1), the dream of a truly unified market remains elusive. An important case about to be heard by the Supreme Court of Canada, though, may help bring down the barriers the provinces have erected to restrict trade over the years. 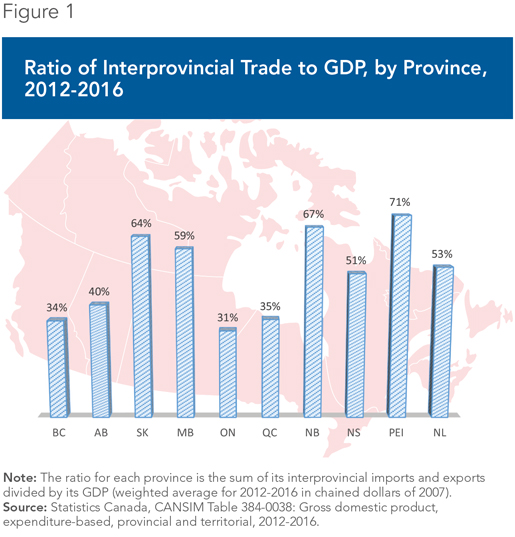 A Few Bottles Too Many

In October 2012, retiree Gerard Comeau of Tracadie was stopped by the RCMP and fined almost $300. His crime? Bringing 14 cases of beer and three bottles of liquor into New Brunswick from Quebec. New Brunswick’s Liquor Control Act limits personal “importation” to 12 pints of beer or one bottle of alcohol or wine.

Mr. Comeau contested the fine, and in April 2016, a provincial court judge threw out the charge against him. The judge concluded that Section 121 of the Constitution was intended to allow the free flow of goods within Canada, and that the New Brunswick law was thus unconstitutional.(2)

When the province’s Court of Appeal declined to review the case, its government turned to the Supreme Court of Canada, which agreed to take a look.(3) The hearing is set for early December 2017.(4)

New Brunswick prosecutors contend that Section 121 of the Constitution prohibits only interprovincial customs duties or tariffs. As counter-intuitive as it may sound, this interpretation, first set out by the Supreme Court in its Prohibition-era Gold Seal decision, has allowed provinces to erect many non-tariff barriers, such as the limits spelled out in the New Brunswick law. But Mr. Comeau’s lawyers argue that this is a long-standing misinterpretation, one they hope the Court will correct.(5)

If the Supreme Court were to reinterpret the Constitution as New Brunswick’s provincial court did, it would present a clear challenge to provincial liquor monopolies—which would be good news for the large majority of Canadians (78%) who think that in the year 2017, they should be allowed to bring any amount of beer or wine they buy in one province into another.(6) But such a ruling should also lead to the liberalization of interprovincial trade more generally, which would be beneficial for all consumers and businesses across the country.

The market for alcoholic beverages is far from the only one to be heavily affected by provincial barriers. A 2016 Senate report provides a dizzying list of examples.(7) For instance, packaging for creamers and milk cups differs by province, and a qualified welder in one province cannot necessarily carry out his work in another province without further training.

Taken individually, each barrier may not account for much, but Canadian economists have calculated that internal trade liberalization could add $50 billion to $130 billion to Canada’s overall GDP.(8) Using a mid-range estimate of $100 billion, these economic gains represent more than $2,700 per Canadian.(9)

Looked at another way, the level of trade between the provinces corresponds to the level that would be expected if a 6.9% tariff were imposed on interprovincial trade, according to Statistics Canada. This shows that from the perspective of economic logic, there is no real difference between a tariff and a regulatory or other barrier. Furthermore, the tariff equivalent effect observed here is nonexistent between American states.(10)

It is true that a new internal-trade deal was signed this past April, and it will hopefully lead to some improvement. The minister who chaired the negotiations spoke of the agreement adding $25 billion a year to the Canadian economy.(11)

Yet this may be overly optimistic, because even though the new agreement will admittedly harmonize rules in the trucking and construction industries, and open government procurement contracts, many obstacles to trade remain, with exemptions making up almost 140 of the deal’s 345 pages.(12) Adding insult to injury, while the various governments of Canada claim to be in favour of reducing interprovincial barriers, they are almost all acting as interveners before the Supreme Court in the Comeau case in order to defend the exact opposite.(13)

One Country, One Market

As the 2016 Senate report argued, the inability of Canadians to work, do business, and trade freely and without penalty across Canada “diminishes us as a country, and makes citizens and businesses more tied to their region than to their nation.”(14) The Comeau case is a golden opportunity to take a big step in righting a long-standing regulatory wrong. This would be, as the report states, the best 150th birthday present Canadians could ask for.