UPDATE 2017-01-18
Certain figures in this Economic Note were updated following the discovery of a calculation error. The text and conclusions of the publication remain unchanged.

This spring, the Quebec government announced additional spending on education. These new expenditures are on top of the substantial increases seen over the past ten years. Is this viable over the long term? Have students benefited from this augmented spending? And are there other solutions that would give taxpayers more for their money?

Media release: Education: Spending has gone up as number of students has gone down

This Economic Note was prepared by Germain Belzile, Senior Associate Researcher at the MEI, and Alexandre Moreau, Public Policy Analyst at the MEI. The MEI’s Education Series aims to explore the extent to which greater institutional autonomy and freedom of choice for students and parents lead to improvements in the quality of educational services.

This spring, the Quebec government announced additional spending on education. These new expenditures are on top of the substantial increases seen over the past ten years. Is this viable over the long term? Have students benefited from this greater spending? And are there other solutions that would give taxpayers more for their money?

Over the past decade, public spending on education from kindergarten through to the end of high school, including vocational training and adult education, grew from $11.3 billion to $12.9 billion in constant dollars, a real increase of 14.1%. However, during this same period, the total number of students in the public sector fell from 1.03 million to 995,000, a decrease of 3.6% (see Figure 1). Real spending per student (i.e., taking inflation into account) therefore grew from $10,984 to $13,003, an increase of 18.4% in ten years.(1) 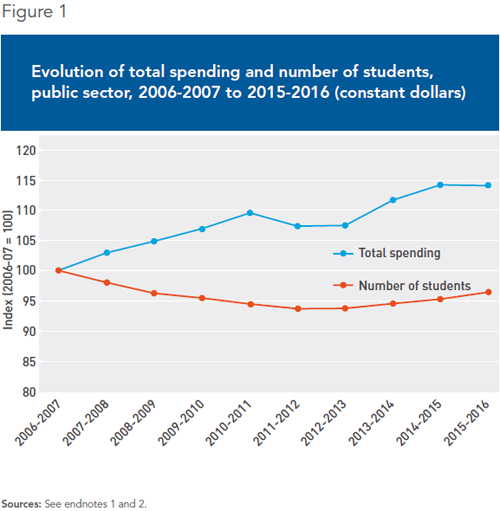 This increase has a considerable effect on Quebec’s public finances, as education is the second largest spending item, after health care. To get a sense of the level of impact, if real spending per student had remained stable over the same period, total government spending would have been $2.3 billion lower in 2015-2016.

Given the announced additional spending in infrastructure and the hiring of personnel as of the fall of 2017,(2) spending per student can be expected to increase even more rapidly in the future.

​Reasons for the Increase

Why has education spending increased so much? One cause can be eliminated right from the start: spending on infrastructure. According to the most recent evaluation, the infrastructure deficit, namely the amount that would have to be spent to renovate the buildings of Quebec school boards—which includes school buildings—exceeds $6 billion. This postponement of normal maintenance spending has therefore actually helped mitigate the Education Department’s spending growth.(3)

We must look instead to salaries in order to understand the surge in costs. First, the student-teacher ratio has gone from 14.2 to 13.3 over the past ten years. This change, which may seem minor, has had a considerable impact on recurring educational costs. A second cause of rising expenditures is related to the government’s employee pension plan payments, which have jumped by nearly 50% over this same period, adjusted for inflation.(4) A third reason is the aging of employees: Since relatively few new teachers are being hired at the moment, the automatic progression up the pay scale over the years increases costs per employee.

Besides salary-related costs, another phenomenon puts substantial upward pressure on education spending: the rapid growth in the proportion of students with social maladjustments, learning disabilities, or handicaps. The percentage of these students in the public sector has gone from 16% in 2006-2007 to 21.5% in 2016-2017, an increase of a third.(5) Given that funding for a student with a handicap is up to four times higher, this factor also contributes to the increase in spending per student.(6)

From the cohort of students starting high school in 2002 to the cohort starting in 2008, the rate of graduation and qualification within 7 years throughout Quebec went from 72% to 79%.(7) Obviously, it is a good thing if our students are more successful, but these numbers need to be put in context.

A non-negligible portion of the improved graduation rate in the public sector is related to the creation of new diplomas, whose value has been called into question by some observers.(8) Take for example the PreWork Training Certificate, which requires a student to follow 2,700 hours of general education training at the secondary level (around three years) and complete a 900-hour Work Skills Education course in a professional setting (in other words, to hold a job). There is also the Training Certificate in the Sociovocational Integration of Adults, awarded to a student who has earned his or her presecondary credits in English, French, and mathematics, and successfully completed 900 hours of labour market integration training.(9) Around 40% of the increase in the graduation rate within seven years across the province is due to this new type of qualification(10) (see Figure 2). 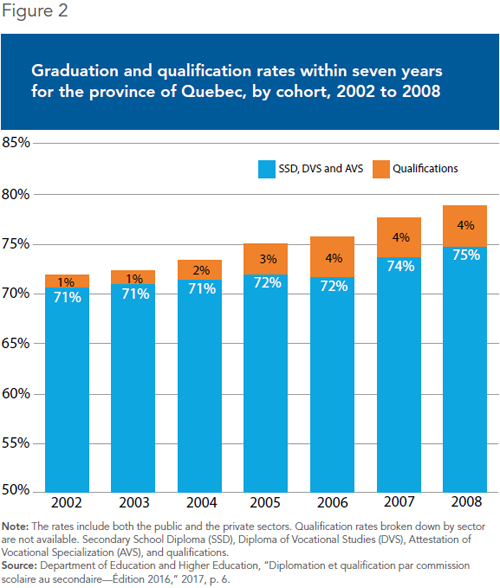 Finally, with the pressure to improve success rates, is a diploma still worth what it used to be worth, or has there been a downward levelling? It is difficult to answer this question, but there is some reason to believe that the desire to graduate more students has led to reduced rigour in their evaluation.(11)

Far from being doomed to inject more and more money into the current educational system without seeing any substantial improvements, it is possible to improve results by changing the way things are done, without it always costing more.

In addition to the Department of Education, another governmental structure is involved in the running of public schools: school boards. These saw the light of day in 1841, when the Department of Education did not exist.(12) Today, most of the tasks carried out by school boards could be entrusted to schools themselves, as can be seen by the way private schools function. In fact, this structure no longer has any reason to exist, and should simply disappear.(13)

Private schools generally perform much better than public schools, which no doubt accounts for the popularity of the former in Quebec. Why not “copy” these schools to a certain extent, and what makes them successful? Charter schools, autonomous institutions financed entirely by government but free to offer the program of their choice, are very popular in numerous American states, in Sweden, and in several other countries.

Research shows that a network of schools competing with the public system helps improve students’ academic success, both among the charter schools and in the public sector as well.(14) Quebec could take inspiration from international experience in this area. Even within the public system, it is possible to introduce some competition by allowing parents to choose the school that best suits their children.

It is also possible to give schools more autonomy. For example, why not let them take care of hiring teachers and choosing pedagogical materials? Once again, this is what happens in the private sector.(15) And why not let teachers on the ground discover and decide what works best for their students? A greater decision-making role can be a significant source of motivation. Furthermore, research shows that teacher engagement and other factors have more impact on academic success than the criteria that often get the most attention in Quebec, like the student-teacher ratio.(16)

Another aspect of the public system as we know it that falls short concerns the valuing of the teaching profession. Teachers have few incentives to provide students with quality teaching or to improve their skills. Job security is almost absolute and the criterion of seniority takes precedence for purposes of promotion. This rigidity has adverse effects. The relative academic weakness of students in education, whose R scores are generally inferior to those of students accepted into other university programs,(17) is an indirect indication that the best university candidates do not see themselves becoming teachers.

Performance-based incentives must therefore be put in place instead of relying so much on seniority, and the firing of incompetent teachers must become a real possibility again.(18) Higher salaries, paid to teachers who have a significant positive impact on the performance of their students, would attract dynamic candidates to teaching and foster emulation as well. Lower salaries for those who underperform could encourage them to change careers. Recall that in Quebec’s 72 school boards, employing a total of 58,000 permanent teachers, only seven of them were fired for incompetence from 2010 to 2015.(19)

The establishment of performance incentives presupposes that teachers will be systematically evaluated. Some school boards do this already, mainly in the English school system. Most teachers in the French system are evaluated when they enter the system, but never again.(20) Yet to reward the good and sanction the mediocre, teacher performance needs to be measured.

What do Quebecers think about such improvements? In a Leger poll published by the MEI in August 2011, 67% of respondents agreed that teacher remuneration should not be based solely on seniority and level of schooling, but should also depend on performance. Furthermore, according to 87% of Quebecers, school administrations should have the power to fire incompetent teachers.(21) Clearly, initiatives designed to create performance incentives and the possibility of firing incompetent teachers would be supported by the general public.

Even though Quebec has taken significant steps in democratizing education in recent decades, there is still a lot of work to do. In terms of literacy, more than half of Quebecers do not have the skills needed “to have good chances of participating fully and productively in today’s knowledge-intensive economies.” Only 11.3% are able to analyze a complex text, identify the arguments therein, and make relevant connections.(22) Barely 59% of Quebecers read a book at least once a month, and 20% never read books.(23)

Moreover, in the public system, more than one student in three does not complete his or her secondary schooling within the normal period of five years.24 In certain school boards, the dropout rate is truly staggering.(25) There is little doubt that a part of the blame falls on the public school system, which underperforms compared to what we should expect in a modern society.

There are few themes that are more important than education in the realm of public policy decisions. Is it not time to have a fresh look at the way we do things? Less bureaucracy, more competition, and greater freedom of choice for parents can all contribute to improving the performance of the educational system, and the future prospects of our children.