This Viewpoint was prepared by Alexandre Moreau, Public Policy Analyst at the MEI. The MEI’s Regulation Series aims to examine the often unintended consequences for individuals and businesses of various laws and rules, in contrast with their stated goals.

The agricultural and agri-food sector represents a substantial part of the Canadian economy, thanks to the fact that Canadian producers and processors can sell their products in the global marketplace.(1) However, this remains foreign ground for the 8% of farms under supply management,(2) a system that makes both exporting and importing practically impossible and that limits production levels to domestic consumption.

In order to justify the continued existence of supply management, producers’ associations state that they could not actually compete on the American market, and that without this system, they would even lose their shares of the domestic market.(3) This Viewpoint aims to show that on the contrary, it is possible for Canadian farmers to be successful on the world market, without benefiting from such protectionist measures.

When a sector is subject to a system of quotas and tariffs, as is the case for dairy products, eggs, and poultry, the level of production is generally equal to just about 100% of domestic production, which varies according to consumers’ habits. Dairy production has thus remained relatively stable since the introduction of supply management in 1971, because despite a growing population, milk consumption per capita keeps decreasing.(4)

Canadian dairy producers are therefore unable to benefit from the increase in global consumption to expand their production.(5) As for dairy processors, the saturation of the Canadian market has pushed them to set up shop outside the country in order to meet the global demand.(6)

In contrast, those sectors not subject to these kinds of constraints can produce much more than the level of domestic consumption. The levels of production of soybeans and wheat, for example, have increased considerably over the past fifteen years, totalling 886% and 666% of domestic consumption in 2016, respectively. This means that for each tonne of soybeans consumed in Canada that year, Canadian farmers produced 8.9 tonnes (see Figure 1). 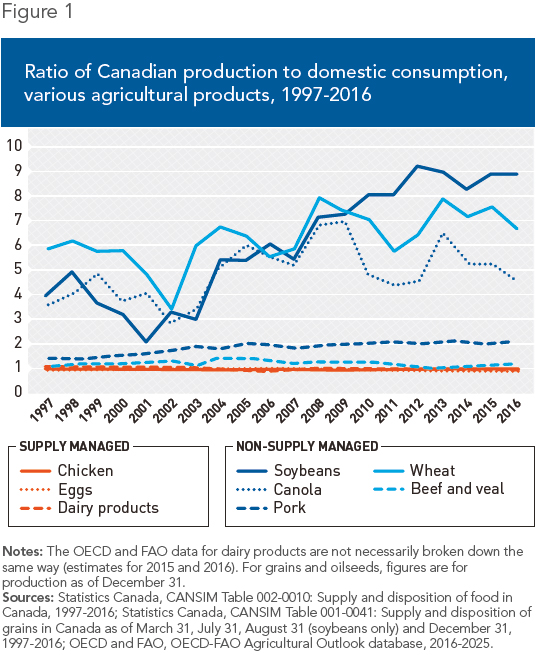 The evolution of the area sown for each type of crop illustrates the adaptive abilities of Canadian producers faced with price and global demand fluctuations. For example, the seeded area of soybean fields has tripled in response to the growth of consumption over the past twenty years.(7)

Faced with international competition, agricultural producers also have strong incentives to innovate in order to reduce their production costs and thus respond to global demand for the highest value-added products. Over the past twenty years, the average yield per acre of canola harvests has almost doubled, whereas for soybeans, oats, and wheat, it has grown by 15%, 52%, and 71% respectively.(8)

This has occurred despite the fact that subsidies and support measures for producers outside of supply management have been considerably reduced and in recent years have represented less than 3% of gross revenues, compared to 43% for milk production.(9)

In 2016, Canada was the 3rd biggest exporter of oilseeds in the world,(10) and 5th in terms of beef and veal.(11) In all, nearly 60% of Canada’s agricultural and agri-food production is destined for foreign markets, more than half of which heads to the American market. This places Canada 5th in the world in terms of exports of agricultural and agri-food products.(12)

The renegotiation of NAFTA should be seen as an opportunity to abolish the supply management system, with financial compensation for dairy, egg, and poultry producers,(13) and to pursue the liberalization of the agricultural and agri-food sector in general.

The time is all the more appropriate for this re-examination given that the possibilities for growth are even more limited for milk producers with the entry into force of the Canada-Europe free trade agreement. In this deal, Canada ceded market shares in order to preserve supply management. Moreover, the limited quantities of dairy product exports allowed by the WTO are contested by Canada’s trading partners, since the export price is lower than the domestic price, which constitutes dumping.(14)

Without access to the world market, the level of production in the Canadian agricultural and agri-food sector would be far lower, and thousands of jobs and billions of dollars in revenues would be lost annually. If 92% of farms manage to succeed without supply management, there’s no reason to believe that most of the others could not do so as well.