For thirty years, the Quebec health care system has experienced multiple systemic problems, especially in terms of long emergency room wait times, and long delays for surgeries as well. Not only has the Health Department been unable to plan the long-term development of the system in such a way as to put an end to these problems once and for all; it also seems unable to allocate resources efficiently when the unexpected occurs. What is so different about the health care sector? And what can be done about it?

This Viewpoint was prepared by Germain Belzile, Senior Associate Researcher, Current Affairs at the MEI, in collaboration with Jasmin Guénette, Vice President of Operations at the MEI. The MEI’s Health Care Series aims to examine the extent to which freedom of choice and private initiative lead to improvements in the quality and efficiency of health care services for all patients.

For thirty years, the Quebec health care system has experienced multiple systemic problems, especially in terms of long emergency room wait times, and long delays for surgeries as well. Not only has the Health Department been unable to plan the long-term development of the system in such a way as to put an end to these problems once and for all; it also seems unable to allocate resources efficiently when the unexpected occurs.

For instance, the early onset of the winter flu season in the year 2000 led to a chaotic situation in emergency rooms. According to the spokesperson of then-Health Minister Pauline Marois, “it’s the first time that an overflow happens during the holidays, when the staff is on vacation. Usually, the flu epidemic begins later.”(1) This year, it’s the arrival of summer that took administrators by surprise. “It’s looking pretty bad just about everywhere. The situation is worse than last year, because the summer hiring has not been authorized.”(2)

One may well wonder how Minister Gaétan Barrette can claim to know the number of doctors that will be required a decade in advance,(3) when his administrators cannot even manage to plan the allocation of human resources for something as predictable as the changing of the seasons.

There have been multiple committees, study groups, injections of additional funds, and structural reforms of Quebec’s health care system in recent decades (see Table 1), without any notable improvement in the situation. The latest reform is Bill 130, which further centralizes decision-making in the hands of the health minister. 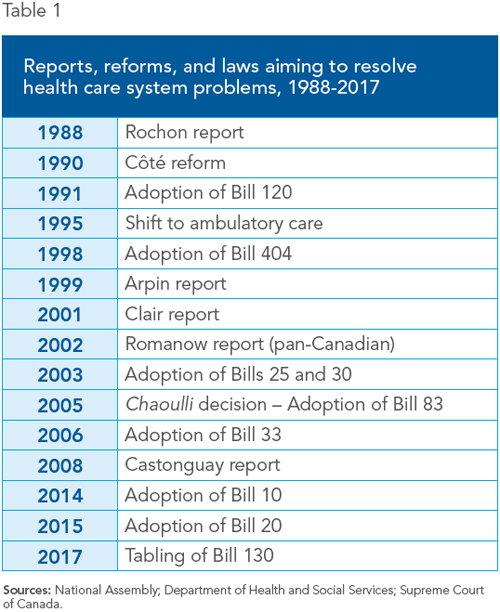 Other sectors of activity, however, do not seem to be saddled with the same recurrent problems. Normally, there are not long wait times to see a dentist, an accountant, or a hairdresser, and most goods and services that we can buy are not in shortage at certain specific times of the year. What, then, is so different about the health care sector? And what can be done about it?

Economists have long known that planning the production of goods and services requires a lot of information, and health care is no exception. For example: What are the characteristics of the population? What illness must be treated most frequently? How many patients find themselves in emergency rooms each week? When the provision of services for eight million Quebecers needs to be planned, the problem quickly becomes a complicated one.

Friedrich Hayek (1899-1992), the 1974 Nobel laureate in economics, can help us to understand these questions. In a 1945 article which has become a classic in economics,(4) Hayek explains that if it were simply a matter of collecting easily available information, the problem of economic coordination could be solved by a large number of calculations carried out by particularly competent administrators. But according to him, the problem is deeper than that.

In the case of a complex, large-scale system, the quantity of information required to make good decisions through centralized planning is extraordinarily high. And importantly, a large portion of this information is not accessible, since it is known only by the millions of individual actors, and even then only as they make decisions and act. As there exists no centralized mechanism for discovering this information, it is impossible for bureaucrats at the head of a vast and complex organization to control everything in an efficient manner.

In contrast to planning, the market allows for an efficient allocation of resources without needing to centralize this information. The innumerable market interactions between individual agents give rise to prices, which are signals that transmit information about the needs and wants of participants, the availability of resources, the values of alternative uses for these, etc. Prices signal to each party what he or she must do to make the most of existing resources, and they produce incentives that ensure effective coordination.

In short, centralized planning requires an omniscient planner if selected objectives are to be achieved, while the market does not need us to know everything, but merely requires actors to react to prices.

How to Reform Our Health Care System

It’s no surprise, then, that health care systems that work better than ours, like Sweden’s system,(5) are generally more decentralized. This decentralization allows actors on the ground, who see the needs of patients and the availability of resources, to make better decisions.

A related measure consists of relying more on market pricing as a coordination mechanism. These prices could emerge in a system based on patient choice and competition between public and private care providers, instead of a public monopoly. Competition itself plays an essential role in the discovery of information, as Hayek also explained.(6)

In order to create incentives that are closer to those that result from a price mechanism, the way hospitals are funded should also be modified, specifically by introducing activity-based funding.(7)

The current method of global budgets does not allow for an efficient allocation of resources and inevitably leads to the rationing of care. A hospital that manages its resources efficiently is actually penalized by a reduction in its subsequent budget. In contrast, activity-based funding encourages hospitals to reduce wasteful spending and to innovate to reduce wait times, thus doing a better job of responding to patients’ needs.

Even in a mixed universal health care system financed for the most part by government, it is possible to steer clear of the main hazards of centralized planning. According to Hayek’s teachings, instead of further centralizing administration to resolve recurring problems, we should do the exact opposite.