The Quebec government is currently studying various ways of ending the SAQ’s monopoly. The Crown corporation has indeed been the target of multiple criticisms over the years, as much for the prices of its products as for its management and efficiency. Another, less frequently heard but nonetheless important criticism is the lack of space the public monopoly leaves for small entrepreneurs. This latter concern should guide the government in its reflections on the liberalization of the alcohol market.

Media release: A large majority of Quebecers support the liberalization of wine sales

Viewpoint – How to Liberalize the Alcohol Market in Quebec

The Quebec government is currently studying various ways of ending the SAQ’s monopoly.(1) The Crown corporation has indeed been the target of multiple criticisms over the years, as much for the prices of its products as for its management and efficiency.(2) Another, less frequently heard but nonetheless important criticism is the lack of space the public monopoly leaves for small entrepreneurs. This latter concern should guide the government in its reflections on the liberalization of the alcohol market.

The primary goal of any reform should be to increase competition. Indeed, economic theory tells us that a lack of competition generally entails a reduction in the quality of goods and services offered to consumers, since a monopoly has less incentive to improve. In the area of alcohol retailing, this lack of competition can limit the available selection of products and consumers’ access to those products, in addition to keeping prices high.

Elsewhere in Canada, various reforms have been implemented to liberalize alcohol markets, albeit incompletely. In Alberta, for example, Alberta Liquor Control Board outlets were all either sold or shut down in the early 1990s. However, private retailers must pay a markup to the government, which still controls the wholesale market.(3) In British Columbia, state-operated stores coexist with private retailers. Supply, though, remains a public monopoly.(4)

In contrast, free market situations prevail in most European countries, with retailers importing, distributing, and selling bottles in competition with one another without having to go through the state. In Belgium, for instance, a country that does not produce wine, hundreds of wine shops compete for consumers’ business. The selection of bottles is nearly three times what it is here, and prices are substantially lower.(5)

Opening the Door to Small Players

In Quebec, a first stage of liberalization should be to allow small retailers to sell any kind of wine freely. These wine shops could import their wines themselves and sell them in store without going through the SAQ or paying the associated markup.(6)

These new players could be expected to avoid competing with the SAQ on certain products for which it has an advantage—thanks to its brand name or the size of its retail spaces—and specialize in niche products to start. We could also assume that these small wine shops would try to secure market share by selling certain key products for less than the SAQ sells them, thereby putting downward pressure on prices.(7)

Consumers would benefit, since instead of having a single wine buyer (the SAQ) choosing what will be sold across the province, there would be several hundred different buyers in Quebec, giving free rein to their preferences and responding to their customers’ demand for new products. Restaurants, too, would be able to buy directly from producers,(8) both Canadian and foreign, and could pass on their resultant savings to consumers.(9)

Presently, convenience stores and grocery stores can only sell wines bottled in Quebec, which greatly reduces the selection of wines offered to consumers, their quality, and the information available about those wines.(10) In liberalizing, the government should also authorize food retailers (convenience stores, specialized shops, grocery stores, supermarkets) to sell alcohol without restriction, as French and American grocery stores do, for instance. Access to products would be improved, notably for those living in rural regions. Such a change would be beneficial not only for consumers, but also for these businesses, which could offer more choice and lower prices to their customers.

In addition to enjoying a number of alcohol outlets that is rather larger than the number of SAQ outlets alone (see Figure 1), and longer hours of operation too, consumers would be able to buy their food and their wine at the same place, which would reduce the amount of trips taken. Thus the SAQ, by operating in a market with such competitors, will be able to pursue its cost reduction efforts and eliminate less profitable outlets without affecting the availability of products for consumers. 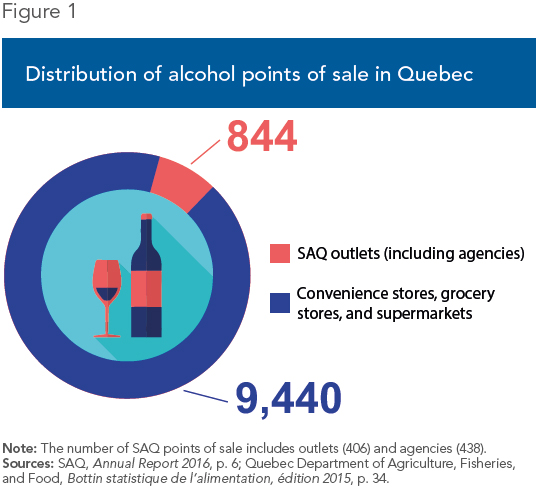 The government’s monopoly over the sale of alcohol was put in place in the time of prohibition, and no longer serves any rational purpose. It does not benefit consumers, and it stifles entrepreneurship and innovation in this market. Nor is it justified because of its fiscal contribution, since the government has other means of raising revenue.

The government should allow specialized retailers and grocery stores to sell any kind of wine freely, in competition with the SAQ, which would have complete latitude to pursue its retail activities. In addition to being politically realistic, given that a large majority of Quebecers are in favour,(11) such a reform would give Quebec entrepreneurs a chance to succeed in this market, all while increasing the available selection of products, and consumers’ access to them.

This Viewpoint was prepared by Germain Belzile, Senior Associate Researcher at the MEI, and Mathieu Bédard, Economist at the MEI. The MEI’s Regulation Series seeks to examine the often unintended consequences for individuals and businesses of various laws and rules, in contrast with their stated goals.

1. Alain Laforest, “Vers une privatisation de la SAQ ?” TVA Nouvelles, March 8, 2017.
2. Government of Quebec, Rapport de la Commission de révision permanente des programmes, June 2015, pp. 34-35.
3. Douglas S. West, “The Privatization of Liquor Retailing in Alberta,” Fraser Institute, January 2003, p. 24.
4. Since January 2017, any type of business, without restriction, can obtain a permit to sell alcohol. See British Columbia, BC Gov News, Small Business and Red Tape Reduction, New modern liquor laws come into effect.
5. See among others Frédéric Laurin, Où sont les vins ? Le problème de la distribution du vin au Québec, Hurtubise, 2009, pp. 78-82.
6. This markup averages 135% of the purchase price according to Frédéric Laurin, Yves Mailloux, and Paul Daniel Muller, Monopole Inc. : Pour une ouverture du commerce des vins et spiritueux, June 2016, p. 20.
7. Such a liberalization scenario was put forward by economist Frédéric Laurin, op. cit.,endnote 5, pp. 163-184.
8. In Quebec, “private imports” by restaurants are carried out through the SAQ. See SAQ.com, Permit Holders, Buying, Private ordering.
9. The issue of whether the price of wine would go down following such a liberalization scenario exceeds the scope of this study. On the one hand, the logic of competition means that prices would surely be lower, but as we do not know if the government would impose a tax to make up for a potential loss of its revenue, and how much it would be, it is difficult to predict where a new market equilibrium price would settle. On this latter point, it is important to note that the development of a new wine industry in Quebec could generate substantial tax revenues for the government, as could increased wine consumption by Quebecers if prices were to fall.
10. Displaying the official designation of origin on the label is permitted only for products sold at the SAQ. See Jean-Michel Genois Gagnon, “Vins d’épicerie : la bataille de l’affichage continue,” Le Soleil, November 23, 2016; Pierre Couture, “La SAQ refuse d’approuver les étiquettes de Julia Wine,” Le Journal de Québec, March 27, 2017.​
11. Some 71% of Quebecers agree that independent merchants (for example, restaurant owners, wine merchants) should be able to import wine freely and sell it directly to consumers, without having to go through the SAQ. See Leger, “Importing, selling and buying wine in Quebec,” Poll commissioned by the Montreal Economic Institute, April 2017.