In the coming days, the Quebec government will unveil its 2017-2018 budget plan. For the 2016 fiscal year, it has so far accumulated a budget surplus of $2.3 billion. One of the Liberal Party’s electoral promises was to allocate half of surpluses to tax reductions. This would be most welcome, since as shown in this Viewpoint, taxes and contributions to the public treasury have been on the rise since the beginning of the decade.

Media release: Budget 2017: Quebec must keep its promise and give taxpayers a break

Viewpoint – The 2017 Budget: Quebec Must Keep Its Promise to Reduce Taxes

In the coming days, the Quebec government will unveil its 2017-2018 budget plan. For the 2016 fiscal year, it has so far accumulated a budget surplus of $2.3 billion.(1) One of the Liberal Party’s electoral promises was to allocate half of surpluses to tax reductions.(2) This would be most welcome, since as shown in this Viewpoint, taxes and contributions to the public treasury have been on the rise since the beginning of the decade.

That same year, Quebec joined a carbon market. Although this indirect tax is paid by companies long before consumers fill up their tanks, it nonetheless raises the pump price of gasoline by around $0.04 per litre, an amount that is expected to increase further.(4) Quebecers’ “vices” are also taxed more. The provincial tax on a carton of cigarettes increased by $9.20 from 2011 to 2015 and now totals $29.80 per carton,(5) which represents about a third of the overall price.

As for the tax on alcoholic beverages, the other heavily taxed “vice,” it fell for beer and wine consumed in a bar or restaurant by $0.02 and $0.57 per litre, respectively. This reduction was counterbalanced, however, by a tax increase on alcohol sold at the SAQ, in supermarkets, and in convenience stores of $0.23 a litre for beer and $0.51 a litre for wine.(6) The choice was not an innocent one, as the majority of alcohol is sold in retail stores.(7)

Since 2012, Quebec Pension Plan contributions, paid in equal parts by employers and employees, have increased by 0.15 percentage points per year (0.90 points in all), to reach the equivalent of 10.80% of gross salary in 2017.(9) The pension plan must of course be able to honour its commitments, but many Quebecers would invest their money elsewhere if they had the choice.

The old adage according to which there is nothing as permanent as a temporary tax is also applicable to Quebec. The “temporary increase” in the compensatory tax on financial institutions, announced in 2010 and supposed to end in 2014, was increased, prolonged, and transformed on a few occasions into a “temporary contribution” and then a “temporary surtax.” A portion of these increases should end on March 31, 2017, and the rest in 2019.(10) It remains to be seen whether this will really happen. Meanwhile, this tax is mostly paid by the employees and clients of these companies, which means individual taxpayers.

The list is significantly shorter on the tax reductions side of the ledger. The health contribution was indeed abolished, but it was also created during this same period. In point of fact, the tax burden went up, if only temporarily.(11) The only real reduction therefore comes from the abolition of the tax on capital, of which only crumbs remained, and which disappeared entirely in 2011.(12) Certain tax credits were also created or increased here and there, but these essentially amount to government subsidies by another name.(13)

The end result is that Quebec continues to be the Canadian province where people are the most heavily taxed. The rate of tax pressure, namely the ratio between tax revenue and the gross domestic product, reached 37.6% in 2014. Even internationally, Quebec compares poorly, since the OECD average is 34.3%.(14) Comparing just personal income tax revenue, Quebec would come second among the most-taxed OECD countries, behind only Denmark.(15)

Finally, when it comes to corporate income taxes paid, only four OECD countries have a higher rate of tax pressure than Quebec, namely Sweden, Luxembourg, Australia, and Austria.(16)

The Effect of Income and Other Taxes

Each time the fiscal footprint increases, there are consequences for taxpayers. Small amounts and a few percentage points, on many transactions or on taxable income, can end up representing an appreciable sum that is piled on top of the already heavy burden—among the highest in the world—that Quebec taxpayers are saddled with. High sales taxes also make it more difficult for retail businesses to be competitive compared to stores located across the border.

Even if the idea of taxing them more is relatively popular, high-income individuals are often very mobile. Pushing them, with tax rates that are too high, to migrate to another province or country would deprive Quebec not only of tax revenue, but also of investment, job creation, and economic growth.

In sum, considering the numerous taxes and contributions that have gone up in recent years, the short list of reductions, and the substantial surpluses that are starting to be generated, the government has several good reasons to respect its electoral commitment to reduce taxes. In doing so, it would reduce the burden on taxpayers, all while favouring a climate conducive to economic growth. 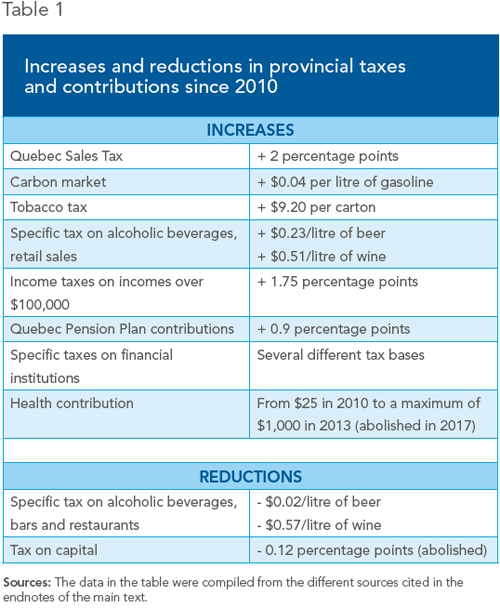 This Viewpoint was prepared by Mathieu Bédard, Economist at the MEI, in collaboration with Germain Belzile, Senior Associate Researcher, Current Affairs, at the MEI. The MEI’s Taxation Series aims to shine a light on the fiscal policies of governments and to study their effect on economic growth and the standard of living of citizens.