The criterion of social licence is a part of every debate surrounding economic development projects, especially when these include impacts on local communities or on the environment. And yet, this new concept is poorly understood, and mentioned nowhere in the law. Certain controversial projects, like pipelines or uranium mines, illustrate the potential pitfalls of social licence and remind us that the demands of some players frequently go beyond this framework.

The Three Pitfalls of Social Licence

The criterion of social licence is a part of every debate surrounding economic development projects, especially when these include impacts on local communities or on the environment. And yet, this new concept is poorly understood, and mentioned nowhere in the law. The federal government has nonetheless announced its intention to include a social licence requirement in environmental assessments.(1)

It seems evident that economic projects, especially large-scale ones, must take into account their impacts on certain communities in order to minimize them. When the concept of social licence refers to support for a project that evolves in this rational framework, this is unproblematic. Yet certain more controversial projects, like pipelines or uranium mines, illustrate the potential pitfalls of social licence and remind us that the demands of some players frequently go beyond this framework.

As recently as 1997, the concept of social licence described the realities experienced in developing countries, without modern rule of law, where institutions are untrustworthy. Clearly, the meaning of social licence in current debates in Canada is already a step removed from this definition.(2)

The concept of social licence is not used by the National Energy Board, nor by Natural Resources Canada. Environment Canada referred to it just once in 2010 to describe the behaviour of companies.(3) No official definition is given, and the country’s laws and regulations make no reference to it.

This does not prevent it from being increasingly echoed in political discourse, for instance when Prime Minister Justin Trudeau declared during the last election campaign that “[w]hile governments grant permits for resource development, only communities can grant permission.”(4)

Companies themselves often adopt a proactive and transparent approach to winning local support, consulting stakeholders and convincing them that a project will also be in their interest, or improving the said project. This is an example of responsible behaviour.(5)

Without this kind of process, the reputation of a firm can suffer, and its products can be targeted by a smear campaign, if not a boycott. Its ability to attract capital and a qualified workforce can also be affected. In the worst-case scenario, a project’s developers run the risk of seeing their operations disrupted, facing legal proceedings, or having the government impose new regulations on them.(6)

In practice, the lack of a clear, agreed-upon definition of social licence means that developers, residents, environmental activists, and governments all use the term to denote different perspectives.(7) Some see it as a voluntary process, while others define social licence as the ongoing acceptance or approval of a project among a local community and other stakeholders.(8) Others even see a necessity to obtain the support of all communities that a project could affect, including aboriginal nations,(9) which amounts to a local veto right over large-scale projects.

In addition to the federal government’s intention to include the notion of social licence in environmental assessments, which remains unspecified for the moment, a formal definition is included in a Quebec government policy proposal: “Social licence is essentially the result of a process of consultation in which developers, elected officials, organizations, groups, and citizens discuss the conditions allowing a development project to be carried out, or not.”(10)

This definition remains vague. A certain degree of agreement is assumed between the parties regarding relevant conditions, which requires good faith on both sides, even an openness to compromise. Yet defining good faith is not obvious.

The definition seems to indicate that only participants in the consultation process will be a part of the discussion, which implicitly favours organized, professional activists. The predictable result, already evident, is to give a disproportionate advantage to the most radical groups, which are also the least inclined to compromise.(11)

This policy proposal also mentions that the government retains the ultimate responsibility for authorizing, or not, a project according to conditions that it determines.(12) In other words, it is unavoidable for the government to judge the good faith of the parties, although there is a risk of arbitrary decisions. For even the ultimate governmental decision is no guarantor of a rational or predictable process. One need only think of the multiple reversals of the current Quebec government on hydrocarbon development.(13)

The imprecision of the concept of social licence means that stakeholders—project developers first and foremost—don’t know how to obtain it, who grants it, or if it can be called into question once obtained.

The legal framework for the approval of a large-scale project is already burdensome and complex. This kind of project has consequences on many levels, and has certain particularities that justify a detailed review. However, the entire legitimacy of this framework rests on balancing two needs: that of rigorously studying the consequences of the project, and that of keeping the process predictable, simple, and quick in order to limit the risks for investors.(14)

The current process, since it is led in part by institutions with a certain independence, allows for the evaluation of whether or not a project is in the public interest.(15) Once all the steps have been completed, the analysis of the project should allow the various interests to be weighed, a particularly complex task for certain infrastructure projects like railroads and pipelines. Indeed, with such projects, the benefits are concentrated at the endpoints, whereas impacts will be felt all along the route with few direct benefits for these communities.(16)

The addition of a second process integrated into the first and looking specifically at social licence threatens the balance between the need for rigour and the need for predictability. The risk for an investor is to see a project receive all of the required approvals, obtain all of the necessary permits, fulfill all of the stipulated conditions, and still be refused. The final call would essentially become subject to arbitrary governmental decision, and the first process would lose some of its meaning.

This result is no longer theoretical. It is the very charge levelled against the Quebec government by the developers of a uranium mine in a trial that began recently. Strateco Resources had obtained 22 permits in anticipation of exploiting a deposit north of Chibougamau and had spent close to $150 million, only to have the government backtrack under pressure from some North Shore doctors, among others.(17)

The way this story played out—a nightmare for all investors—illustrates the very real risk of the process degenerating into mob rule in which scientific details are reinterpreted and distorted by activist organizations in order to scare local communities, to the detriment of the public interest.(18)

Perversely, it is these same groups that use the fear they themselves have generated to conclude that there is a lack of social licence.(19) As this is more of a political arena than a technical one, perception is everything, even if it is due to disinformation. Greenpeace, for example, has propagated false information in the past, for which it had to apologize.(20)

For politicians, the concept of social licence is convenient, since it places on the developer’s shoulders the task of making sure the project is not only legal, but also legitimate, and even politically favourable.(21) Politicians can therefore use the pretext of a real or perceived lack of social licence to avoid having to make an unpopular decision. The door is thus opened to populism and to arbitrary decisions, to the detriment of science and the rule of law.

Third Pitfall: A Threat to the Rule of Law

Controversial projects are never easy to resolve to the benefit of society as a whole. In practice, the closely supervised and heavily regulated procedures surrounding each major infrastructure or natural resource extraction project constitute the democratic response to possible tensions. The call for social licence could represent a symptom of the loss of confidence in this process.

In public debates, the divergent interests that are expressed often refer to very personal conceptions of what justice is. The “not in my backyard” phenomenon is a telling example. But the application of the law does not allow everyone to obtain everything he or she wants; it only ensures that one’s rights are respected.

Certain communities can also see in the demand for social licence an opportunity to obtain compensation that is not motivated by inconveniences or by the legal framework. For example, Kinder Morgan will pay the government of British Columbia between $25 million and $50 million annually for 20 years, which amounts to a kind of ransom.(22) If each province or each municipality along a pipeline asks for its “fair share” in this way, projects will soon become impossible to carry to completion. The consequences for interprovincial and international trade would quickly be felt.

When there are real inconveniences associated with a project, it is logical to want to minimize them, on the one hand, and to ask for just compensation on the other. On the basis of respect for private property and free negotiation, it is generally possible to find a reasonable common ground. Nonetheless, this illustrates the potential for the concept of social licence to drift toward a kind of legalized extortion.

While politicians can be made aware of the particular situations of certain citizens and of the views of certain groups, the courts have already issued a warning that the public interest is not based solely on what the public wants.(23) Both supporters of a project and its opponents must accept that not all decisions will always be in their favour. In a democratic society, respect for the rules of the game which are the laws, regulations, and institutions entrusted with guiding the resolution of conflicts is essential.

Through a fuzzy and uncertain definition of social licence, rights can be violated, notably by arbitrary decisions that are substituted for uniformly applied laws and regulations. This runs counter to the very principle of the rule of law, a principle so essential that it is featured in the preamble to the Canadian Charter of Rights and Freedoms.(24)

Ultimately, it is up to the government to establish the rules that allow the public interest, as well as particular and local interests, to be taken into account. While the institutions are far from perfect,(25) the countervailing power of citizens is not found in arbitrary decisions and fits of temper, but in the legal defence of their rights, and ultimately in their role as voters. 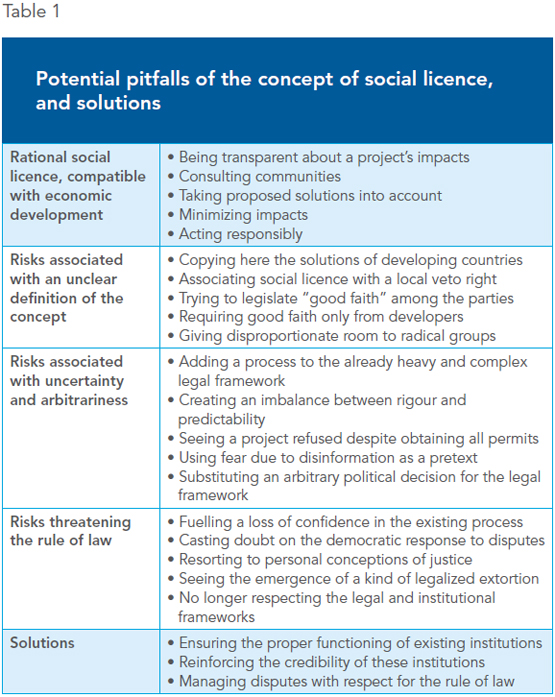 In Canada, natural resources are abundant, to our great economic benefit.(26) However, it is becoming increasingly difficult to develop new natural resource extraction or major infrastructure projects. The existing approval processes, already rigorous, play their role relatively well through independent organizations and consultations based on the greatest possible transparency, and by leaving the final decision in the hands of governments, which are beholden to voters come election time. Erecting new obstacles to economic development has significant risks, especially given that the notion of social licence is neither clear nor useful in resolving disputes.

Governments would be better off ensuring the proper functioning and the credibility of existing institutions like Quebec’s Bureau d’audiences publiques sur l’environnement (BAPE) and the National Energy Board rather than adding another bureaucratic layer and opening the door to all kinds of pitfalls. Dispute management must respect the rule of law, including the fundamental rights of all but also property rights, as well as the other foundations of a free and democratic society.

This Economic Note was prepared by Youri Chassin, Economist and Research Director at the MEI, in collaboration with Germain Belzile, Senior Associate Researcher at the MEI. The MEI’s Regulation Series seeks to examine the often unintended consequences for individuals and businesses of various laws and rules, in contrast with their stated goals.