Since last fall, the Canadian health care system has once again become a source of bickering. The federal government, which is a significant funder of the provinces’ health programs, wants to limit the rate of increase of its transfers and force provinces to spend on specific areas like mental health and home care. The territories and certain provinces have bowed to pressure from Ottawa, but four of the five most populous provinces are still refusing the federal offer. While it is political in nature, economic analysis of this conflict can provide some useful insights.

Viewpoint – Why Ottawa Should Respect Provincial Jurisdiction over Health Care

Since last fall, the Canadian health care system has once again become a source of bickering. The federal government, which is a significant funder of the provinces’ health programs, wants to limit the rate of increase of its transfers and force provinces to spend on specific areas like mental health and home care. The territories and certain provinces have bowed to pressure from Ottawa, but four of the five most populous provinces are still refusing the federal offer.(1) While it is political in nature, economic analysis of this conflict can provide some useful insights.

Health Insurance from Coast to Coast

Following the experience of Saskatchewan, which was the first province to set up a public health insurance plan, the federal government started to push the other provinces in the same direction in the late 1950s and early 1960s. Health care being a provincial jurisdiction, Ottawa decided to offer financial transfers to entice them, with certain conditions attached.(2) Over the years, the size of these transfers has increased considerably, such that they will exceed $35 billion this year. Transfers, and hence the federal share of spending, have also increased faster than total provincial and territorial spending on health care (see Figure 1). 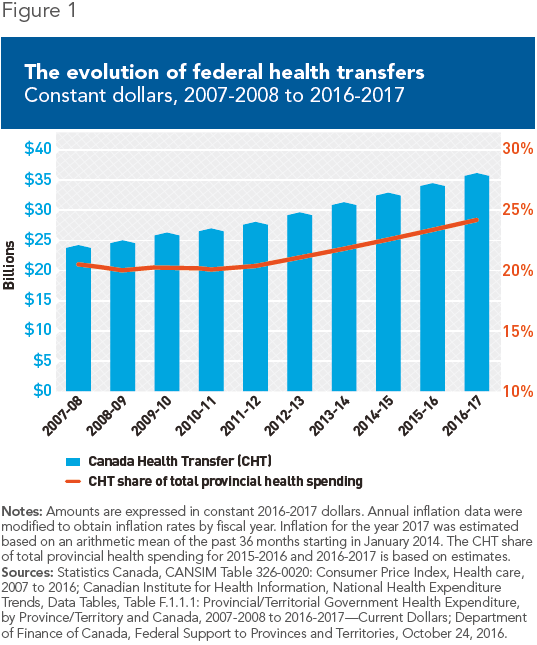 At the end of its last mandate, the Conservative government limited the annual increase in the transfers to 3% starting in 2017, instead of 6% as had been the case since 2004. The current Liberal government’s intention to limit this increase to a little over 3%, and also to force provinces to spend certain amounts in specific areas, is the source of the present dispute.(3)

Each province created its own health insurance system, and each province manages its own system and adopts the laws that govern it. Despite Ottawa’s involvement, nothing prevents a province from changing its system as it sees fit. Politically, it is provincial governments that must face their electorates and justify their actions. Again, nothing stops provinces from making decisions that are contrary to the federal government’s wishes and that would please their voters.

The federal government’s only lever for influencing the provincial health systems remains the threat of reducing transfers to recalcitrant provinces. This threat is strong enough to make the provinces fall in line each time Ottawa reins them in. From an economic perspective, this federal interference poses a problem.

The Principle of Subsidiarity

One of the fundamental principles of fiscal federalism is subsidiarity.(4) This ancient principle, firmly rooted in many institutions,(5) basically means that the responsibility for a public action is entrusted to the authority that is closest to those concerned. Applied to a federal framework, this means that a central authority should only take care of political, social, and economic problems that cannot be dealt with by more local authorities.

In Canada, federal jurisdiction over the currency and defence, and provincial jurisdiction over education and health care, can certainly be explained by this principle of subsidiarity: defence and currency are by definition national responsibilities, whereas educational and medical competencies are exercised locally.

A corollary of the principle of subsidiarity is the financing of services by the authority that dispenses them. Subsidiarity can therefore be understood as a decentralization of decisions along with the autonomy to collect taxes to provide the related public services, which makes sense for several reasons.

First, just as consumers are better served by competitive markets than by monopoly situations, so too do citizens benefit from the competition produced by the decentralization of decisions. In the case of the Canadian federation, decentralization “introduce[s] into political order the disciplinary pressure of competition”(6) between governments, which encourages innovation. Conversely, a uniform national health policy reduces the opportunities for experiments and discoveries of best practices and ways of delivering services.

Second, decentralization makes political decision-makers more accountable. If they choose to spend more in an area under their jurisdiction, they must also tax people more. In principle, this direct link between taxation and services leads decision-makers to a certain moderation, and encourages them to make sure that the population gets its money’s worth.

Third, the principle of subsidiarity makes politicians more attentive to the wishes of voters in their region. If there are important differences in the preferences or needs of people in different provinces, it will be easier to adjust provincial policies to these differences than to adjust a single national policy.

The Canadian Constitution takes into account the principle of subsidiarity. Historical circumstances, such as the emergence of the controversial notion of Ottawa’s “spending power,” favoured the intrusion of the federal government in the health care sector, an area of provincial jurisdiction. Health transfers, with federal strings attached, violate the principle of subsidiarity and make Canada’s public health care system less efficient.

Now that health insurance is provided from coast to coast, it’s time for the federal government to withdraw from this sector and free up the fiscal space that it occupies on this issue, making room for the provinces. Each of these could then decide for itself the best way to provide health care services to its population.

This Viewpoint was prepared by Germain Belzile, Senior Associate Researcher, Current Affairs, at the MEI, in collaboration with Jasmin Guénette, Vice President of the MEI. The MEI’s Health Care Series aims to examine the extent to which freedom of choice and private initiative lead to improvements in the quality and efficiency of health care services for all patients.