Donald Trump’s recent statements regarding the investments of auto industry giants and vehicle imports from Mexico have created significant uncertainty in Canada. His threat to impose tariffs at the U.S.-Mexico border to protect the American auto industry raises the possibility that Canada might also be affected by such a measure. If this were to happen, the economic consequences could be very harmful for both Americans and Canadians, since after half a century of trade liberalization, the two countries’ automotive industries are now completely integrated.

Viewpoint – Is President Trump a Threat to Canada’s Auto Industry?

Donald Trump’s recent statements regarding the investments of auto industry giants and vehicle imports from Mexico have created significant uncertainty in Canada.(1) His threat to impose tariffs at the U.S.-Mexico border to protect the American auto industry raises the possibility that Canada might also be affected by such a measure. If this were to happen, the economic consequences could be very harmful for both Americans and Canadians, since after half a century of trade liberalization, the two countries’ automotive industries are now completely integrated.

From the Auto Pact to NAFTA

In the early 1960s, the Canadian auto industry was fettered by substantial tariff barriers. A limited number of companies produced few vehicles, and these were intended almost exclusively for Canadian consumers. Total Canadian production was just 379,000 vehicles a year at the time, whereas it was estimated that a factory needed to manufacture at least 300,000 units of a single model to obtain substantial economies of scale. As a result, a car purchased in Canada was up to 50% more expensive than if it had been purchased in the United States, and Canadian consumers had access to a smaller selection of models.(2)

In 1965, a trade dispute between the United States and Canada led to the ratification of the Auto Pact between the two countries. By substantially reducing customs duties, this agreement allowed the big automakers as well as their suppliers to integrate their facilities on both sides of the border. This cross-border integration and the reorganization of production that it entailed allowed for a more efficient allocation of resources stemming from a higher level of specialization and economies of scale.(3) The opening up of the border also encouraged the expansion of the automotive industry’s supply chains, such that a wider variety of suppliers from both countries were able to be involved in the manufacture of a single vehicle.(4)

The integration of the North American automotive market became even more pronounced with the entry into force of NAFTA in 1994, which superseded the Auto Pact. The latter was abolished in 2001 when certain of its provisions were declared illegal by the World Trade Organization.(5)

Integration Is a Source of Prosperity

Since NAFTA came into effect, the total value of the Canadian auto industry’s production and exports has increased substantially. Accounting for inflation, total production for assembly plants and parts suppliers grew from $51.2 billion in 1992 to $92.7 billion in 2015, an 81% increase.(6) At the same time, exports grew by 72% and now total no less than $77 billion.

This increase is explained primarily by a greater trade volume between Canada and its NAFTA partners. The American market alone represents 96% of Canadian exports in this industry. The rest is divided more or less equally between Mexico and all other countries.(7)

Consequently, the Canadian auto industry is highly dependent on its next-door neighbour when it comes to maintaining its production level and the 125,400 direct jobs connected to it.(8) The reverse is also true, since American automotive exports to Canada totalled over $62 billion in 2015 (see Figure 1). 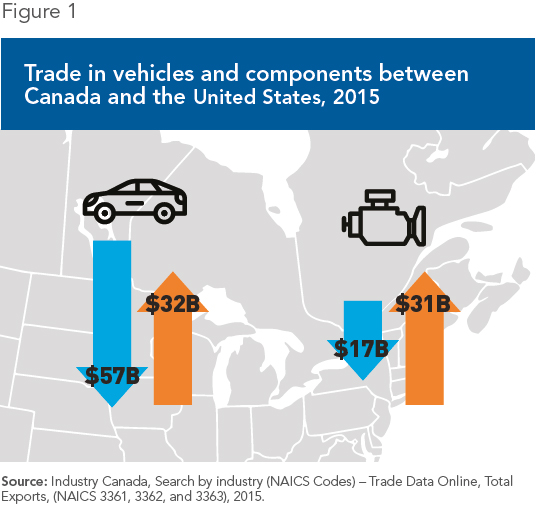 Trade between the two neighbours is in fact highly concentrated between Ontario, where almost all of Canadian automotive manufacturing and jobs are located,(9) and the neighbouring state of Michigan.

This strong growth in production shows the importance of the integration of Canadian and American plants located near the border. A part initially manufactured in Canada can cross the Canada-U.S. border several times before final assembly. The part becomes an element of a component, and ultimately of a vehicle. Each stage of the process is carried out by a multitude of highly specialized companies.

The level of integration of assembly plants and suppliers located on either side of the border is such that the imposition of customs duties would break these connections and would be very costly for both countries.

Large American manufacturers like Ford, Fiat Chrysler, and General Motors have many assembly plants in Canada. Their competitiveness depends heavily on the economies of scale made possible by the expansion of the supply chains that they have established with Canadian parts suppliers.

The imposition of restrictions at the Canada-U.S. border might lead to some short-term gains for a limited number of American workers, but consumers will have to pay more to purchase the same vehicle. Over the longer term, the relative competitiveness of companies located in the United States could be reduced as compared to Japanese, South Korean, and European manufacturers. If this happens, the number of vehicles produced on American soil could fall, and jobs would be lost.

For all these reasons, it is clearly not in the economic interest of the United States to jeopardize the integration of the American automotive industry with the Canadian industry, nor with the Mexican industry, for that matter. It remains to be seen if other, more political considerations will motivate the new Trump administration to nonetheless adopt protectionist measures.

This Viewpoint was prepared by Germain Belzile, Senior Associate Researcher, Current Affairs, at the MEI, and Alexandre Moreau, Public Policy Analyst at the MEI.