A strike of fast food restaurant employees in New York in 2012 gave birth to a movement demanding a substantial increase of the minimum wage in the United States, calling for it to rise to $15 an hour. Since then, several cities and states have established timelines for raising the minimum wage to that symbolic threshold. In Quebec, the major labour unions have taken up the charge, along with the symbolic $15 target. Many analysts who have commented on this debate have pointed out that a large number of jobs would be threatened if the hourly minimum wage rose rapidly from its current level of $10.75 to $15.

Media release: $15 minimum wage: The 25 RCMs where jobs are most at risk

Would a $15 Minimum Wage Accelerate the Rural Exodus?

A strike of fast food restaurant employees in New York in 2012 gave birth to a movement demanding a substantial increase of the minimum wage in the United States, calling for it to rise to $15 an hour.(1) Since then, several cities and states have established timelines for raising the minimum wage to that symbolic threshold, including New York, San Francisco, Seattle, Los Angeles, and Washington, D.C., as well as the province of Alberta.(2) In Quebec, the major labour unions have taken up the charge, along with the symbolic $15 target.(3)

Many analysts who have commented on this debate have pointed out that a large number of jobs would be threatened if the hourly minimum wage rose rapidly from its current level of $10.75 to $15. Indeed, an employee’s work creates additional value for an employer, but if that value is less than the employee’s salary, it is not in the company’s interest to employ him or her.

Whether we adopt one estimate or another, the effect of this policy on the province’s rural regions can shine a light on the extent of its negative impact. Indeed, the jobs at risk represent a disproportionate share of rural employment, and such a measure could very well accelerate the rural exodus.

Different Effects from One Region to Another

The minimum wage, which is determined by the Quebec government for the entire province, does not affect all regions the same way. This is due to the fact that the volume of economic activity is not the same across Quebec.

These developmental differences affect the job market. Rural areas in particular are often places where productivity is low.(5) This is not due to workers and the quality of their work, but to economic conditions in the region. As a result, wages are generally lower in rural areas than in big urban centres.

The wage levels that businesses are able to offer are largely due to the region in which they are located. Generally, business opportunities are more numerous for companies located near big urban centres, and the wages offered there are higher. Despite this difference between big urban centres and rural regions, the minimum wage is applied uniformly across the province, thus having particularly negative effects on employment in rural regions.

Although these effects are always present when there is a minimum wage, some analysts estimate that they are small at the current level of $10.75.(6) However, if the minimum wage were set at a much higher level, like $15 an hour, these effects could quickly become much more apparent.

The portion of the labour force currently earning wages below the $15 threshold would be placed at risk by such an increase.(7) For these at-risk jobs, several economic adjustments are possible. Some employees would indeed keep their jobs and see their wages rise to $15 an hour. However, their workload could increase or include greater responsibilities. Others would lose their jobs, have their hours cut back, and/or receive fewer non-monetary benefits like the training, rebates on uniforms, or free meals that certain employers offer.(8)

The difference between the volume of economic activity in the big urban centres of Quebec and the province’s rural regions suggests that at-risk workers in regional county municipalities (RCMs) in and around large cities will be affected by less painful kinds of adjustments, whereas workers in rural regions will be affected by more difficult adjustments like job losses.

Moreover, in big urban centres, minimum wage increases mainly affect the young, often students working part-time, whereas in rural regions these increases especially affect low-income adults. Although certain analysts downplay the gravity of job losses for the young,(9) job losses for workers who may have families to support are far more serious. In rural regions, these would be the main victims.

Figure 1 presents the percentage of the labour market that would be placed at risk by such a minimum wage increase in the 25 most-affected RCMs if it were implemented in 2017.(10) Given that wages increase naturally year after year, the more this measure is delayed, the more its negative effects are reduced. But even if the increase were to happen in 2021, the at-risk population would still be sizable. In the Rocher-Percé RCM, for example, 56% of the labour force between 25 and 64 years of age would be at risk if this increase were implemented in 2017, versus 46% in 2021.(11) 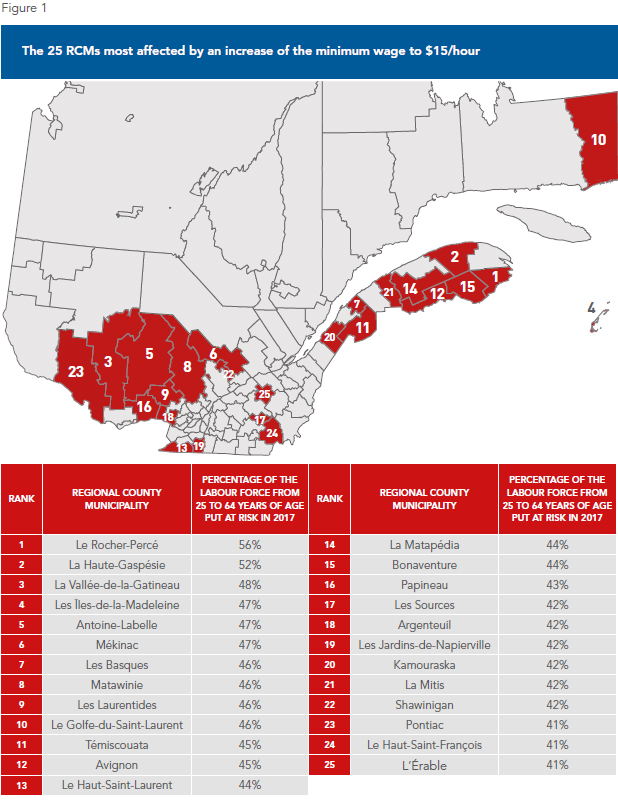 The share of the labour market that would be at risk because of such an increase is much smaller in the RCMs surrounding the big urban centres of Montreal, Quebec, and Ottawa–Gatineau.

– It reduces employment among the young and among unqualified workers, since the labour of such workers often creates low added value.(12)

– Since it increases unemployment, it encourages participation in certain criminal activities, especially among the young.(13)

– Since businesses often have to raise their prices in order to be able to increase wages, it makes the prices of consumer goods go up in such a way as to disadvantage the low-income workers it is supposed to help.(14)

– Since in periods of recession the revenues of businesses fall, but the minimum wage remains fixed, it aggravates economic crises for workers at the bottom of the salary range.(15)

– Finally, it encourages young people to drop out of school by making entry-level salaries on the market more attractive, for those who manage to find a job.(16)

As we have just seen, it would also have the effect of discouraging rural economic development, thus accelerating the rural exodus which certain regions of Quebec have been struggling with since the middle of the 20th century.

There are other policy tools, some of which already exist in Quebec, that do not have these negative effects and can achieve the same objective of helping low-income workers. There is, for instance, the option of raising the basic personal amount on which no one pays income tax, or increasing and expanding the eligibility conditions for the solidarity tax credit or the work premium. These measures have much fewer negative side effects.

While bolstering these programs would entail a certain financial sacrifice on the part of the government, at least it would avoid negatively affecting businesses and a substantial portion of the workers we want to help. Resorting to these tools would also have the benefit of not creating a veritable “atomic bomb” striking the most economically vulnerable regions of Quebec, to borrow economist Pierre Fortin’s expression.

This Economic Note was prepared by Mathieu Bédard, Economist at the MEI, and Alexandre Moreau, Public Policy Analyst at the MEI. The MEI’s Regulation Series seeks to examine the often unintended consequences for individuals and businesses of various laws and rules, in contrast with their stated goals.