The status of nurse practitioners who specialize in front-line care, also known as “super nurses,” authorizes these health professionals to make diagnoses and to prescribe certain drugs. They have thus been delegated powers formerly restricted to medical doctors. Among the 225 super nurses practicing in Quebec in 2015,(1) some have even opened clinics bringing together nurses and health professionals without a doctor on site to oversee their day-to-day activities. In a health care system characterized by a bureaucratic approach, rationed services, and less-than-ideal access to care, the case of clinics led by nurse practitioners illustrates just how difficult it is for innovative solutions to establish themselves.

The Difficulty of Accessing Front-Line Care

The first point of contact with the health system, the front line is of strategic importance in improving access to care, and also in directing patients toward the appropriate care, including specialized care. The purpose of front-line care offered outside of hospitals, by private practices, pharmacies, medical clinics, and community centres among others, is to ensure disease prevention and health promotion, all while providing various treatments on an ongoing basis.

The desire to develop front-line care outside of hospitals is not a recent phenomenon. Since the start of the 1970s, it has been the driving force behind the establishment of local community service centres in Quebec (known by their French acronym, CLSCs) and the parallel development of private practices. To make up for certain shortcomings of CLSCs, the government decided in the early 2000s to develop family medicine groups (FMGs) that work in close collaboration with nurses. Today, 293 CLSCs, around 250 FMGs, and over 800 private practices make up the main front-line care network in Quebec, along with 118 hospitals.(2)

Despite the greater and greater resources devoted to it for over twenty years now, the difficulty of accessing front-line care is the Achilles heel of Quebec’s health care system. Waiting times to obtain required care remain as worrisome as ever. According to data from the Commonwealth Fund’s 2015 international studies of health care policies, barely 13% of family doctors in Quebec report that their patients can obtain an appointment the same day or the next, compared to 37% of their Ontario colleagues.(3) Moreover, around one quarter of the Quebec population does not have a regular family doctor, the highest proportion among the ten Canadian provinces.(4)

The lack of access to front-line health care services can have direct consequences on the health of individuals. Annually, over 21,000 hospitalizations could be avoided in Quebec with better access to front-line care.(5) A better organization of this care could also minimize the number of deaths indirectly attributable to a lack of access, which amount to 16,398 per year.(6) Moreover, in Canada, 21% of emergency room visits are potentially avoidable,(7) cases that could often be handled by nurse practitioners who specialize in front-line care, alone or in collaboration with a doctor(8) (see Table 1).

What Is a Nurse Practitioner Specializing in Front-Line Care?

The presence of nurse practitioners has the potential to greatly improve access to front-line care. The existence of a specialization in front-line care began in 2007 in Quebec, following an agreement with the Ordre des infirmières et infirmiers du Québec and the Collège des médecins du Québec.(9) Previously, there were a few nurse practitioners in three specializations: neonatal care (medical problems of newborns, including congenital diseases and premature births), nephrology (diseases of the kidneys), and cardiology. In 2008, however, there were just 29 of them in the entire Quebec health care system.(10)

These three specializations are practised almost exclusively in hospitals. The front-line care specialization therefore opens up new possibilities, like practising this profession in clinics, outside of hospitals.

Obtained through master’s level studies in nursing and the acquisition of an advanced graduate diploma,(11) this status allows nurses to practise five additional activities usually restricted to doctors, namely:

Many of these relatively frequent and minor health problems still lead to emergency room visits for those who do not have a family doctor or who cannot get an appointment quickly. The role of nurse practitioner allows for improved responses to these emergencies and thereby increases access to front-line care. The same logic of loosening up rigid rules underlies increasing the role of pharmacists, another avenue currently being pursued.(15)

Several countries granted nurses additional responsibilities long before Quebec. In England, certain nurses have been able to prescribe drugs since the 1990s. Norway has had nurse-led clinics for a certain number of years now.(16)

Closer to home, as of March 2015, Ontario had 2,587 specialized nurse practitioners, 1,897 of whom were specialized in front-line care.(17) The province’s government encourages the creation of clinics run by nurse practitioners. It announced the establishment of 25 of these clinics in February 2007, with a capacity of serving 40,000 patients. The first of them saw the light of day in 2009.(18)

Nurse practitioners direct the activities of different health professionals without a doctor on site. Nonetheless, a collaborating family doctor is available for cases that exceed their level of expertise.

The Ontario Government sees in these clinics a solution for improving access to family health care, particularly for Ontarians who do not have a family doctor.(19) These clinics can play several useful roles in a flexible approach that responds to the needs of their clienteles. Among other things, they help steer patients through the health care system by directing them toward the appropriate second-line services. They also respond to a need for prevention, for example by participating in cancer screening strategies or by taking charge of cases of chronic illness.

The contrast between the Quebec and Ontario approaches can be clearly seen by comparing the number of nurse practitioners specializing in front-line care in the two provinces, Ontario having eight times more of them (see Figure 1). The same is true for the number of clinics led by super nurses. In the course of preparing the present Economic Note, we counted six in Quebec versus over 25 in Ontario.(20) 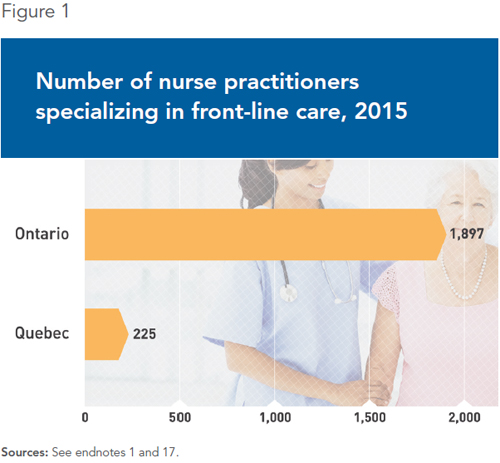 The proactive approach adopted by the neighbouring province contrasts strongly with that of Quebec’s Health Department. The latter recognizes the ability of nurse practitioners to work without the physical presence of a physician supervising their work, but wants to keep to the FMG model.(21)

However, the operation of FMGs is governed by a multitude of rules characteristic of a centralized approach rather than by the flexible framework of a liberalized approach. For example, there are rules mandating that they offer services 68 hours a week, specifying attendance rates to be respected, or stipulating a certain weighting of admissions based on the severity of cases taken on.(22)

Initiatives such as clinics led by super nurses, since they do not correspond to this precise framework, are not financed by the Department of Health and Social Services.

Yet for the same medical act, a nurse practitioner costs the health care system around 1/3 of what a general practitioner costs. While a GP can count on an average gross income of $264,000, the most experienced super nurse gets $93,700.(23) A less rigid organization of health care services would take advantage of this discrepancy to optimize the use of resources, especially given that according to certain studies, anywhere from 25% to 70% of the work of non-specialist doctors providing front-line care could be carried out by nurses, with subsequent referrals to doctors if necessary. Clinics led by nurse practitioners report that they require the supervision of their affiliated doctor in less than 5% of cases.(24) In other words, their existing skills are sufficient for responding to a large number of minor health problems in a relatively autonomous manner.

Furthermore, super nurses in Quebec cannot work more than 35 hours a week in the public sector. It is possible to work additional hours beyond these 35 in a private clinic, however, which explains the emergence of several of these clinics in Quebec over the past year. Private clinics offer greater flexibility than the public system and make fuller use of all of the capabilities delegated to nurse practitioners.(25)

There are other irritants as well: the low number of spots available in educational programs for nurse practitioners, the lack of recognition by the province’s public auto insurer (SAAQ) and its worker’s compensation board (CSST), and restrictions on the list of drugs that they can prescribe.(26)

Resistance to change also deserves to be mentioned. According to Dr. Louis Godin, President of the Fédération des médecins omnipraticiens du Québec, the proper role of nurses is limited to helping and supporting doctors. Innovations like nurse-led clinics have “no place in the health care system” according to him, even though patients are flocking to them.(27)

To alleviate the lack of access to family doctors and to front-line care in general, it is crucial that the available resources be used in the most efficient way possible. Nurse practitioners who specialize in front-line care represent a solution for those who do not have easy access to a family doctor, and the clinics that they run respond to just such a demand.

Unfortunately, the bureaucratic approach to front-line care adopted by the Quebec Government does not allow the emergence of new treatment models. If it instead adopted a liberalized approach and placed more trust in professionals on the ground like pharmacists, doctors in FMGs, and super nurses, access to front-line care would be improved, as would the overall quality of Quebec’s health care system.

This Economic Note was prepared by Youri Chassin, Economist and Research Director at the Montreal Economic Institute, who holds a master’s degree in economics (Université de Montréal), and Alexandre Moreau, Public Policy Analyst at the MEI. The MEI’s Health Care Series aims to examine the extent to which freedom of choice and private initiative lead to improvements in the quality and efficiency of health care services for all patients.