10. How do Canadian provinces fare in terms of GHG emissions per capita?

In 2013, the provinces that emitted the most GHGs per capita were Saskatchewan and Alberta, with 68 and 67 tonnes of CO2 equivalent respectively. These elevated figures are essentially due to the substantial amount of oil production in these two provinces. Indeed, 76% of oil produced in Canada is produced in Alberta, whereas Saskatchewan, which represents around 3% of the Canadian population, produces 15% of Canadian crude oil.(17) Quebec is the province that emits the lowest amounts of GHGs per capita, at 10 tonnes of CO2 equivalent, thanks to its extensive production of hydroelectricity (see Figure 1-7). 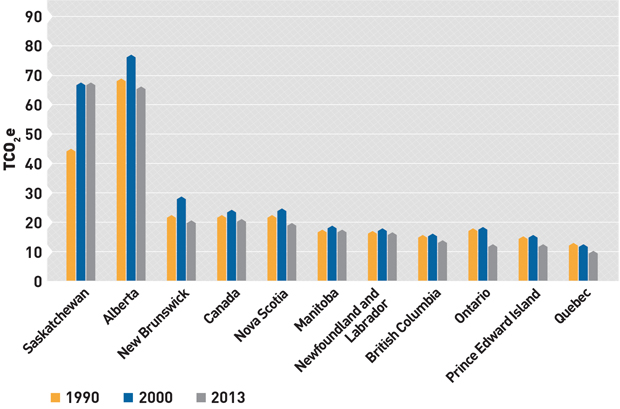