Montreal, October 25, 2007 – Nine of the 10 fastest improving schools in Quebec are public schools, according to the 2007 Edition of the Report Card on Quebec’s Secondary Schools, released today by the Montreal Economic Institute and The Fraser Institute and, two independent research organizations.

The annual report card collects a variety of objective indicators of school performance into one easily accessible, public document that allows parents, school administrators, teachers, students, and taxpayers to analyze the academic performance of students at individual schools and also to compare each school’s results with those of other schools. The Trends indicator shows whether a school’s results have improved or deteriorated over the past five years.

Among the top 10 fastest improving schools are schools serving families with relative low income levels, schools with a high proportion of special needs students, and schools that have climbed in the ratings from near zero levels just a few years ago.

“These fast improving schools are an inspiration to other schools across Quebec. Their performance clearly shows that improvement is possible regardless of the challenges that the school’s students face or of the historical levels of achievement that the school has experienced,” Tasha Kheiriddin, The Fraser Institute’s Directrice, Quebec et la Francophonie.

The Report Card also identifies schools that show statistically significant decline in their results over the past five years. By bringing this decline to the attention of everyone interested in the school, the report card can help to stop the downward trend.

“Declines like these call for immediate action to improve and parents, teachers, and administrators should all be aware of the schools’ improvement plans and the part that each must play in them,” said Peter Cowley, The Fraser Institute’s Director of School Performance Studies and co-author of the Report Card.

The Bulletin des écoles secondaires also shows that schools with students coming from lower-income households can achieve good results, as measured both by the Value Added Indicator and the overall rating. Value Added is an estimate of the school’s contribution to its overall rating out of 10. It is calculated by subtracting the estimated effects of socio-economic conditions (whether positive or negative) and of the personal characteristics of students (such as late entry) from the school’s overall performance.

Of the 105 schools in the lowest quarter based on parental income, 25 achieved an «A» on the Value Added indicator. Among these 25 schools, 16 scored higher than average on their overall rating out of 10.

“We should applaud these schools. They have shown that good academic results aren’t found only in rich neighbourhoods,” said Marcel Boyer, Vice-president of the Montreal Economic Institute and co-author of the Report Card. 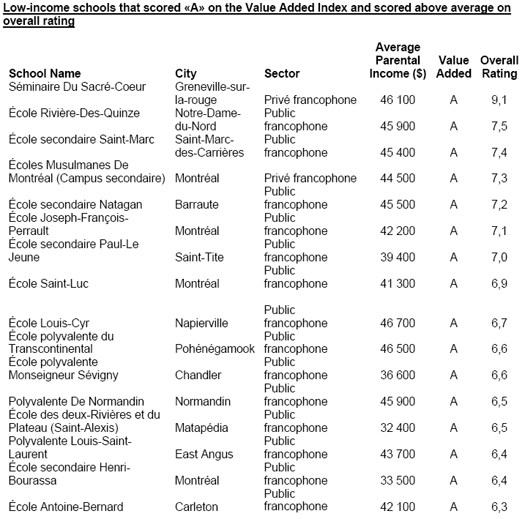 Easy comparisons of the performance of different schools can be made using the Bulletin interactif des écoles secondaires du Québec, an interactive web-based tool available online at www.lactualite.com that lets parents, teachers, and school and district administrators review a school’s academic performance based on overall school ratings or detailed, course-by-course student results. The schools’ results are presented instantly in an easy to read, full-colour chart clearly illustrating how the school is doing. Each chart includes up to 12 years of historical data showing how the school performs over time.

The complete rankings of the schools and detailed results (in PDF) can be viewed at www.fraserinstitute.org and at www.iedm.org.

The Fraser Institute is an independent research and educational organization based in Canada. Its mission is to measure, study, and communicate the impact of competitive markets and government intervention on the welfare of individuals. To protect the Institute’s independence, it does not accept grants from governments or contracts for research. Visit www.fraserinstitute.org

The Montreal Economic Institute (MEI) is an independent, non-profit, non-partisan research and educational institute. MEI is the product of a collaborative effort between Montreal-area academics, economists and entrepreneurs. For more information, visit www.iedm.org